I bet that, while most people remember details of the day they met their future spouse, most don't remember the actual date. The only reason that I remember the date is that I was keeping a journal of my time in Denmark at the time. Each week I emailed my journal for the week in MS Word format to my father, who published it on the internet. It really was a web journal, or a web log, or a blog...in 1999! I still have the entire document for my trip. I've been considering replaying it, day by day in a modern blog, a task I really should have done this year, being exactly ten years later, but perhaps I will do it next year starting in June. Below is my entry for September 11, 1999.

Saturday was very restful. It took me three hours to do my laundry on Saturday. First of all, all the students are back, so the laundry room was full. I could only get one washer, and I had three loads, so I had to do them one at a time. Plus, I happened to be using the only washer that there is a reservation sheet for (probably why it was available), so I got a few lectures from Danish students about how they had that washer reserved, and that they had the right to take out my clothes, but there was always another washer available at each time, so they let me stay in that one. Another Dane taught me how to use the centrifuge (R2D2-looking) machines. You take your wet clothes and put them in this thing and they get whirled around for about five minutes, and then you put them in the drier. The secret is that the centrifuge machines are free to use, and afterwards, what would have taken you an hour to dry in the drier takes only twenty minutes! Tada! Pretty useful, huh?

That evening, I went into town to meet Lily at the designated meeting place (the Burger King on Stroget). It was going to be just her and me, but then she told me that a German friend of hers was coming. When I got there, I found a German girl and three Spanish people with Lily. A forth Spaniard came a few minutes later. Lily explained that she had just met these people on Friday at lunch and had invited them out too. They are all new in Copenhagen and studying or researching at DTU. The German girl, Nina, has been here for four months and is leaving soon. There was one Spanish girl, named Marga (short of â€œMargaritaâ€), one loco Spanish guy named Luis (very wild and crazy guy), and two other Spanish guys, one of whom is named Carlos (though I\'m not sure which one). We went to The Dubliner where we drank and danced for a little while. Then we were going to find a disco or café or something (I know those aren\'t related), but too many of us decided that it was time for bed, so we caught a night bus (it was already pretty late) home. I like the Spaniards okay. Luis could use some drugs to calm him down a bit, but the others were quite nice. Nina left The Dubliner early because she had to be somewhere early on Sunday, and afterwards, all the Spanish guys just couldn\'t stop talking about her and squeezed every bit of Nina info out of Lily. It was hilarious! It\'s like they\'ve never seen a blonde woman before! Unfortunately for them, Nina has a boyfriend... 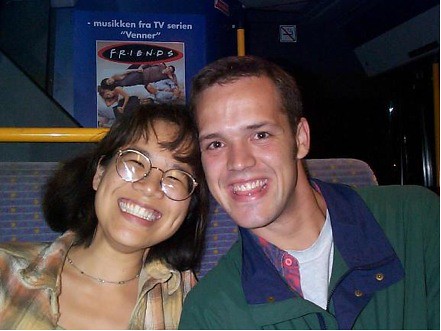 Hey, at least I caught her name, right?