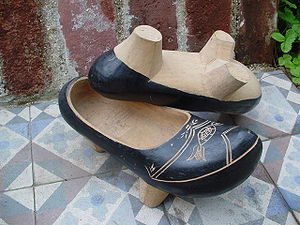 These wooden shoes, called albarcas de Cantabria in Spanish, date back to at least 1657, when King Felipe IV mentioned them in a letter to the Pope. They are overshoes, worn over your house slippers, to be kicked off at the door upon entering your house after a long day of work in the fields. Translated from this Spanish Wikipedia page:

The use of albarcas, very practical shoes in a region as humid and rainy as Cantabria, has been common in the towns by all social classes, since it's a very appropriate footwear for preserving the feet from the water and filth on the ground, and especially for performing countryside farm labor. The custom was to have two pairs, one for daily use in the fields, and another newer and more attractive pair for wearing during festivals.

During the seasons when work at home was less important, the albarca makers went up into the mountains to fell trees and prepare the wood for albarca construction. The usually went during the months of spring and autumn, when they finished the farm chores and collection of grass. The duration of their stay depended on various factors, but especially on the weather, like seasonal storms and snowfall. During their absence, it was the elderly, women, and children that continued to maintain the rural activity in the towns.

The albarca makers would usually go to the mountains in small groups and their stay could be one or two weeks or more. When they were gone for more than a week, the others went up to find them in a predetermined place, taking a donkey to transport clean clothes and food, and also to take back down the already-prepared pairs of albarcas stuffed into wicker baskets and sacks. The final touches to these albarcas were done at home with the frequent collaboration of the rest of the family.

All of the singers in the penultimate video of my Sauga Folk Festival report were wearing these clogs. Also during that weekend we saw this parade of Cantabrian bagpipers going through town.