by erikrasmussen, on Flickr")In August every year, my adopted town of Colindres, Spain, holds a Sauga Folk music festival celebrating local and international folk music. We have missed it the previous three years because it almost always coincides with our annual migration south to Extremadura. This year, however, I was lucky enough to be able to attend. 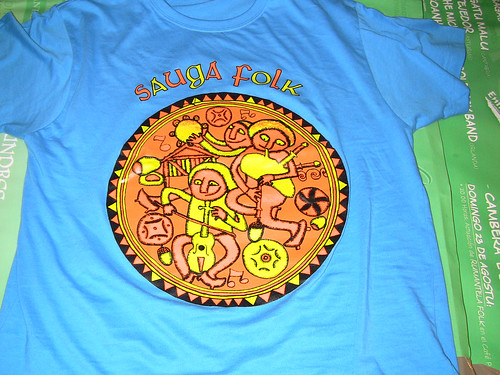 The official t-shirt for this year's festival.

Before I get to the high definition folk music video extravaganza that has used up all my cpu and bandwidth this week, I want to share a little bit that I learned about the local Cantabrian langage.

Until now I had only vaguely been aware of local dialects creeping into spoken Castillian Spanish. Most notable of late has been the question, "¿Es buenuca?", when referring to my infant daughter. The -uco or -uca suffix is a Cantabrian diminutive. They are asking if she's a good little girl or not.

There were a few crafts tables set up at the festival, and one table with a guy selling books about the history of Cantabria and the Cantabrian language. So I browsed and took a photographs. After the second photograph, he turned from the people he was talking to and said, "Hey, you owe me a euro for those photographs!" Only about 60% sure he was joking, I let out a nervous laugh and kept examining the books. I could pretty easily read the Cantabrian signs and book covers, and it seemed to me that it was very close to Spanish, but with a lot more u's. A moment later his other clients left and he turned to me to ask if I was curious about the Cantabrian language and where I was from. Normally people are at least a little surprised to hear that I'm from the US, just because there aren't many US expats in small town Spain, but he didn't seem to think it at all strange. He asked how long I'd been in Colindres (4 years), and if I'd noticed any usage of the Cantabrian language. A good friend of mine, who was dating a Brazilian girl at the time, once joked, "Speaking Portuguese is easy. All you have to do is speak Spanish, but mispronounce everything!" So I told this guy that I'd thought I'd heard some Cantabrian, but it sounded just like mispronounced Spanish. He was not amused. He said, "No language spoken anywhere in the world is mispronounced! Dialects may change from town to town or neighborhood to neighborhood, but they are all valid languages in their own right! Sheesh. I can see how that might be a touchy subject for a staunch defender of an endangered language. I apologized and agreed. That's when he handed me a piece of paper that read:

He was clearly very proud of this phrase and translated it for me. I'll include both the Spanish and English translations so you can see how similar Cantabrian is to Spanish.

No people loses their language by their own will.

"Languages are always killed off by violence and war," he added. I'm not entirely sure that I agree with this. While I know that dozens of languages across the globe go extinct each year (astounding, but the number is really that high), I think that a lot of it is through peaceful assimilation into ruling cultures. I suspect that there are many instances of parents who just don't make the effort to teach their native language to their children and instill in them a pride that will make them want to pass it on to the next generation. I tried meekly to voice some of my doubts about the veracity of his sweeping generalization, but he wasn't hearing it. He informed me that the Cantabrian language would not go extinct any time soon because there were good people like him helping to preserve it both in text and in teaching it. "Good," I said, shook his hand, and went back to the stage to see more music. 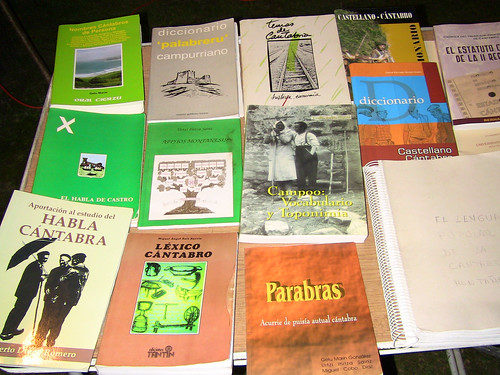 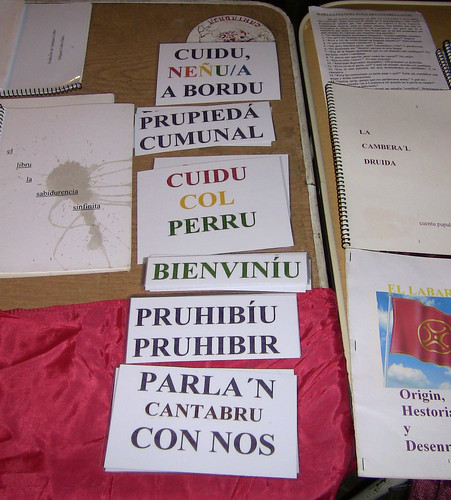 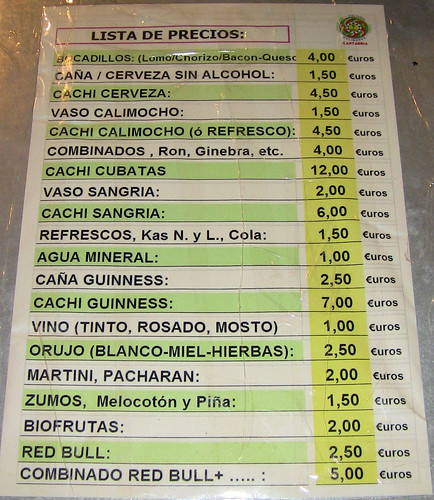 Even the beverage menu was in Cantabrian! I had no idea what a cachi was, but I ordered a cachi of cerveza. By complete coincidence, I had been browsing 2009 Oktoberfest beer price lists that day, and the beer at the Sauga Folk festival was considerably cheaper (and of undoubtedly inferior quality!). A cachi, by the way, is a huge (0.5L?) paper Pepsi cup full of beer. 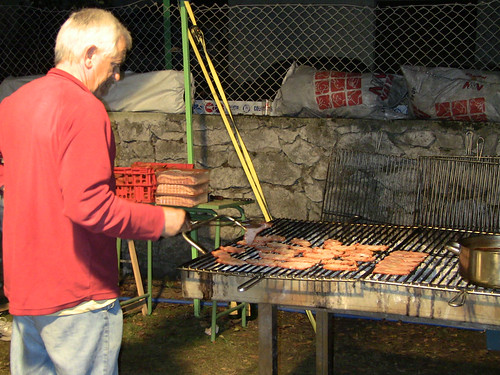 Grilling meat for the 4€ sandwiches.

The first group to perform was a local band called Gatu Malu (see? I told you Cantabrian was like Spanish but with too many u's!). They were awesome, but I didn't have my video camera with me. After their set, I ran back home to get my camera.

The second group is a sibling band from Asturias called Tejedor, sort of like an Iberian version of Nickel Creek. They rocked. Check out the tambourine spinning!

The next band had come all the way from Ireland to preform, The Michael McGoldrick Band. Great flute, guitar, and bagpipe. Check out the modern billow-powered bagpipe so you don't even have to blow to fill up the bag! Fancy schmancy! Good acoustic guitar strumming, too.

The first show the next night was a group of local Cantabrians performing typical local folk music, an a cappella men's chorus, a women's tambourine group, a gentleman playing a special Cantabrian flute called a chifla campurriana, and another gentleman playing a poor man's fiddle called a rabel, singing songs with adult humor. One line went something like, "A woman is not like a rabel; you play a rabel with your fingers on the outside...etc."

The final band was Liam O'Flynn and The Pipers Call Band, also flown in from Ireland. Great guitar, flute, bagpipes, and fiddle.

I had a great time at the Sauga Folk festival this year, and I\'m looking forward to next year!