Back in April, my friend sgazzetti sent me an invite to particpate in a new social networking site I'd never heard of, called Aardvark [vark.com]. I've been using it for several months now, and I must say that I'm very impressed and fascinated. Aardvark is a question-answering engine that uses its users to answer the questions of other users. It functions on several principles...

I choose to use Aardvark's instant messaging interface, via XMPP to my Google Talk account, but it will work perfectly well through the website or via email. Currently I am listed as an expert on the following subjects: Apple Mail, artificial intelligence, Cantabria, CSS, expat, Flickr, HTML, iPhoto, java programming, javascript, Mac OS X, poop (thanks, sgazzetti!), Spain, Spanish, timelapse photography, and web design.

Whenever any Aardvark user asks a question that Aardvark's sophisticated natural language parser determines to be about something I'm an expert in, I get an instant message, first asking me if I want to answer a question on topic X, and then the question if I confirm that I do. To which I can provide an answer, say "pass" to skip, refer the question to one of my contacts, or say "mute" to make Aardvark stop asking me about that topic. I say "pass" to about 80% of the questions, but they are very often interesting. You can also help out their language parser by tagging the questions with what they are really about. If I get a question asking about any good B&B's in Malaga, just because I know about Spain, I can add the tag "Malaga" to it, to better help Aardvark track down a knowledgeable person. So far I have only referred one question, but that's because my only Aardvark contact is sgazzetti, and our areas of expertise don't overlap much.

If my explanation hasn't helped much, perhaps the 20 second demo video on their homepage will.

One thing that Aardvark has done really well is allowing you to fine tune how intrusive you want it to be. You can set the days of the week and times of day when it can contact you, and whether it should only contact you by instant message or if it can contact you by email. If you are waffling on whether or not to join, getting spammed to death should not be a concern. Personally, I enjoy the questions, and I have it set pretty much wide open. As a result, I get about six questions a day.

Twice I have contacted the folks at Aardvark, once to suggest a feature, and once to ask to participate in a trial for an iPhone app, and both times a human has responded to me in a matter of minutes. And they have only sent me one unsolicited email, to invite me to be an "Aardvocate", which is some kind of beta-testing superuser to reward all my participation. If you're jealous, you should be.

Almost all of the questions are serious. But since I'm such a smart-ass, when I joined, and all I knew was that it was a service for answering questions, I gave it "Is there a god?", to which I received the serious and thoughtful answer, "I think so, but apparently I'm hardly representative of everyone."

But a couple weeks ago, I got this one. This screenshot is also a good example of how Aardvark contacts you, and if you don't respond within a few minutes, apologizes and leaves you alone unless you request the question. 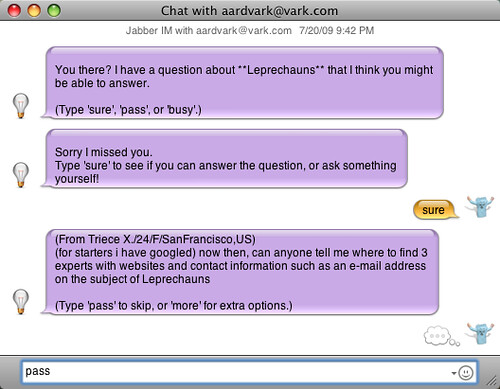 Later I was informed that the question had been withdrawn.

So far, all the questions I've asked Aardvark have been along the lines of "Is there any way to do X with software Y?" Those questions have only elicited "I want to do that too, but I don't think it's possible. Let me know if you figure out how!?" responses. But there was once when I couldn't easily find an answer on Google. I was trying to figure out how to name a "to be subtracted" variable in a computer program, and couldn't remember the proper word for "the thing being subtracted" in arithmetic. My question:

In arithmetic, the word for "number to be multiplied by" is "multiplicand". For division, it's "divisor". What are the equivalent terms for addition and subtraction?

The answer I received was very thorough:

I think this is what you are looking for: addend + addend = sum, subtrahend - minuend = difference, muliplicand x multiplier = product, dividend í· divisor = quotient.

Perfect! I later ended up not using the word minuend in my program, but still cool.

Want to try it?

I think Aardvark is currently still on the invite-only system to reduce an user numbers. If you would like to give Aardvark a try as my contact, click here.