Lying in bed last night, I was attacked by an earworm. From out of no where, my brain started singing Mambo #5.

I'm pretty ambivalent about that song. The catchy rhythm and goofiness of the lyrics balance each other out. But it did get me thinking back to exactly ten years ago, when that song got etched into my brain.

It was summer in Scandinavia as the second millennium was coming to a close... From June to December of 1999, I spent six months in Copenhagen, Denmark with an engineering exchange program called IAESTE. They had arranged for me to live in a dormitory with Danish college students at the Denmark Technical University. Every morning before going to work at my internship in the center of Copenhagen, I would eat my cereal in the communal kitchen, watching the communal television. It got about six or seven channels, as I recall, but the only one I ever watched was the only one that was guaranteed to be in English: MTV Europe. 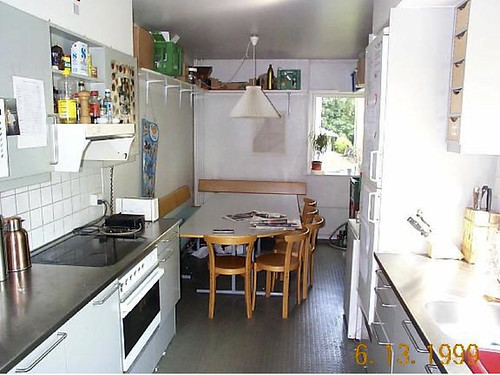 The communal kitchen at Block 8 of Paul BergsÃ¸e Kollegiet, the dorm community. 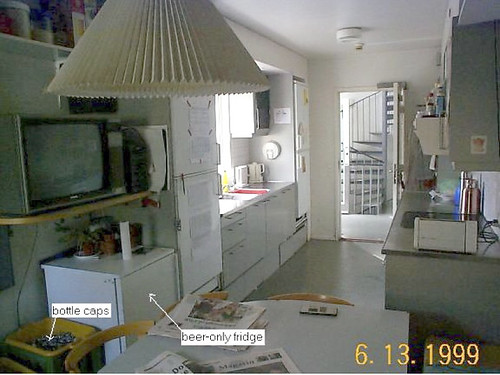 Unlike American MTV of the late nineties, MTV Europe actually played music videos! Imagine that. There were five music videos that I recall being played ad nauseum that year. Two of them were by two previously unknown young ladies by the names of Christina Aguilera and Britney Spears.

That Don't Impress Me Much - Shania Twain

I really despised the lyrics of this song. As a virile twenty-year-old looking for women, the idea of this attractive woman snubbing a Brad Pitt rocket scientist with a fast car annoyed the crap out of me.

Genie In A Bottle - Christina Aguilera

This is a great pop song. Great rhythm, great voice, silly lyrics, sexy video. Every time I remember seeing Christina Aguilera that first year of her fame, I never once recall her navel being covered.

Everything I just said about Christina? Ditto for Britney.

This one you may not have heard of. Lene Marlin is a Norwegian singer songwriter. Like Britney and Christina, she was eighteen years old at the time. I like her considerably more than Britney or Christina, too. Writing your own songs carries a lot of weight if you're trying to gain my respect as a musician, (This is why I like The Beatles more than Elvis.), and I'm a sucker for strummed acoustic guitar, especially if it's being strummed by a pretty girl.

Of all these artists, Lene Marlin's is the only album I purchased.