According to the laws of my native country, the United States of America, I will never be eligible for dual citizenship. If I apply for Spanish citizenship, I will automatically lose my US citizenship. This is not true, however, of my daughter. She has Spanish citizenship by birth, and can apply for US citizenship as the child of a US citizen. Because she did not actively request her non-US-citizenship, but acquired it automatically, she is allowed to hold both Spanish and US citizenships. While I do not know exactly what legal ramifications this will have on her banking or taxes, I think that in the long run many more things in her life will be facilitated by having dual citizenship than hindered by it. So, on June 1, 2009, we visited the US Embassy in Madrid and registered her to be a US citizen. A funny thing occurred when her passport arrived in the mail. She and her mother were out for a walk, and the doorbell rang. I answered it and the guy said he had a package from the US Embassy in Madrid. I immediately knew what that was and buzzed him up. When he got to the door, he informed me that I had to pay 10.15€ in C.O.D. shipping charges. I said, "One moment," and went to get my wallet. It was then that I realized that I didn't have any money. You know how some days you run out of cash in your wallet and forget to go to the bank to fill it back up? That's what happened to me that day. I managed to scrape together six 1€ coins, and then found two more in a drawer. I told the guy, "Look, man, I've got 8€ here. Hold on a minute and I'll go look upstairs. There's sure to be a couple coins lying around up there." He said, "Nevermind, I'll pay the other 2.15€, just sign here and give me the 8€" Whew! I mean, jeez, it's not like you should be required to have money on hand when you're home alone! Anyway, we finally got Nora's passport.

Nora's official national ID card for Spain. The woman who processed our application was a little concerned because she wasn't looking directly at the camera in the photo. C'mon! The same woman never once looked to see that the baby we were carrying was the same as the one in the picture. Photo IDs for infants are such a ridiculous idea anyway since all babies look more or less alike. And it's valid for five years. What a joke!

This document came in very handy on our flight to Madrid. In theory she didn't really need any documentation, but the airline staff were very happy that she had some.

Nora's US passport. We used a photo that I took on her two-month birthday. In case you were wondering, the US Dept. of State does not mind you using a fairly heavily photoshopped photograph for your passport. I removed a lot of shadow from the background.

This document is almost more important than her passport. It's the paper that gives her official US citizenship and serves as her birth certificate for any transactions in the United States. "Official" Spanish birth certificates consist of a photocopied handwritten page of an official registry book. We Americans prefer more fancy borders and seals.

In theory her US Social Security card will be mailed to us sometime the the next few months. 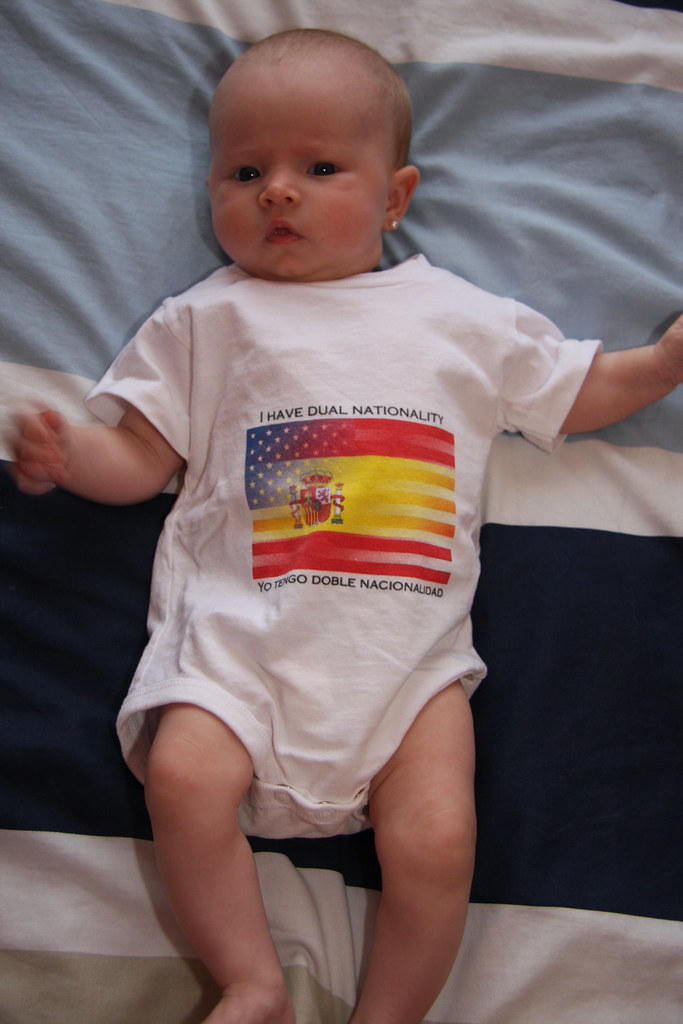 This is an infant bodysuit that I designed for her. Order yours today! It's still a little too big for her, but I made her wear it for this blog post. 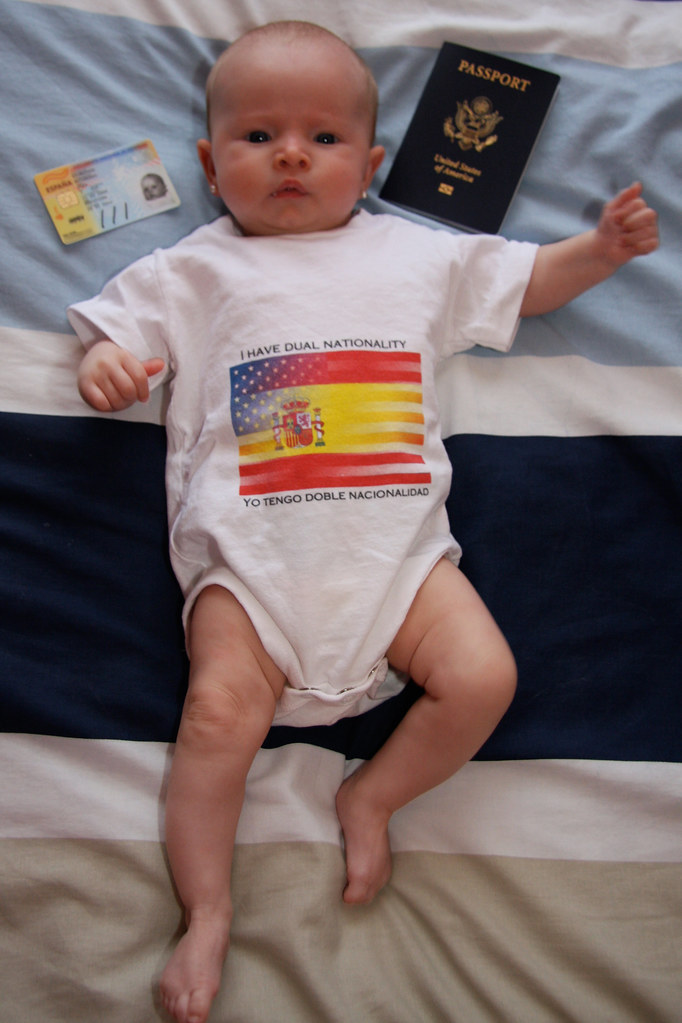 Posing with her Spanish ID card and US passport. 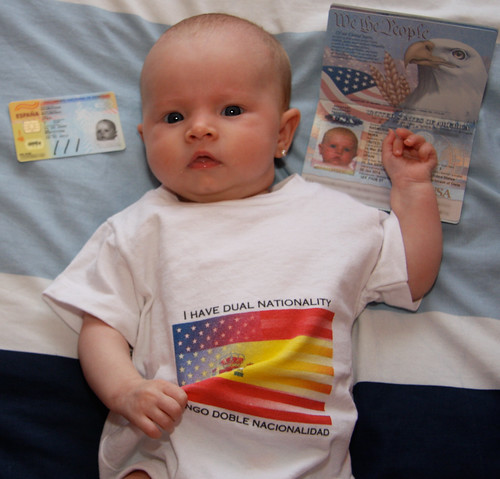 You want ID? Oh, I got ID! You want the one with the birdie or the tilde?

The observant among you may have noticed an interesting detail about Nora's surname(s). You see, in Spain, everyone has two surnames. We originally filled out all the paperwork for her US passport using both surnames. But when we got to the embassy, the woman there strongly suggested that we put a hyphen between them, otherwise the Americans would get confused. And don't we know it! Both Marga and I have had much, much hassle in foreign countries because they don't understand the surname customs of our own countries. So, in the spur of the moment, fueled by a strong distaste for hyphenated surnames, we decided that, in the US, Nora will only have one surname, and in Spain she will have two. The embassy woman told us that this decision was highly unusual, but Marga and I both agree that it's for the best. Our experience tells us that the difference of name in both countries will actually make things easier rather than harder.