On Sunday, May 17, my parents, inlaws, wife, daughter, and I made a quick stop by Guernica on the way back home to see a bit of the town and its famous oak tree. My father had recently read a historical novel about the town, titled Guernica

, and wanted to see it for himself. It was a beautiful day and we all enjoyed walking around the park and museum/legislative building where the tree stands.

Picasso's painting, Guernica (on a tiled wall in town) deftly captures the horrors of war. It's really difficult to look at. In the foreground is my father doing his best to fit in with the painting. 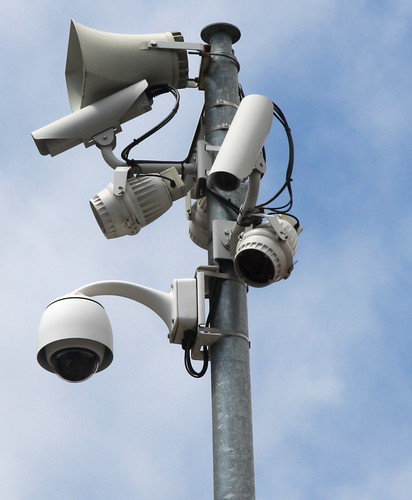 I knew we were getting close to the tree when I saw this "Security Tree". 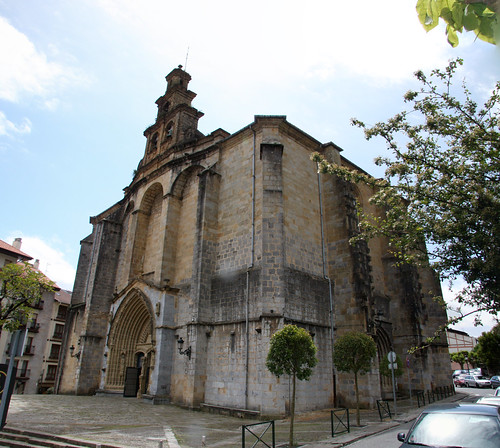 A stitched wide-angle panorama of the church in Guernica.

This is the result of 23 10-megapixel JPEGs stitched together into one huge panorama. Worth viewing slightly larger. Or full size if you've got what it takes. 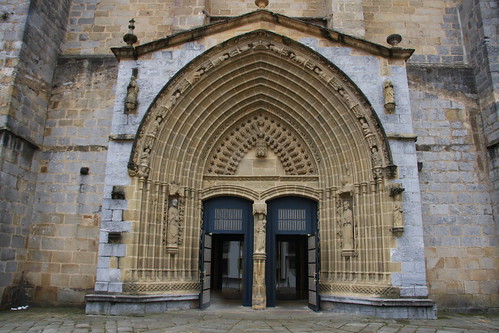 The church door. The dozen figurines (apostles) along the top seem to get less and less human as they reach the top of the gothic arch.

This is not yet The Tree, but it sure was a beautiful tree, and it was no doubt around during the 1937 bombing. That's my father standing at the base. 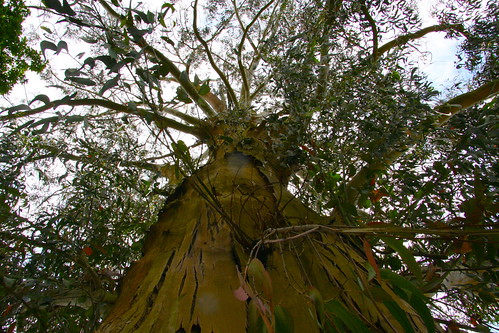 Looking up from where my father was standing. 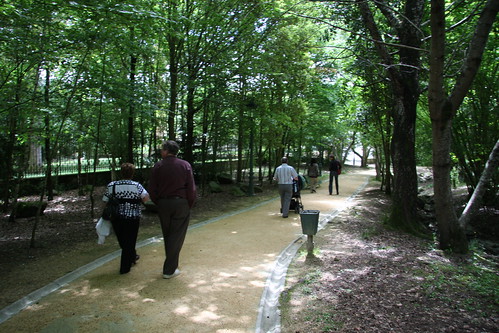 I adore walking down wooded paths like this. Marga and Betsy are in the front, followed by Juan and Nora, and Marce and Paul bring up the rear. 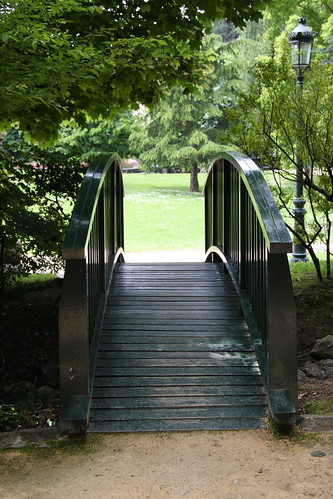 Park bridge takes you to a grassy place. 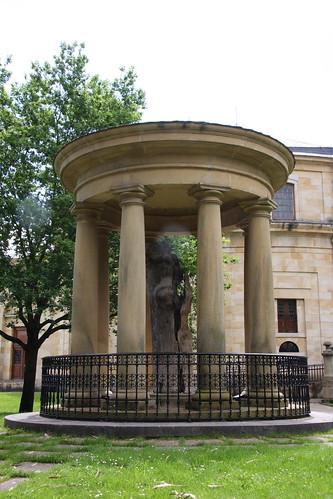 There she is! The remains of the original tree. 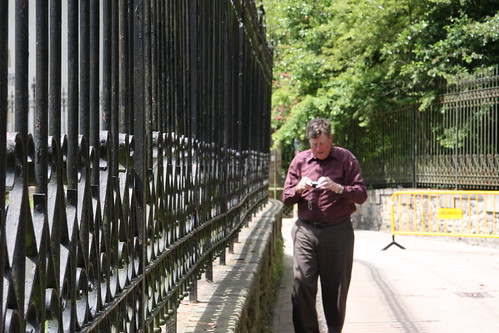 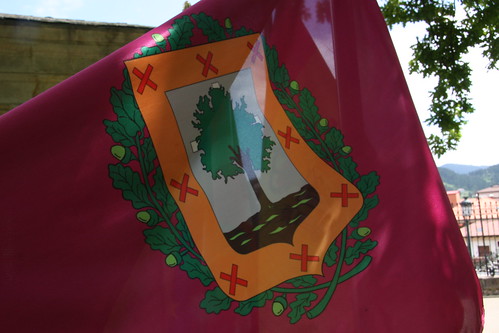 The Guernica flag contains – you guessed it! – a tree. 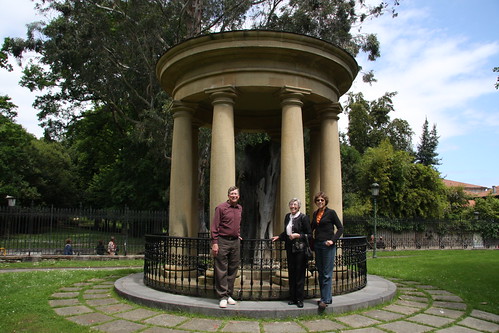 My father, grandmother, and mother pose by the original Tree of Guernica. 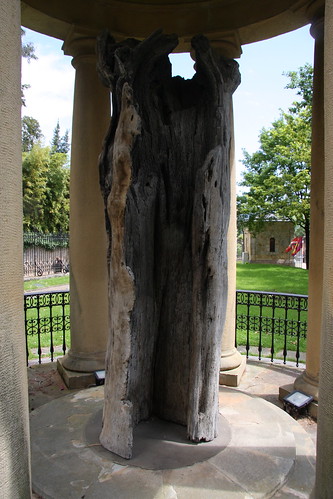 It's a little dead now.

The Guernica Assembly Hall, where the legislators still meet to...um...legislate, was beautifully decorated. Worth seeing a little larger. 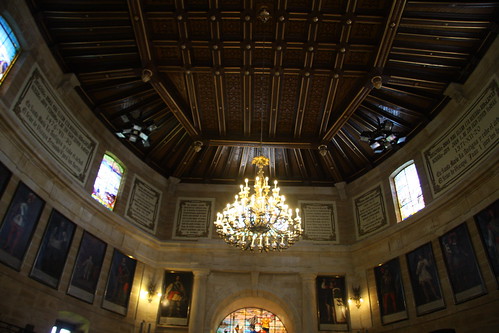 In case the shape of the place wasn't clear from that panorama. The chandelier was gorgeous. 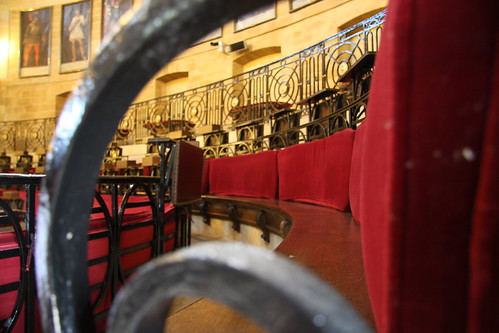 There all the legislative butts sit. 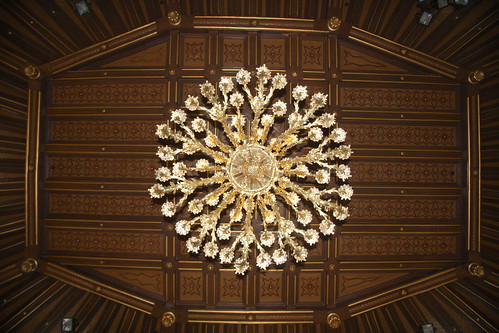 In a flash (ha!) of photographic brilliance, I positioned myself beneath the chandelier and shot upwards. Worth seeing larger. 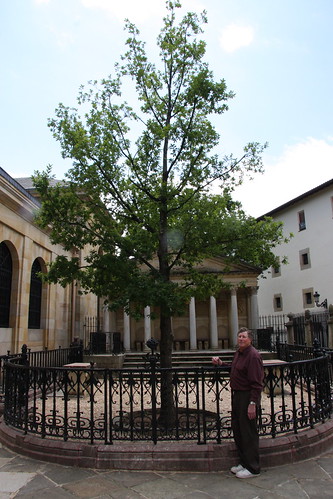 Aha! The living Tree of Guernica! It is the grandchild of the original tree. Basque political leaders are still sworn in under this tree. 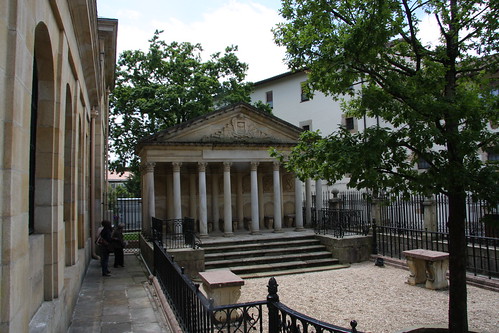 A very Parthenonic courtyard behind the tree.

It was about this time that my father grabbed me and said, "Hey, come in here! You gotta see this!" I was already content and in awe of all the architecture and natural beauty of the place, but I was not prepared for the room I was about to enter. The ceiling was covered with gorgeous stained glass that radiated the suns warmth through its dazzling array of colors. 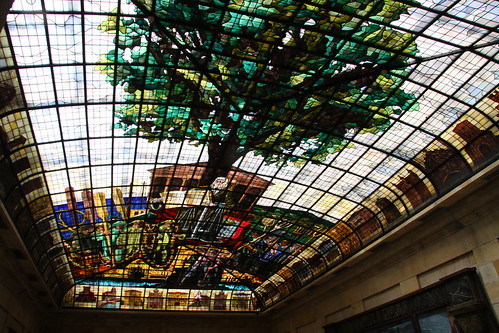 It was difficult to capture in one shot. It depicts a huge tree and the miners, farmers, and fishermen of the Basque Country coming to meet underneath it. Definitely worth seeing large. 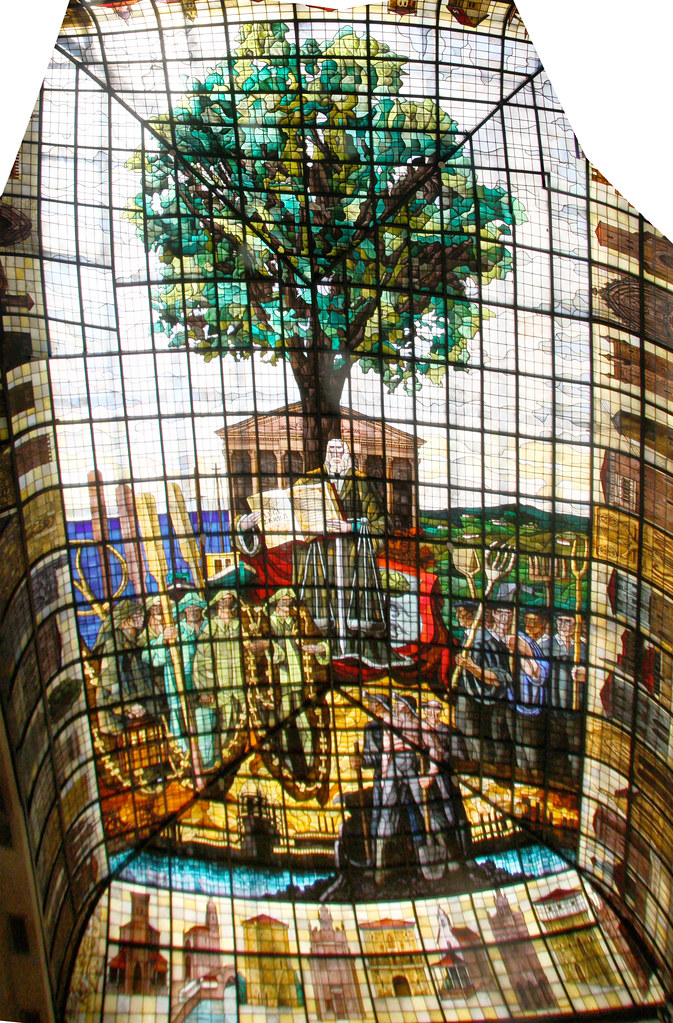 As sort of an experiment, I took a dozen photos of each part of the stained glass, stitched them together in Photoshop, and then tried my first "perspective correction". All the shots were shot at the angle of the previous photo. I'm fairly happy with the perspective correction I achieved as a first attempt.

Around the edge were little vignettes of each town hall in Viscaya, the autonomous region (like a county) of the Basque Country where Guernica is located. 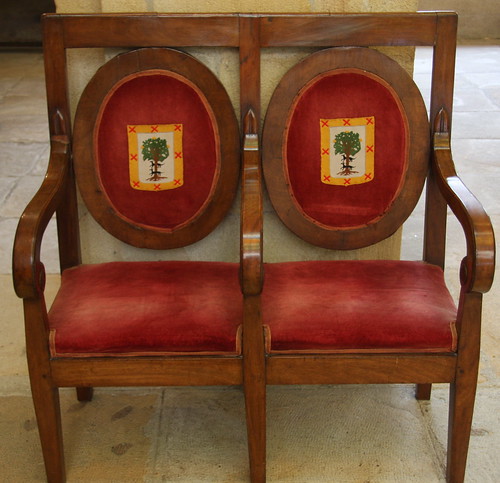 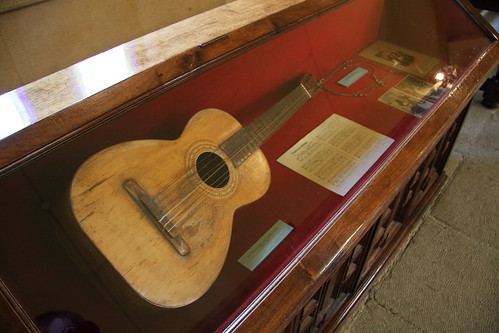 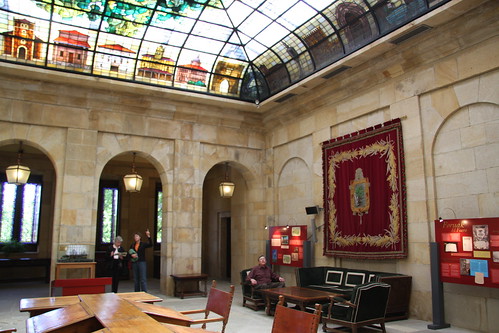 This photo of my mother, grandmother, and father gives a sense of the size of this room. 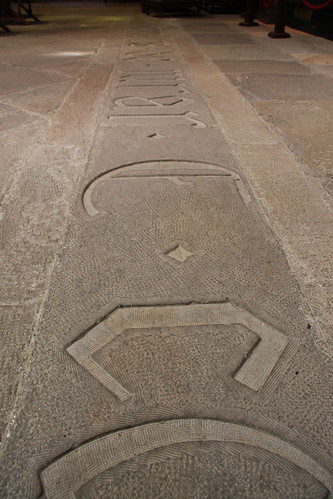 Where's Robert Langdon when you need him? 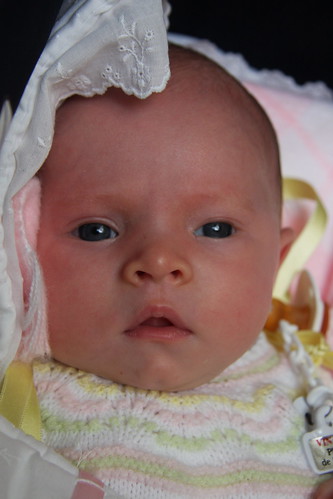 During some down time in the touristing, my mother was commenting about how perfect and beautiful Nora is (you'd think that'd get old, but it doesn't) and asked me to take this photo. 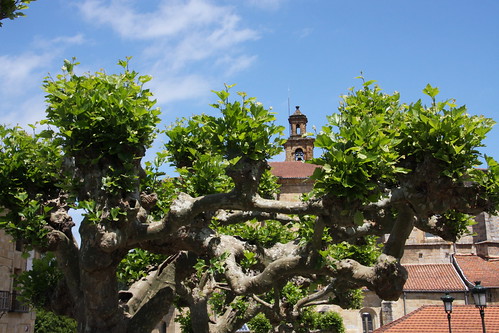 Back outside in the sunshine. 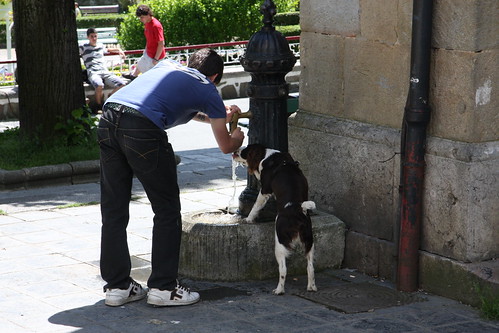 An English Springer Spaniel drinks from a public fountain. 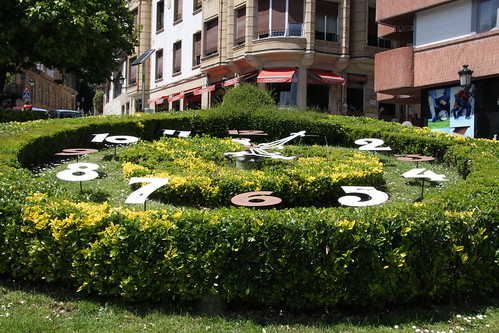 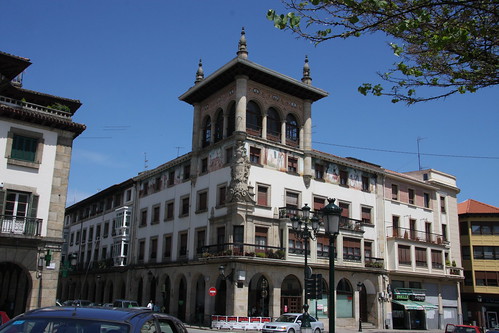 The facade of this building caught my eye.

After a quick drink in a bar, we headed back to Colindres for a late lunch. I was very pleased to have seen Guernica, and I can't wait to read the book