Nora, two of your feeding sessions yesterday lasted over two hours long. Suck a little, doze a little, suck a little, doze a little, etc. We know that a little resting between gulps is normal, but you never seem satiated. Plus, you go from "OMG, feed me, feed me, FEED ME!" to completely asleep after one swallow. It's like your brain is content that, if there's a nipple in your mouth, the problem is solved, even if you're not full yet. Eventually your mother gets bored and gives you food from a syringe (up to ten of them so far!) until you stop moving your head to grab the syringe. Then you sleep for two hours and ask to repeat the process. Last night, when your mother went to bed, she looked more tired than I have seen her in a long time. She told me, "Look, when she is hungry in two hours, just go ahead and give her the bottle if you want." The local midwife and doctors have been very discouraging of the bottle because they are so religiously pro-breast. But your mother just can't spend her days with you dozing semi-contentedly at her breast.

Sure enough, two hours went by. I finished up some work and even got in an episode of House, but then it was time. As I was warming the milk, your mother couldn't help but get up and come downstairs. The first couple times we put the bottle nipple in your mouth, you got confused and started wailing, but around the fifth time, you tried sucking it, and then all three of us had an epiphany. You wrapped your little lips around that rubber nipple like around no nipple you've ever seen. Gulp, gulp, gulp! You drank 16 syringes worth of milk, that would have taken us an hour to give you, in about 3 minutes of gulping. You immediately passed out and left your parents agape at their discovery.

We all slept 2.5 straight hours until you decided it was time for more food. This time I was still a little asleep and the bottle wasn't completely closed when I gave it to you, and we got milk all over your pajamas and the floor of the kitchen. You were not pleased, idiom about spilt milk or not. When we finally got back to eating, I was a little gung-ho from the previous feeding, and let you suck and suck and suck until the bottle was empty. Your face and stomach began churning. Five minutes later, as I was changing your diaper, a large portion of the milk came back up in your first ever vomit. I need to learn some patience and moderation in the bottle feeding, apparently.

Between 3:00 and 4:00 this morning, you went through four diapers, two onesies, and three pajamas. Yesterday two of your three diaper changes involved the soiling of a fresh diaper before it was even completely on. If you could let us know, "Don't change me, I'm not done yet," that'd be helpful.

In conclusion, I suspect that we will throw in the moist towelette with breast feeding and just give you breast milk from a bottle. You still get all the benefits of your mother's milk, and your mother gets some level of sanity. It's a win-win.

A quick video and photo to finish up. I took this video yesterday while your mother was feeding you with a syringe. You're awfully adorable when you eat. Your mother was still trying to work some Skinnerian behavior modification on you that the midwife taught us, to only give you milk when you opened your mouth wide, the main thing you don't do properly when breast feeding. And we usually use adorable little bibs for this stuff, some of which have your name embroidered on them, but I think Mommy was too tired to fetch one. 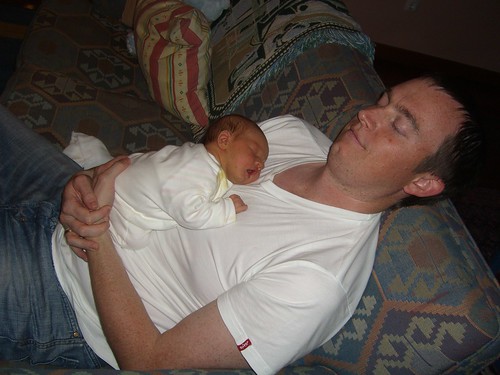 This photo was on the camera that does video from a week ago, when you were three days old.