Wow, what a day March 24, 2009 turned out to be. Marga started having contractions at 23:45 the night before and suffered for three and a half hours at home before letting me take her to the hospital. During that time, she took her midwife's advice to take a shower and do her best to relax. I spent those three and a half hours pacing around wildly, writing the previous blog post, and making sure our bag was fully packed for the trip to the hospital. At 3:30 we left home, and I said, importantly, "We leave as two...", setting up the obvious ending that I said earlier today when we arrived home as a family of three. 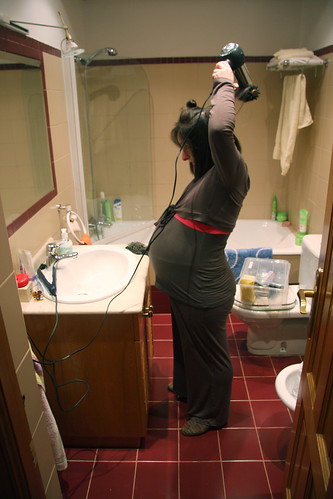 Marga doing her hair between painful contractions. Our local midwife specifically suggested grooming as an activity during this time to take your mind off things to come and because it would be a while before you felt really clean again. 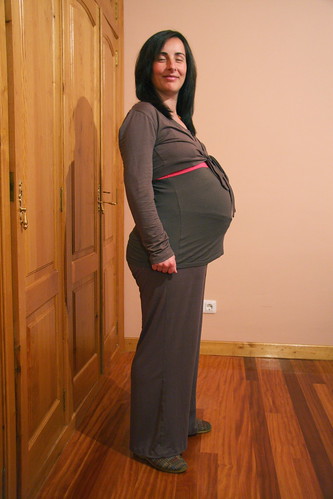 Final belly shot just before leaving for the hospital.

By 3:45 we were at the hospital, arriving 5 minutes before another pregnant woman. The nurses ignored my suggestion to race the wheelchairs down the hall as if there was a checkered flag at the end. But the driver of the other woman's chair made the classic mistake of entering the elevator first, we pulled in behind, and our nurse driver winked and whispered to me, "Ha! Now we get to exit the elevator first!" Upon arrival to the maternity ward, they made me sit outside with the other soon-to-be father for a bit and we made small talk. 18 hours later, I saw him in the lobby and he informed me his kid was born at 8:00 in the morning, so they ended up with the checkered flag after all. Perhaps if we hadn't made that 8 hour pit stop... 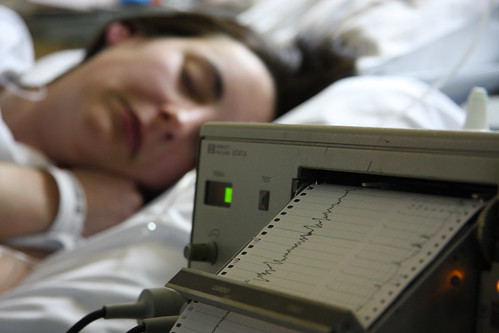 This was my view for eight hours.

The contractions got worse and worse and more painful, until finally the anesthesiologist gave her the epidural, and then everything was alllllll good. The problem is that without the pain and the control, it was a waiting game. The midwife would come in every so often, look at the printout from the monitor and check dilation, which was steadily increasing. Marga was rather spaced out and just sitting there peacefully, but I was experiencing something I can best describe as "intense boredom", where I was doing my best to will some new information into existence.

Eventually, after Marga's parents, sister, grandfather, two aunts and one uncle had arrived, the midwife, who seemed very good at her job and very soft spoken, but not a very good communicator of information, came in to wheel Marga off to the paritorio, the birthing room. I was told to stay put. A nurse came to give me my cap and gown and slippers, but I was told to remain there. At one point the anesthesiologist walked by and told me, "This is your first child, isn't it? I can tell because you look like you're about to explode with nervous energy." I stepped out to inform Marga's family that "OH MY GOD! IT'S HAPPENING!!!" and then back in to my waiting room to take some deep breaths. 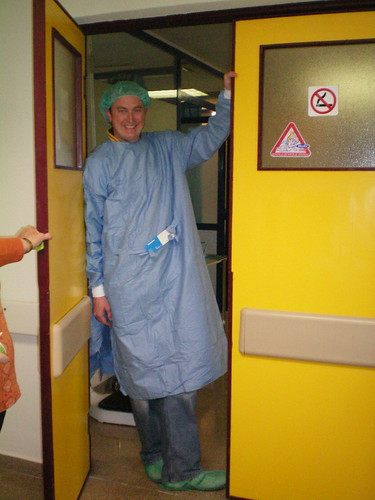 I can't recall being this nervous before.

I swear I heard some screams and couldn't help but wander down the hall near the paritorio door, but a nurse caught me and told me I couldn't be in the hallway. Eventually someone came in to lead me to the paritorio, informing me on the way that the birth was a success, but that, for slight complications, I had not been invited in for the actual event.

The nurse deftly maneuvered me through a complex well-traveled paternal path around some equipment to keep me way from the bloody slaughterhouse scene at the foot of the "bed" Marga was on. And there, lying on Marga's chest, was the most precious thing I've ever seen. I had prepared myself for an absolutely hideous creature, and I was more than pleasantly surprised. Then things got kind of blurry from all the tears and emotions.

They stitched Marga up, and were intentionally vague when Marga asked just how many stitches she was getting. Nora had been pulled out with a big suction cup that left a purple bruise on the top of her head, and, as I understand it, they had to cut Marga a bit to let some air into the womb, because Nora was getting sucked back in (actually pushed from atmospheric pressure) every time Marga stopped pushing. They put a little hat over Nora's only slightly deformed head to cover a big scabby splotch of dried blood (her mother's). Eventually Nora was handed to me for the first time and they wheeled Marga into an adjacent recovery room to give little Nora her first go at learning what a nipple is. I went outside to tell the family that things went well. They were very excited and frustrated that Marga didn't want them in the room bothering her and Nora yet. Nora's Aunt Belén, in her excitement, took about 75 photos and videos of the door that they couldn't go through. Eventually Marga covered up her breast and we let the family in to goo and gaa over the newborn. 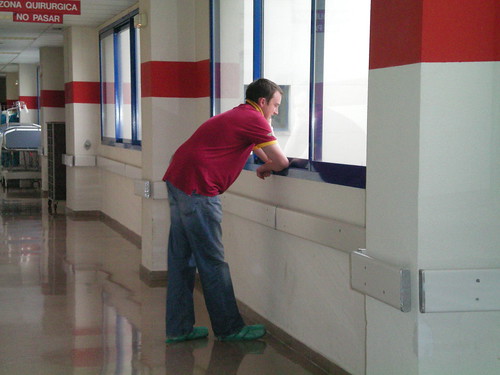 I called my parents before Marga's parents had even seen Nora. 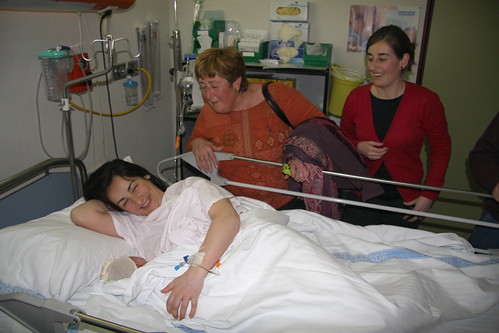 Everyone agreed that Nora was the most beautiful creature, human or otherwise, that had ever existed in the history of the universe.

It took much effort to pry people away from the newborn, but eventually we went out to lunch to a restaurant across the street. When we returned, Marga and Nora had been moved to the room that would be our home for the next two days. 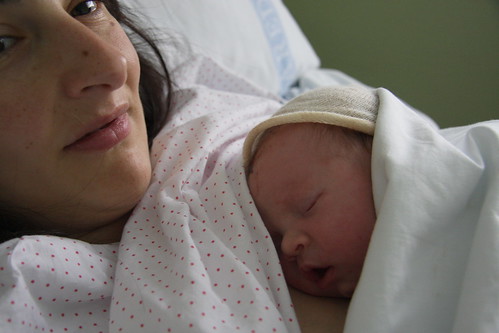 Mother and daughter, both exhausted. 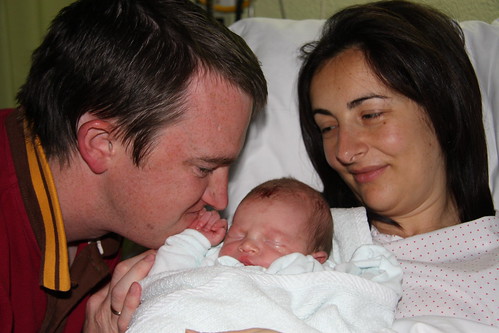 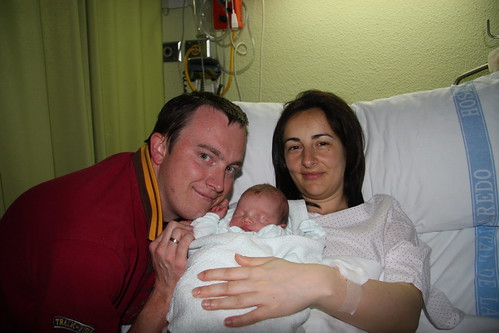 Nora, you were totally worth the wait!