My 20" Apple Cinema display that I bought on December 12, 2003, when I bought my G5 for the price of a small automobile, finally died. Well, it didn't actually die. I think the point of failure was the adapter from my MacBook Pro's DVI output to the oldskool proprietary ADC connector. I suspect that the Cinema Display will still work just fine with the G5 it was purchased with. The problem is that I don't have the desk space to plug it in nor the need to have that computer running with a display. So for now the old monitor is going into storage. That was the sad news. Here comes the good news... I bought a THIRTY INCH1 monitor! It's WONDERFUL!

The difference in monitor sizes is really incredible.

All the monitor resolutions these days are a 16:10 ratio, which is an approximation of the Golden Ratio, a mystical mathematical value that happens to correspond with our sense of what makes a rectangle attractive. I have to wonder if, sometime in the future, monitors will come to an even closer approximation of Î¦. 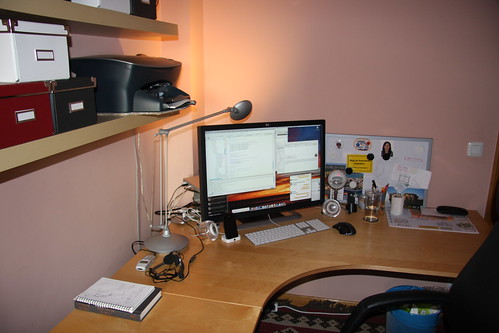 At first, I thought I might be able to get away with hiding my MacBook behind the enormous jumbotron (you can see it hiding back there), but then I realized that I'm going to need the MacBook's built-in iSight camera for video conferencing with my daughter to her grandparents, so I've since brought it back out. Plus, there were applications like my Twitter client and iChat that really work best on a side monitor to be looked at occasionally. I've also moved my printer up onto my new shelves to make some desk space for my infant child when she decides to arrive. Surely Griffin makes some kind of USB dock for babies, right?

I've only had it for a couple days, and it's already starting to feel completely normal. Oh, and movies look fantastic on it!

. It doesn't have the best specs of the 30 inchers out there, but the price, especially the price available in Expensive Electronics Land (aka. Europe) was considerably more reasonable. The HP was the only 30 incher under 1K€, and I found one for under 900€.