Last night for dinner, I had respigos. One of our Thursday night salsa dancing friends has a farm, and another has a restaurant. These respigos were taken straight from the farm to the restaurant and prepared for us last night. Do we know how to pick friends or what?

When I asked what they were, I was told that they were the leaves of the nabo. I'd heard the word nabo before, and knew from context that it was some kind of vegetable from the garden, but I'd never heard it used in direct relation with an object that I could identify. iPhone Spanish-English dictionary to the rescue: nabos are turnips! Actually, most usages of turnip in English are metaphorical as well (truck, blood, etc.). So this morning, I head to Google and search for respigo and find confirmation of what I was told the night before, that that word is very specific to this region of Spain. In general I've found that terms related to specific items on farms vary widely from region to region. Searching for "respigo turnip" gives only one hit: an English tourism gastronomy guide to the local town of Laredo where I ate the respigos last night. The Royal Acadamy of Spanish, the official body that defines what words form part of the Spanish language, says that it's a rural Cantabrian word for the seeds (not leaves) of the berza. So what's a berza? I find that the best way to translate words that are part of biology taxonomy is to look up the Spanish word on es.wikipedia.org and click over to the English article on en.wikipedia.org. And what does that take me to but the article about Collard Greens.

Collard greens, as wikipedia so nicely lays out, are an important part of Southern American cuisine. Having never made them myself, I always assumed they were mostly spinach, but I see now that turnip leaves are often used. To be honest, when I ate the respigos last night, all I could think of was "sort of like spinach", but now that I've made the collard greens connection, it's obvious. Although collard greens are often served with a lot of vinegar, and the respigos had none. Someone around the table mentioned that, where they're from, turnip leaves are eaten with pancakes made from corn meal. Duh, corn bread and collard greens! 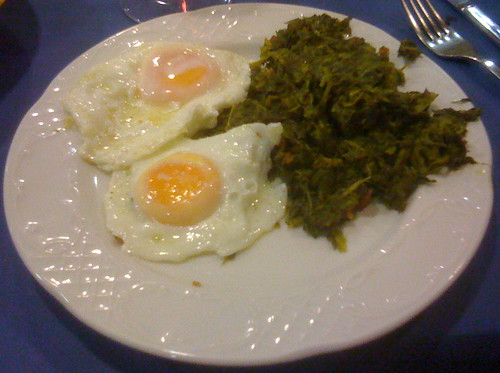 Boy howdy, they sure was good!

Southerners, feel free to mock my ignorance in the comments. You know you want to.