I didn't die in a fiery plane crash yesterday

My two-hour flight from Frankfurt to Bilbao was utterly uneventful. At least until we started our final descent. We flew out over St. Jean de Luz, out over the Bay of Biscay, and almost within view of my house. With slats extended, gears down, the plane started the worst stomach-churning wobbling I've ever experienced. We were blown on all axes, pitch, roll, and most terrifying of all, yaw! When we got down to about 200 feet, it became clear that landing was no longer an option, and the pilot put us to full throttle and got us the heck out of there. Then we went around again. The second time, he aborted even earlier.

I cannot recall the last time I was so concerned for my life. My brain churned up thoughts of my pregnant wife and the idea of my daughter growing up without a father. Then I actually thought, "I'm really disappointed with my final round of golf. If it's the last round I ever play, that would be a sad way to leave the game." In retrospect, that's a rather stupid thought, but I admit to having it. To be fair, I had spent the week playing golf and had even played the day I started the trip. 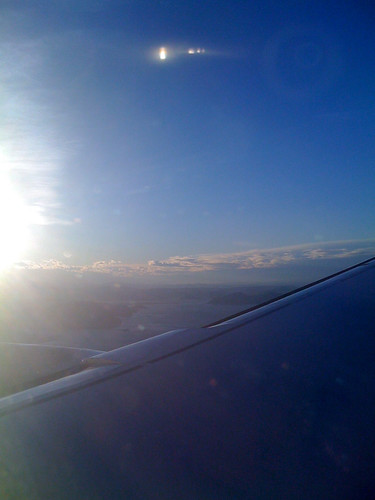 Looking down the coast towards home during the first approach.

When the pilot finally came on the intercom, he frustratingly explained everything in German first and then in English. We were being diverted to Barcelona because all the airports near Bilbao were closed because of the high winds. I suspect that this decision was made by some coffee-sipping German in the Lufthansa head office in Frankfurt who probably was not very informed about Spanish geography. Barcelona is 6 hours away from Bilbao by car and Madrid is 4 hours away. We disembarked (I abhor the American word "deplane") in Barcelona and were given a small sandwich and a miniature 150 mL soda can for our troubles. We were given the option to spend a night in a Barcelona hotel and then maybe find a flight to Bilbao the following day if they were allowing landings at all. I had an ultrasound appointment to get to on Tuesday morning, so I opted for the bus. Although it's only a six hour journey, there is some Spanish law that forces bus drivers to rest one hour for every three that they drive, thus making it an eight hour journey. When we left at 8:30 PM, I called Marga with the last remaining milliwatt of power in my iPhone battery and she promised that someone, probably her father, would come get me from the Bilbao airport at 4:30 the next morning. And so began another eight hour stint in seats too close together to allow me to sit in them properly. Luckily there were two buses and enough people had chosen the hotel option so that I had two seats to myself. When the passengers finally stopped reliving their horror from the aborted landings to every number in their mobiles, things finally calmed down and most of us caught at least a couple hours of uncomfortable sleep.

At 4:00 we got to the Bilbao bus station, where they had taken us first due to the fact that the airport was closed and there would be no taxis there. Another couple and I requested a ride to the airport because we had already arranged for pickup there, and we arrived exactly at 4:30. They were picked up immediately and I had to wait until 5:15. Apparently, in the wee hours my father-in-law had made a wrong turn somewhere. When I finally got home at 6:00 AM, I was tired and cranky. With Marga's warm embrace, it finally sunk in that my journey was over. Never has a hug been so welcome.

After only three hours of sleep, it was time to head to the hospital. The ultrasound appointment went well, although no pictures were acquired. Nora weighs 2.2 kg and is properly positioned for her journey into this cold bright world. The doctor had trouble getting some readings from the umbilical cord because Nora would playfully bat away the ultrasound sensor wherever it was placed. I think she's very territorial.

On the news today there was video of a plane landing in Bilbao yesterday that looks like about the most out-of-control landing ever that did not result in a fireball. The pilot that landed that plane was an absolute idiot and I hope he is fired for being so reckless. I'm very happy my pilot was so cautious, even though it cost me another 12 hours of travel time. I left the golf course in Myrtle Beach at 1:30 PM on Sunday and arrived home at 6:00 AM on Tuesday morning...but I survived.

UPDATE! Here is the video from the news of the other plane landing. Yikes!