Last weekend, my in-laws came over and Marga and her mother made rosquillas for the first time. Like churros, another Spanish delicacy, rosquillas are basically just fried dough, except this dough contains a little white wine and anisette for flavor. Mmmm....anisette... I didn't pay attention to the recipe they used, but I found one here that looks pretty similar to what I do remember. 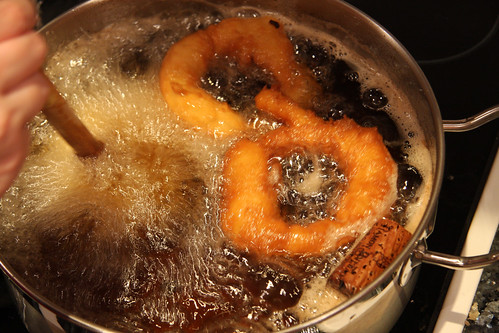 They made me open a brand new bottle of wine (you know how I hate doing that) just so they could put a cork in the oil. Something about it preventing fire or burning of the rosquillas.

I'm curious as to why this would be. Searching the internet, I can only find references to putting a wine cork in the oil when frying octopus, and even then the only explanation given is that "My mother always did it, so I always do." Does anyone know why putting a wine cork into frying oil would have any effect on anything? 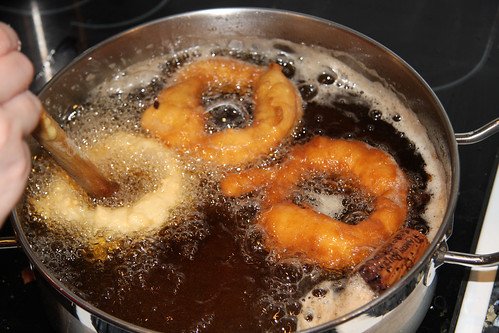 You have to keep a stick in the middle of the dough ring and spin it around at first until it forms a good shape. 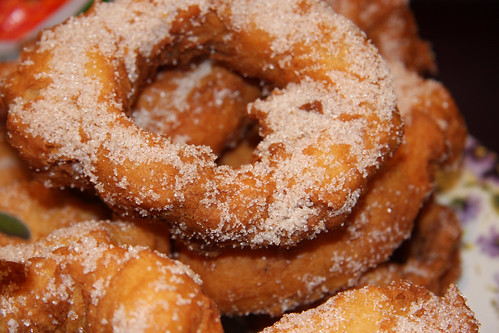 When they come out, they are lightly dusted avalanched with sugar. 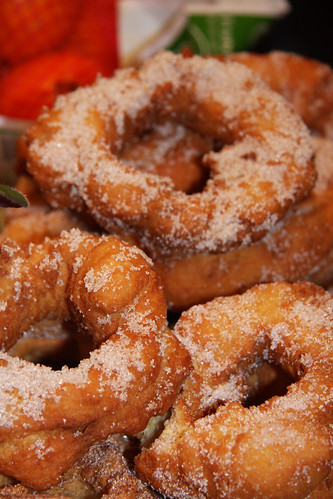 I ate one warm, and it was delicious, but everyone immediately informed me that eating warm rosquillas will make your stomach feel bad. When I asked why, I was chastised for always asking why. This was a fact that everyone knew (there's even a song that mentions it), and I should accept it as true. As I've already discovered, there is plenty of "common cultural knowledge" that is complete humbug, so pardon me if "everyone believes it" isn't good enough for me.

I suspect that the real explanation is that this "fact" was made up to keep little kids (and husbands) from robbing the cooling plate, and also supported, via confirmation bias and mothers saying, "See? I told you you'd feel bad!", by the times when too many of them were eaten because they were just so delicious. My bet is that the only difference between eating them hot and cold is that they taste better and you're more likely to overeat them hot.

But I fully admit that there could be some enzyme reaction taking place during cooling that is the real explanation. If so, I'd love to learn about it.