I was moving some books on the bookshelf today and Crime and Punishment leapt off the shelf, fell open, and ejected a piece of paper that must have once been used as a bookmark. Upon closer examination, the paper turned out to be a ticket to the Budapest Operahouse. It has been years since I thought about seeing the opera that chilly November day. In November of 1999, I traveled from Denmark to Budapest, Hungary, with an American PhD student friend of mine named Lily, the mutual friend that introduced me to my future wife. Lily and I went to visit another friend of mine, a beautiful Hungarian girl that I had met when she was studying in Denmark a couple months earlier. I had had a bit of a crush on this Hungarian lass when she was in Denmark despite her Danish boyfriend (who I think she later married), and I had been looking forward to seeing her when I booked the tickets a month earlier. But not a fortnight before the Hungary trip, things had started heating up with a certain Spanish señorita, and the trip came as an unwelcome week away from where I wanted to be. 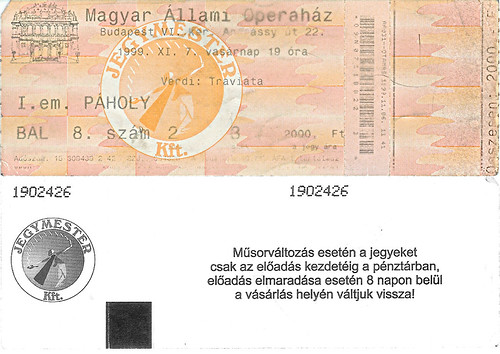 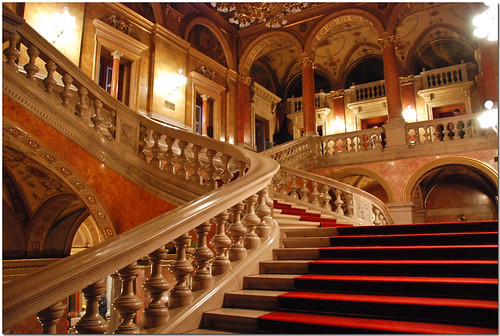 The stairs of the Budapest Opera House. (not my photo) 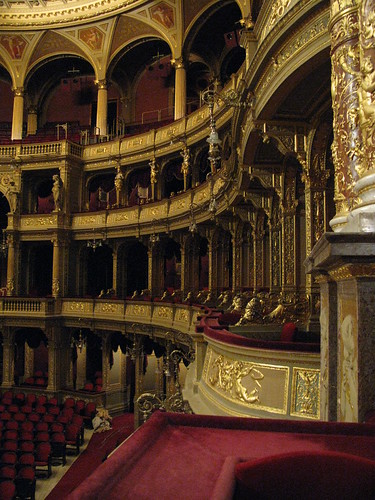 We were in one of these box seats. (not my photo)

I remember that the cheapest nosebleed seats at the opera were $0.10, and when we decided to splurge for the $15 box seats, the Hungarian family we were staying with was shocked that we would blow an entire day's salary on a single show. The main memory I have was about how dirt cheap everything was. The first night there we had a three course meal â€“ salad, goulash, and dessert â€“ with drinks for a total of $4.

So astonished were we at how little of our budgeted money we were spending, that Lily and I decided to have lunch at the Most Expensive Restaurant in Hungary, according to her guidebook. As I recall, the four course meal with excellent wine ended up costing us about $100 each. That's still one of the most expensive meals I've ever eaten, but the opportunity to take advantage of exchange rates and economic gap to eat at the Most Expensive Restaurant was priceless. 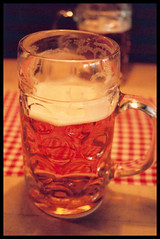 Another clear memory I have from that trip was going to a certain street corner to meet up with Lily and my Hungarian friend, arriving 15 minutes early, and deciding to duck into a pub for a quick beer. The bartender asked if I wanted a small or a large. Coming from Denmark, where beers come in whole or half pints, I opted for the large. The bartender brought me a huge one-liter stein. I gulped and gulped, but ended up leaving a good bit behind to go meet my friends. To this day it remains the only liter of beer I've ever been served.

It's funny how a little slip of paper absentmindedly placed in a book can follow you around from country to country, house to house, and then pop out and bring back a flood of memories like that.