A couple weeks ago, we ventured into the attic of Marga's aunt with the youngest children (the youngest is 18 now, I think) to raid her boxes full of baby clothes. She has two boys so a lot of the clothes and blankets and things were "too masculine" (aka. blue) to apply to our particular case, but there were some pink crib sheets that had once belonged to Marga's mother and had cascaded to the parent of the youngest child.

One of the items of clothing that we have inherited is a special kind of footwear called patucos in Spanish. I'm not sure what they are called in English. Footies? They are little sock-shoe hybrids meant for decoration and maybe a little warmth, but definitely never designed to be walked on. Pretty darn adorable. 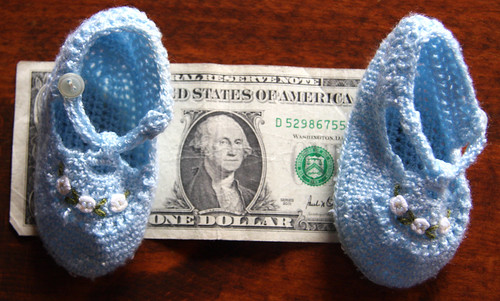 I included the dollar bill for scale, but I'm sure there's some symbolism in some culture about having your shoe soles on money.

Exactly one year ago, I posted a photo of some shoe insoles. Since then, that photo has received 3,900 views on Flickr and is my seventh most popular photograph. So it seems fitting that I post the following photo, taken off a shoe box, today. 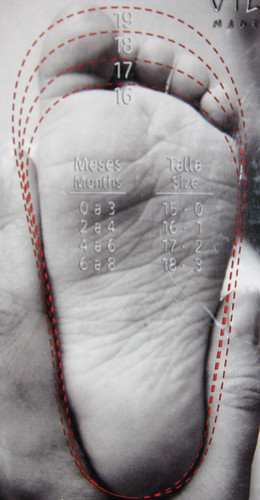 I don't know if these baby shoe sizes are specific to Europe or not. What size shoe do 3-month-olds wear in other countries?