by erikrasmussen, on Flickr")Most of you probably wonder how I am able to be such a good blogger, employee, husband, golfer, soon-to-be father, and still manage such incredible humility. Well, I'm going to let you in on a little secret. There are more then one of me. Normally it takes quite a bit of logistics to make sure we're never in the same place at the same time, but occasionally we get together for meetings and to synchronize our knowledge, so that Golfer Erik has a few anecdotes about family life, etc. This year, we decided to let Photographer Erik take a photograph of our meeting. 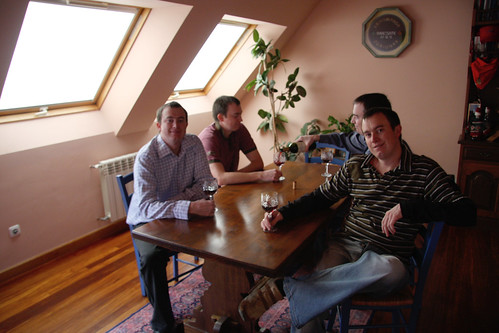 I've been wanting to do one of these for some time. I'm a little disappointed that it came out so blurry, but I was worried about holding still long enough to get a wide depth of field, so I left the camera on "default no flash". The whole project took about 20 minutes. I wanted to do it quickly because there were some clouds approaching and I was worried that the light source might change. First I sat in each position, and positioned wine glasses in reasonable places, careful not to move the chairs or glasses as I changed position. Then it was just a matter of sitting in each position and taking each photograph on a timer. And changing clothes between shot. I was going for the "party photography" look where the people closest to the camera are posing and the people in the background are ignoring the camera. The photoshopping to trim around each Erik was easier than I thought it would be. I'm quite pleased with how well the table reflections and shadows turned out. The wine pouring trick was just a matter of making the seam between photos pass through the stem of the glass.

That first paragraph was a load of nonsense. It's not true. Seriously. We'll I'll deny it.