Eight years ago today, I was in my apartment in Raleigh, North Carolina, packing my suitcase, preparing for a trip to Europe. I can very vividly remember every detail of my living room and television as I watched the inauguration of George W. Bush, whose "election" was decided by nine justices of The Supreme Court. It was cold and raining outside and also in Washington, D.C. Later that evening, I boarded a flight to Dublin, with a layover at London Gatwick. The airport security was, of course, no more or less of a sham than it is today, but it was much less intrusive of a sham. After working for a couple days in Dublin, getting very sick from some food poisoning, and spending the rest of the week curled up in a hotel room, I flew to Madrid, entering Spain for the first time. From Madrid, I somehow managed to take a train north to Vitoria, where a girl I'd met a little over a year before stood with her father waiting to show me her home town and introduce me to her family. The world I was entering was so incredibly different from anything I knew. Such was the first visit I had with my future in-laws. 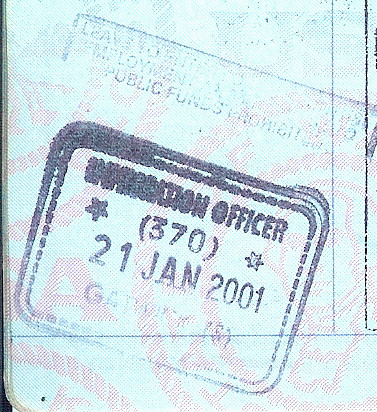 My immigration stamp at Gatwick.

The girl I was going to meet, overlooking her cloudy hometown.

These eight years were very good to me. I don't think my life would have been that different if SCROTUS had decided the other way, but I'd have been a lot happier watching the news each day, I suspect. I am definitely filled with hope for the next eight years, both for the collective life of my species and for my own personal family life.