While watching one of my favorite British television shows, QI, the other day, I learned an interesting fact that had been lost from my family for years. This is really brilliant.

The Vikings, when sailing around looking for new land to conquer, would use a bird to look for land. They would let this bird go, it would fly up to five thousand feet, look around, and if it saw land, it would fly in that direction. If it couldn't see any land, it would come back down to the boat. This wouldn't work with just any bird, of course. It had to be a non-migratory bird that was not accustomed to flying over and landing in water. It had to be big enough to see at that altitude, and have excellent eyesight. Because it despised water so much, the boat was a better option when no land could be seen.

As anyone with a distance to the horizon calculator can tell you, by going up 5,000 feet, the bird is able to see over 86 miles away! That's quite an improvement over 20' crows nest that only lets you see five miles away.

There's at least one story that reports that a Norseman by the name of Flóki VilgerÃ°arson discovered Iceland this way.

Question: What kind of bird did they use?

This was a forehead slapper when I heard the answer, not because it perfectly fit all the clues given, but because I knew that ravens held a special symbolic significance for the Vikings. Also, my great-great-grandfather, Rasmus Rasmussen, sailed to the New World in a viking longboat called â€“ you guessed it! â€“ The Raven. 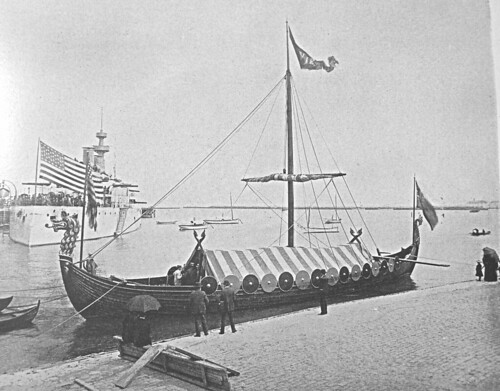 I'm pretty certain that Rasmus would have known the answer to that question.