You've Been 'Munked! - An Internet Meme Is Born

At no point in the process of creating this image did I realize what it would be in the end. All I knew when I started was that I felt like doing some Photoshopping. Struggling to come up with an idea, I was staring at some of the objects on my desk and two caught my eye, a gemstone globe and a miniature ceramic chipmunk. I'd already done the "creature standing on the globe" trick with the BITWRATHPLOOB blog header, but nothing else was coming to me. So I held the globe out at arm's length, focused on the chipmunk, and snapped a picture. Once imported into Photoshop, I cut out background and removed some of the background reflection from the globe's surface. At this point, it was clear that I needed a star field, so I found a Photoshop tutorial to generate one. As soon as I put the globe and chipmunk in the foreground, the text that was needed popped into my head, and I knew my creation was complete. 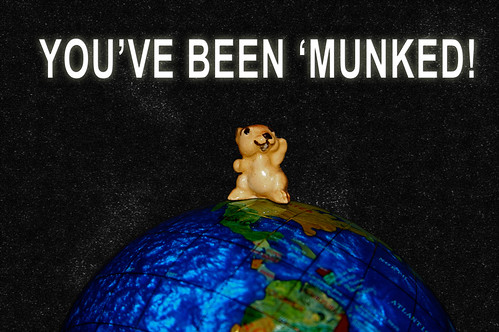 I don't know what this means exactly, but it sure seems like posting a link to this image will win any internet argument.

Code to embed this image