One day about ten or fifteen years ago, I was riding in the car with my father driving through the center of my hometown. He pointed to a new shop called "The Best Way To Buy!" It was a shop that specialized in layaway. He explained that they were using an ingenious marketing technique:

Take the absolute worst thing about what you're trying to sell to people and champion that as the most salient point of your advertising.

Since learning this, I see it quite often. I chuckle every time. In September, 2008, during the heat of the Presidential campaigns, I was watching Rachel Maddow (who is a hero of mine) and I wrote down verbatim a comment she made about Karl Rove.

"Rove's main strategy on everything is to take the biggest weakness and say the exact opposite. So the McCain campaign, which is run completely by lobbyists, is making themselves out to be anti-lobbyists and anti-corporations. That's what they will teach about Rove's politics in third grade some day if the country really goes down the tubes."

It really is a genius move. Now if I could just figure out what my greatest weakness is....

I thought about this stuff on Sunday when I bought, photographed, and consumed some candy toothbrushes. 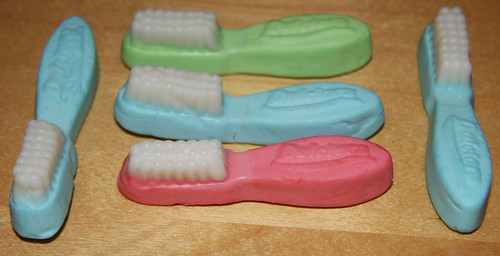 Of all the shapes they could have made...