The standard cheap lager manufacturer in Spain is called San Miguel. It is of very acceptable quality, and far better than the standard corporate lagers in the US. San Miguel is currently offering special promotional bottles with the purchase of any twelve-pack. To my surprise, the promotional bottles are made entirely of metal! It is very light, so I can only assume they are aluminum. The bottles feel colder to handle straight from the fridge, and the beer doesn't have any noticeable taste. I learned to drink in Denmark, where aluminum beverage cans were banned. All the beer in Denmark was sold in glass bottles, and, Danes being Danes, all the bottles were recycled very efficiently. As a result, I cannot really stand to drink beer from an aluminum can. I will if there's no other option, but if you give me a can, I'll probably ask you for a glass.

So the fact that I enjoyed the San Miguel directly from the aluminum bottle so much is strange to me. I have to wonder if they are doing this promotion for publicity or if they are actually considering using aluminum (a metal whose price is through the roof at the moment) to package their product.

As you may recall from geometry class, the cylinder is the most efficient stackable shape to maximize volume and minimize surface area (packaging material), so it seems like a pretty bad idea to sell beer in aluminum bottles when cans would be so much more efficient. But then, I'm not any kind of expert in that industry and I have no idea what glass bottle manufacturing costs are like. 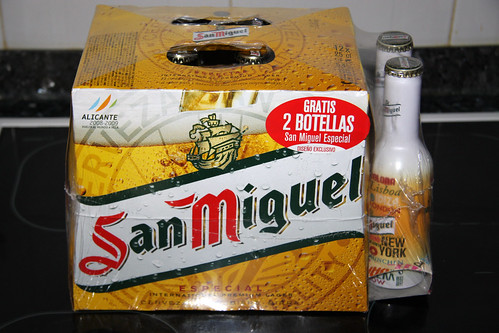 The twelve-pack and the two novelty bottles.

Okay, I have to go on a little inconsistency rant for a moment:

As far as I can tell, Barcelona, Milano, Lisboa, Paris, Monaco, Ibiza, Madrid, London, Manchester, Dublin, Berlin, Reykjavik, Torino, Praha, Amsterdam, New York, Bilbao, Munchen, and Moscow are all in the language native to their inhabitants (ignoring the alphabet issue with Moscow, the missing umlaut in MÃ¼nchen, and the missing accent in Reykjaví­k). But then Copenhague and Tokio are spelled in Spanish. And "Stokolm" doesn't seem to be a valid spelling of Stockholm in any language! C'mon, San Miguel! Why all the hate towards us Scandinavians??

WARNING! The following video may induce thirst and desire for beer consumption.

San Miguel did not pay me anything for this post, but I am more than willing to accept any form of compensation, be it monetary or liquid, from them in the future.