We had a very intimate Christmas celebration this year, in which small children were saliently absent. It was just Marga, her sister, grandfather, mother and father, and me for Christmas Eve dinner (the most important meal), and then her Aunt Marga and sons joined us for Christmas lunch. As usual, there were so many appetizers that I had to turn down the main dish. 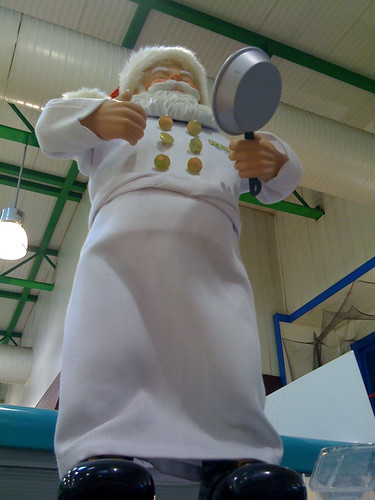 Chez Claus at the local grocery store buying seafood. His hips undulate back and forth to monophonic Christmas carols. Delightful. 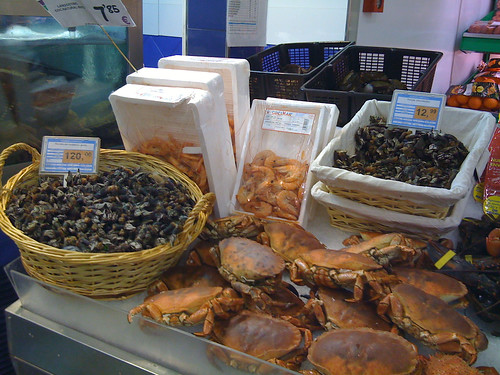 Crabs and barnacles. 120.00 €/kg for locally harvested (captured?) barnacles, and 12.99 €/kg for imported barnacles. Such is the nature of seafood in Spain. 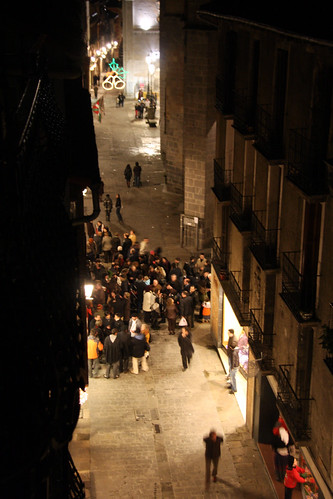 We started dinner on Christmas Eve at around 21:00, a lot earlier than most people. The bars were so full that they were overflowing onto the streets. 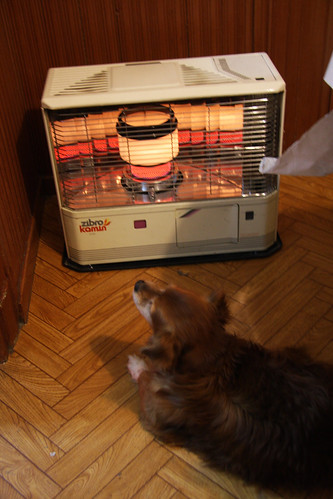 Elderly Tiko partakes in his favorite pastime, staring at the space heater. 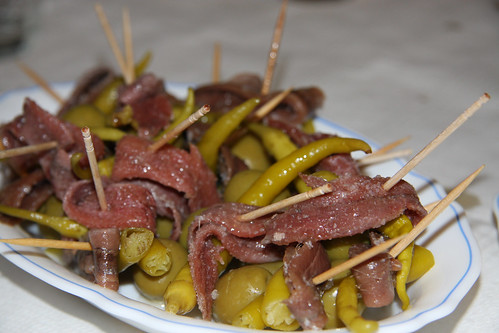 These are called gildas (HEEL-das), they consist of an anchovy, a hot pepper, sometimes a cocktail onion, sometimes a small pickle, and an olive together on a toothpick or plastic cocktail sword. The flavors are very strong, but they are much more palatable when the whole thing is eaten in one bite.

For this blog entry, I did a Google search to see if I was spelling gilda correctly, and all the results seemed to be about a 1946 Rita Hayworth movie. Then I tried the Spanish Wikipedia and found my answer (you can even have that page read to you!):

The name Gilda was bestowed on this pincho in reference to the principal character of the 1948 movie by that name starring Rita Hayworth since the shape that it takes when placed in a vertical orientation is reminiscent of the silhouette of Gilda's dress.

I've eaten many of these at various levels of inebriation and never once was I reminded of a voluptuous female form. But whatever. They're delicious! 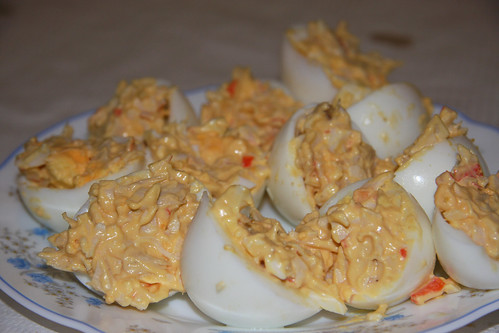 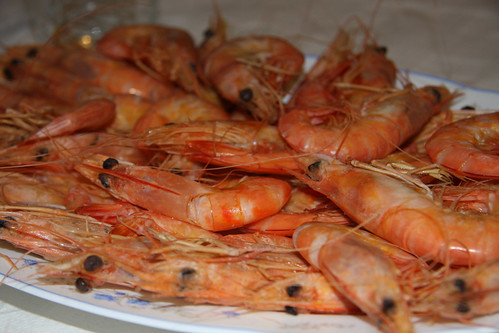 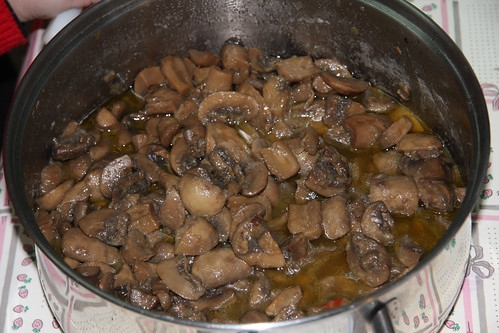 Mushrooms. This is a favorite dish of my sister-in-law.

Every Christmas Eve in Marga's family, people start singing songs around the dinner table. For years they've been threatening to write down the lyrics "so that Erik can follow along", but it never gets done. This year, I think Marga was feeling her grandfather's mortality, particularly in relation how much her daughter will get to know him. So she grabbed a pen and began an anthropological study of her family's Christmas carols right there on the shimp-stained paper table cloth. Here's an example of a song from a couple years ago. 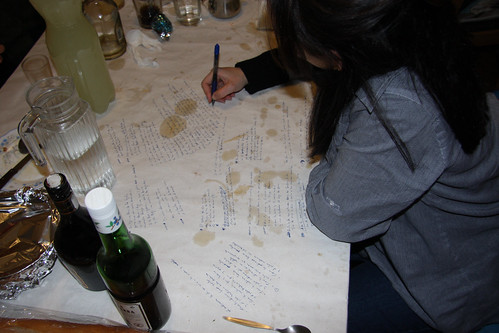 After dinner, we ripped off this piece of the table cloth. I joked that we could frame this famous 2008 Christmas Eve table cloth and my suggestion was met with serious enthusiasm. First we'll have to get the writer to digitize the illegible scratchings she's made. 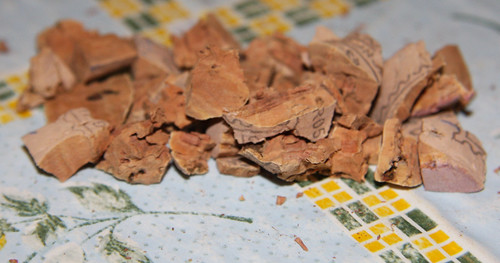 A little masterpiece of mine from a couple hours of playing with a wine bottle cork. Hold your applause until the end of the post, please. 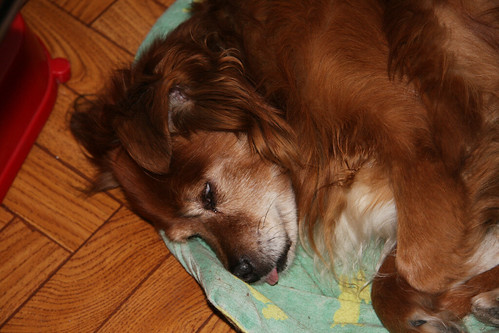 You know you've had too much to drink when people are taking photos of you asleep with your eyes open and tongue out. 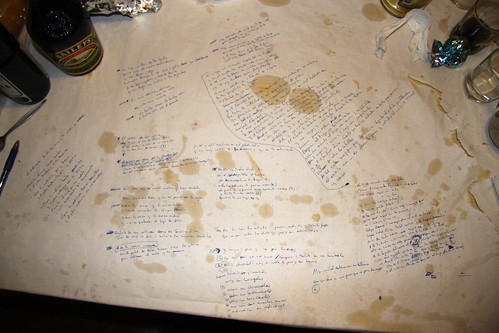 Marga's work of art is complete. 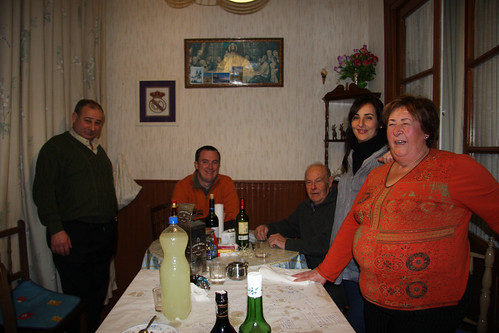 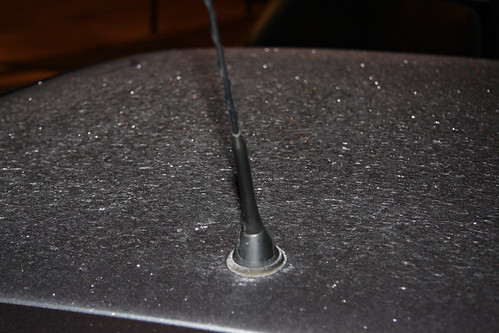 When we went outside after dinner, all the cars looked like this. 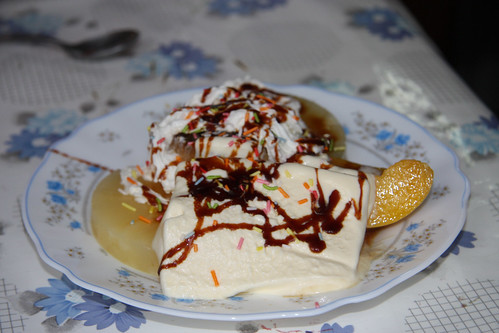 On Christmas day, we had the leftovers from the previous night and, for dessert, a dish called a pijama (literally "pajama", as in you can't go to bed without one): pineapple, peaches, flan, ice cream, whipped cream, chocolate sauce, and sprinkles. 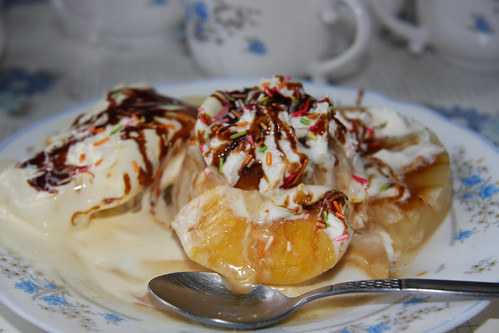