Several friends highly recommended that we go to a special private ultrasound clinic. For 100€, we were told, you get much clearer pictures of your unborn child. We considered not doing it and saving the c-note, but in the end our curiosity got the better of us. Not to mention our bad experience with the public obstetrician. When our friends told us to be sure to bring a blank DVD with us, any doubts I had evaporated. Any doctor tech savvy enough to burn an optical disc must be good. The office was in the center of Santander, a 40-minute rainy drive away. We seemed to be the first appointment of the day at 10:00. A receptionist came out and asked for Marga's national id card and the date of her last period (that's how the whole pregnancy timeline is calculated for you uninitiated). After a couple minutes of appreciating the art in the waiting room, we were summoned into a dimly lit examination room and Marga was instructed to disrobe her abdomen. After a minute, a gentle softspoken doctor entered the room and the first words out of his mouth were Marga's full name. Already he was off to a better start than the cold robot women we'd had before. He asked how she had been feeling, if she had been feeling the baby kick, what her concerns were, etc. The examination room was set up with the ultrasound machine to the left of the bed and (get this!) a monitor directly in front of the bed so that Marga could see everything that was being displayed on the monitor! The doctor explained everything he did in a soft calming voice, "Now I'm going to measure the cranium; perfectly normal. Now I'm going to examine the heart; very good, everything is developing just as it should." We could see why this guy came so highly recommended.

And the technology.... and the technology. I was almost in too much nerdy computer user interface programmer awe to take in the proper awe of seeing my child's face for the first time. Somehow with a single ultrasound paddle, the machine is able to construct a perfect three-dimensional model of the fetus inside the womb. The screen looks like a normal ultrasound display, but then the doctor selects a portion of the image to view in 3D and everything goes magical. The computer gives a shaded rendering of the contents of the womb that can then be, without moving the paddle (software only), rotated on all three axes until the best angle to see the fetus has been attained. And then you can watch it in real time! This technology is misnamed by the marketing goofballs as 4D Ultrasound. Un. be. lievable.

Without further ado, I present to you, the face of my daughter... 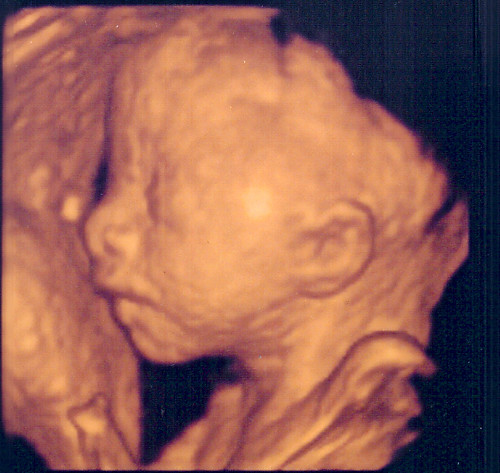 Is it just me, or does that ear look a little low to you? I know, I know, she's still in beta and hasn't officially been released yet, but... 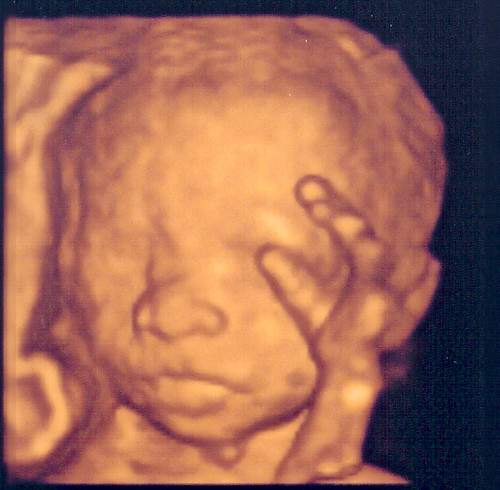 The nose and mouth seem quite wide (almost African?), but other than that, she's a pretty good looking fetus.

I must admit to having a few of those ridiculous "Oh my god! My daughter is the most beautiful creature ever to exist in the entire universe!" thoughts. Apparently I have some parental neurons that are firing for the first time.

Going into this exam, we had a few doubts about the nonchalant Declaration of Gender given to us by the previous obstetrician, so when the doctor started examining below the waist and asked if we knew, we said that we had been told, but that we wanted him to give his analysis. He adeptly positioned things perfectly to leave little doubt that my child is the proud owner of a vagina. That's good, because we've been picturing a little girl for weeks now and have been given quite a lot of pink clothing.

Despite the amazing 3D nature of the video, there are still parts that are hard to make out on first viewing. The legs don't look like much until the end of that segment when they become clearly recognizable human legs. She weighs 640 grams (1 lb, 6.5 oz), which he seemed to determine somehow from the size of the cranium. Everything (heart, brain, kidneys, lungs, spinal cord, noggin, eyes, hands, limbs, etc.) is perfectly normal (nothing superhuman yet, I'm afraid) and she's a little bit towards the large size of the bell curve at this juncture. (To which Marga responded, "See? I told you I was enormous!")

No doubt you will all want to carry this amazing video around on your iPhones like I do, so here's an iPod-compatible version for you to download (6.1 MB).