On Saturday, we braved the mall scene again and went to investigate strollers, cribs, and car seats. We knew nothing going in, and we learned a lot. Many manufacturers sell a bundle of the necessary items, a car seat and a stroller that can either have a little bed for the first 6 months or a seat for the 18-20 months after that. And the car seat can be unhooked and carried around as well. Some models are futuristic and trendy, and some are the old faithful common models that never go out of style. Some fold up better and easier than others. For some of the models, apparently, because the models change so often (to tempt trendy parents into buying more than once?), you actually have to order your stroller directly with the manufacturer and wait three months for it to be produced and shipped to you. Crazy! And we thought we had plenty of time on this!

In the bargain basement of one store, we browsed some of the stuff that hasn't been selling well upstairs. In the kitchenware section, I saw the coolest pepper mills I've ever seen. 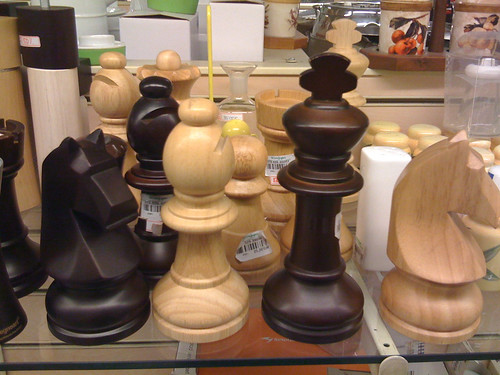 Pretty cool, huh? Not quite Staunton, but close. The problem is that you don't need 32 pepper mills, so you'd have to choose your favorite chess piece and buy that one. It would be cool if the white ones were salt shakers, but they all seemed to be for grinding pepper. At 25€ each, I can see why they weren't selling.