It has always seemed odd to me that, in the English language, we say "It's a boy!", or "It's a girl!" Why not "She's a girl!" or "He's a boy!"? But then we say "It's me," when calling someone on the phone. In Spanish, they say "Soy yo," conjugating the verb into the first person. Kind of a dumb tautological sentence in any language. But I digress...

The wave function has collapsed, the universe has bifurcated. The sex of the fetus has been observed. The obstetrician at the local hospital is not nearly as friendly as someone dealing with nervous parents should be. She stares in silence at the monitor for a long long time before telling you anything. And the first terse nurse is worse, grunting towards a chair for us to sit down. The whole process could use some people skills. I asked if I could record some video of the ultrasound monitor and was ambiguously told, "Well, it's supposed to be prohibited."

They made us sign a paper that stated that, "Everything we tell you during this visit might be completely false and you cannot hold us to any of it," before the procedure could begin. That's always nice to hear. When one of Marga's coworkers went there for her second ultrasound, the obstetrician looked for a while at the monitor, didn't say anything, let her go home, and then called her the next day to inform her that her baby was dead. Sheesh. The hardest part of being a doctor is giving patients bad news, but that's just plain cowardice. Whoever did that should be fired.

Needless to say, I was pleased to see a strong beating heart on the monitor.

The user interface of the ultrasound machine impressed me a lot. The obstetrician measured the skull and femur by pausing the video and dragging a dotted line around the screen like the marquis tool in Photoshop. Unfortunately, because the room was so dark, my camera couldn't focus on the screen very well, but at least you can get a sense of what I was describing about how much more three-dimensional things look with the video as opposed to a still shot. I took about 10 minutes of video during the 30 minutes we were there, and I have trimmed it down to 90 seconds so as not to bore you all to death. The video starts with a beating heart, moves on to a good profile shot with mouth opening, then a good spinal cord angle, and finishes with some itty bitty legs and arms. The whole video fills me with a sense of claustrophobia and a desire to extend my arms and legs out of the fetal position. Check out the full leg extension kick the kid gives at the very end. Whack! 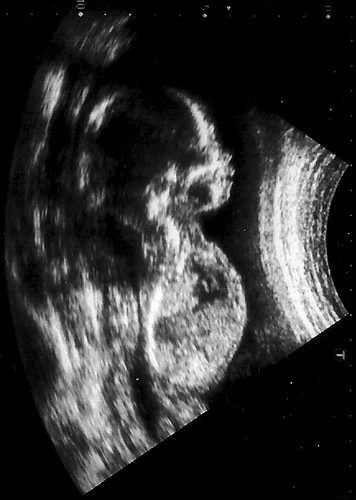 I was going to tell you that the sex of my child is the 21st word of this post and make you work for it, but I don't think I'll be that mean. You can just check the last word instead. If you got it from the post title, I'll buy you a Mexican beer. I considered "Roman Twenty" as well.

Marga and I are going to have a daughter.