It's been at least a decade since I have taken part in a pumpkin carving ceremony to produce a jack-o-lantern. Last year I didn't really have the option because we had just returned from our honeymoon, and I've been feeling nostalgic about the practice. So this year I decided that there would definitely be pumpkin carving!

I began looking around in the grocery store but all they had were small white pumpkins, produced with human consumption in mind. I asked my local grocer, Andrés, if he could acquire "one of those big orange pumpkins that the Americans use for Halloween" for me and he said that, while they are very rare, he had seen some and he would ask the farmers he buys from. I went to the town market and found some strange acne-covered orange gourds grown and sold with decoration in mind, but none were appropriate for the tradition I wanted to partake in. A few days passed, and Andrés told me that he had asked around, but that all his growers had stopped producing that breed of pumpkin this year because there was just no market for them. I was crushed. I solemnly informed Marga, who had been hearing propaganda and hype about pumpkins from me for weeks, that there would be no Halloween this year.

On Monday, October 27, the doorbell rang. Through the intercom, I heard, "Erik! It's Andrés. Let me in, I have something for you!" My eyes lit up with that childlike wonder captured in so many Christmas films. Sure enough, Andrés walked up carrying a big orange gourd. He explained that he had seen it at one of his sellers' stalls and explained about the heartbroken American he knew and they gave it to him free of charge, a price he passed on to me as well. I was ecstatic!

On Wednesday, October 29, I introduced Marga to pumpkin carving. 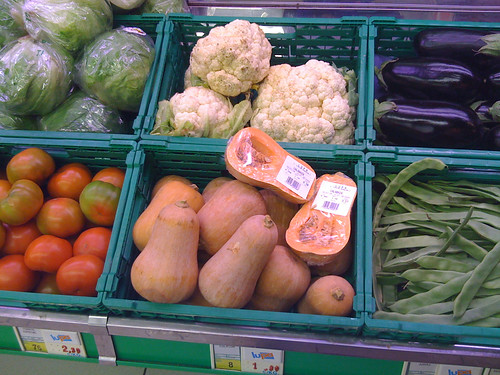 These are the typical pumpkins in the supermarket, and what a Spaniard will think of when you say the word pumpkin, calabaza in Spanish. 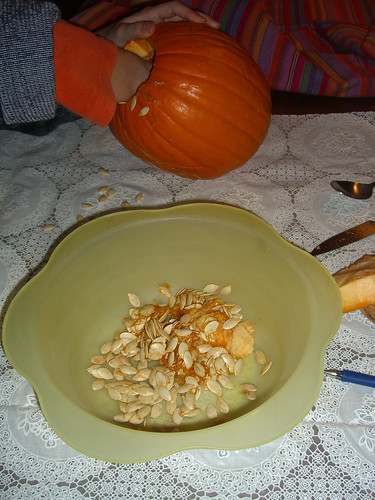 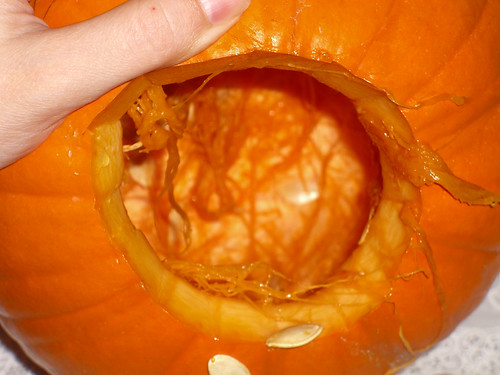 Don't you just want to stick your hand in that hole? 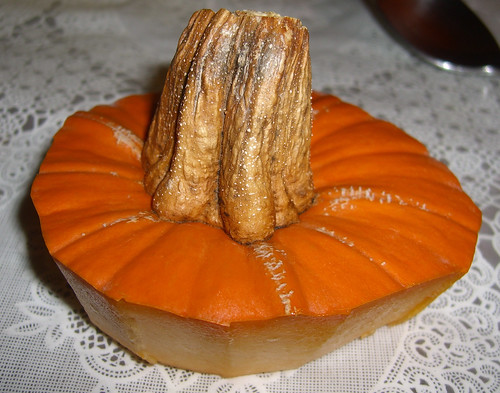 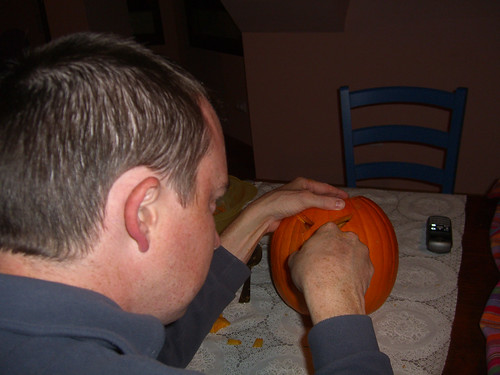 I don't think I've ever seen the skin between my ear and hair before. Weird. 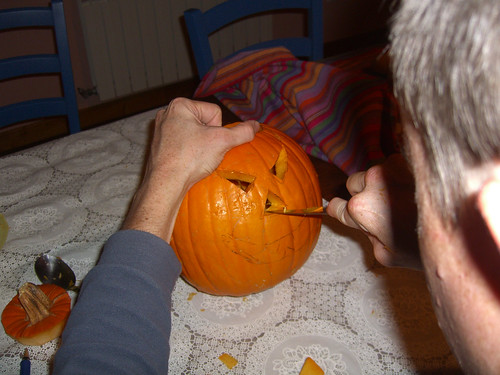 The more it begins to look like a human face, the weirder the sensation of jamming a sharp knife into it becomes. Sheesh! And I thought the pumpkin had a bumpy face! 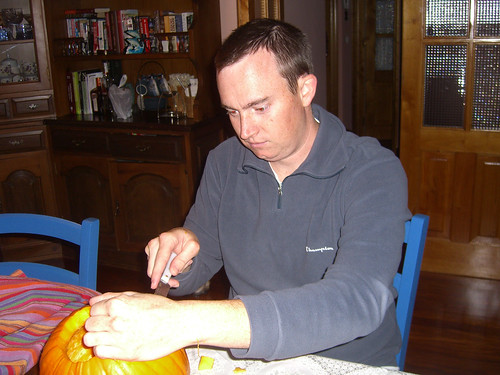 An artist at work. 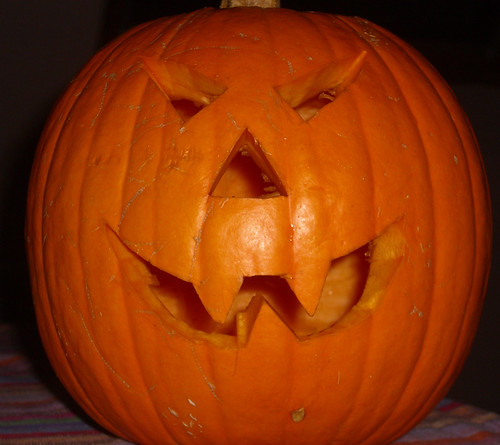 The final product. Not all that scary with flash. Here, let's fix that... 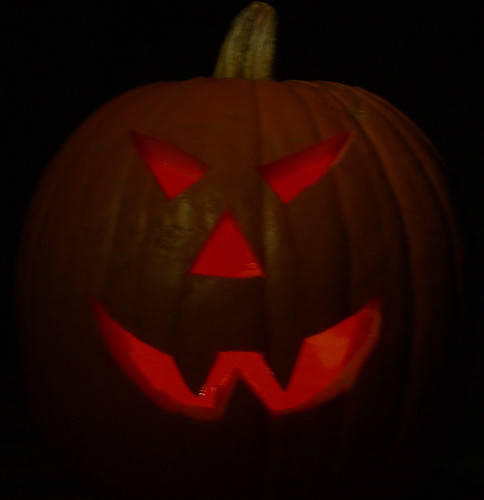 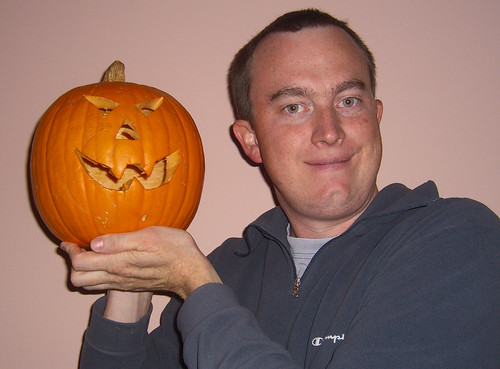 Goardgeous! When I asked Marga to take this photo, I had some photoshop head switching in mind, but, I couldn't hold it in the right way to make it photoshoppable. 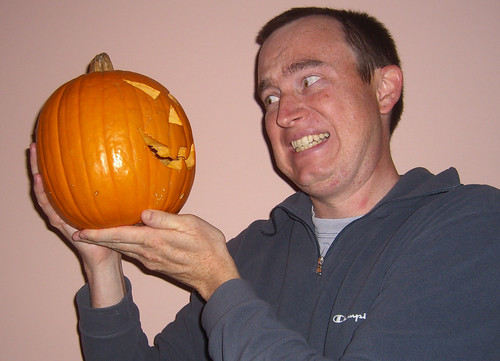 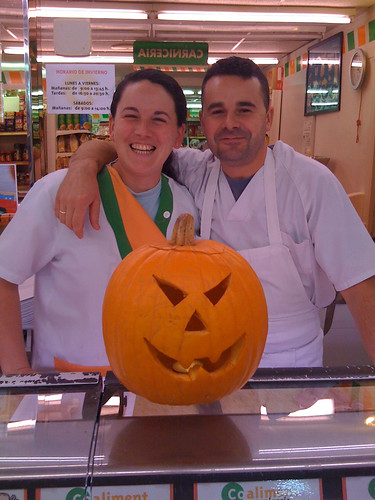 I took Sr. Calabaza back to the local grocery store to show Andrés. Also, since I thought it was a shame for such a beautiful work of art to sit, unseen, in my house (no porches in Spanish apartmentland), I decided to leave it with my friends at the grocery store. Andrés wasn't there, unfortunately, but these are his siblings, Leticia and Bruno at the deli. Very photogenic, aren't they?

Now they will be spending all day explaining that their only American customer made them a jack-o-lantern for Halloween. 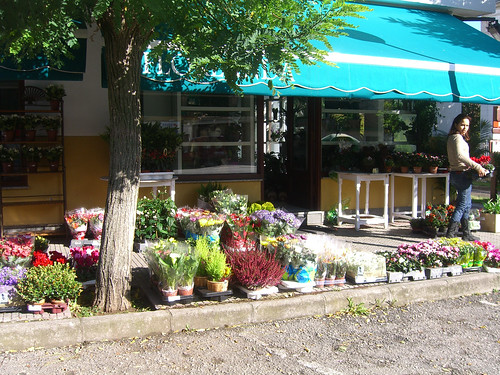 This is what Spain does for Halloween. It's the single most profitable day of the year for Spanish florists. Know why? It's because almost everyone visits their loved ones' graves on November 1, All Saints Day. Not nearly as fun as pumpkin carving.