The Groups feature on Flickr, along with photo tagging, is what makes Flickr so interesting and better than other photo sharing websites. The structure is wide open. Anyone can start a group, and anyone can add any photo to any group. And, importantly, the group administrator (the person that started the group and anyone the creator deems worthy of administrative rights) can remove any photo from the group. So what you get are groups about certain topics, e.g. flowers, clouds, reflections, west highland terriers, horses, rusty things, door knobs, etc. If you upload a photo to Flickr that fits into one of those groups, you can join that group and add your photo to it. The point being that other Flickr users that like photographs of said subjects can find lots of photos from many different uploaders about that topic. Some groups have sprung up in which members can participate in photography competitions. This week the topic might be "cute dog nose pictures", and next week it might be "stained glass". Members can vote and someone does the work to tally the votes and declare a winner of each competition. Pride is usually the only prize, probably. The result is that it's one group that changes topic every week or every day even. It's a fun idea and shows the growing social and participatory nature of the internet.

One Flickr group that I have been trusted with administrative rights over is called I Wake Up Screaming (IWUS). That which I love about the group is also that which causes many photo submitters great confusion: irony. IWUS is a place for photos of objects that were created with the greatest sincerity and not meant, by their creators, to be scary at all, but if you look at them through the eyes of a child sitting at a campfire hearing scary stories, the object is clearly completely terrifying. As a general rule, anything to do with clowns [shiver!] fits this description. It's a fun way to look at the world and, if you try it, you'll find yourself laughing to yourself as you pass shop windows or go to the flea market.

Yesterday, I became aware of a new kind of Flickr group: Flickr Group Roulette (FGR). Rather than pick a topic each week to submit photos about, they choose another Flickr group and (try to) follow the submission rules for that group. Yesterday, by complete chance (and maybe a little to do with Halloween approaching), FGR chose IWUS as a group to infiltrate. In came dozens and dozens of IWUS submissions, only very very few of which actually got the irony at the heart of the group. FGR very much encourages self portraits, which is why they all have people in them.

Here are a few examples of yesterday's FGR-takes-over-IWUS submissions:

First, we have our literalist, the absolute opposite of irony. A photo of actually waking up screaming.

Getting better. This submitter is acting out a nightmare. Still missing the point, though. 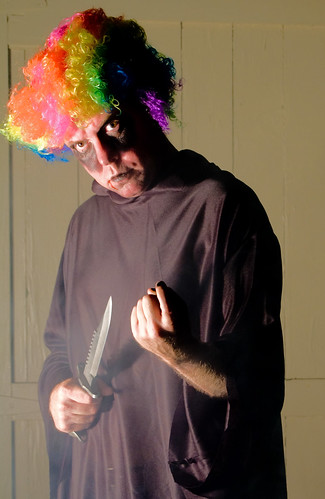 The clown angle is good, but this submitter (awesomely named The Goat Whisperer, by the way) is trying too hard. The point of IWUS is that clowns are scary enough, or more so, when they are trying to be friendly.

This is a great one! He's found a perfect IWUS object, one made with friendly intentions but can be seen as horrible, and posed with it. 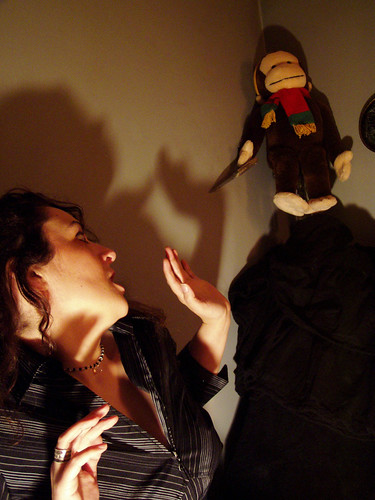 Thanks to all those Flickr Group Roulette players that have visited our humble little group lately. Now go away to rough up some other group and leave us in our ironic peace.