Nothing like telling people you're expecting a baby to send those advice-giving neurons a-firin'. One good tidbit we received lately, was that there is a store in a local mall that has really cheap prices on decent baby clothes. Being the clueless cheap-skatepenny-pincher prudent first-time parents we are, we had to go check it out.

We left home at noon on Saturday morning and returned home from the mall at 9pm. The mall is 20 minutes away. Including lunch, a coffee, and three bathroom breaks, that's over eight hours in the mall! We went directly to the baby store, found and purchased 40€ worth of tiny infant pajamas, towels, body suits, etc. Ten minutes after parking the car, I was loading the baby goods into the car. Then my sister-in-law arrived, we had lunch, and went on the never-ending search for maternity clothes and the ever-elusive loose, but warm, long-sleeved blouses that could be worn with or without a baby in your uterus. The final concensus after about 7 hours was that, despite unmistakable swelling in the past week, it's still too early to shop for maternity clothes. I was a remarkably good sport about the whole expedition, I think, doing my best not to be the annoying bored mall husband. I occupied my time by searching for interesting photos to take with my iPhone. 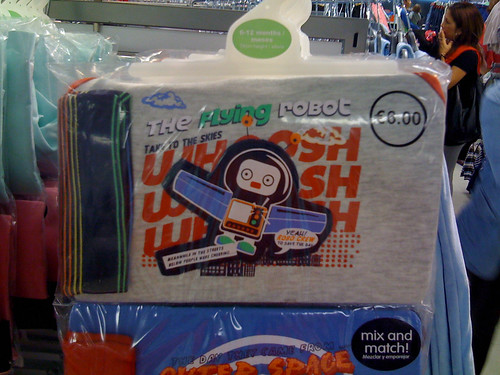 I had the most fun in the baby sections. Some of the clothes with little friendly giraffes or bears or puppies are pretty heart-meltingly adorable. But some are just weird.

Good to get the little ones thinking about unmanned drone warfare. It's probably the only type they'll ever know. 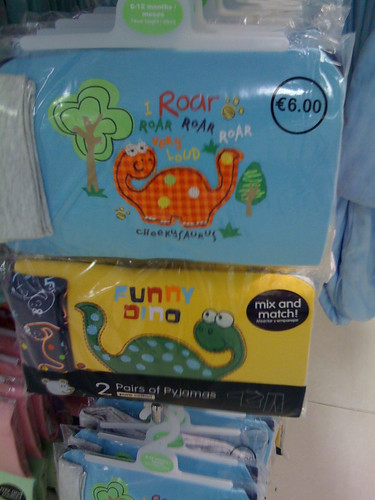 Cheekysaurus. Maybe it was just this store or the brands it carried, but all the shirts were in English. I saw nothing written in Spanish on any baby apparel. It's really fashionable to have English written on your clothes in Spain. In England, all the perfume ads on television end with their slogan spoken in French. In Spain, it's the same, but spoken in English. I quizzed my sister-in-law, who can hold simple conversations in English, if she understood some of the shirts. In the adult pajama section they had things like a drawing of a cute donkey and the words "Sweet Ass!" or ditto of a rabbit with "Cute Buns!" She didn't understand any of the double meanings. 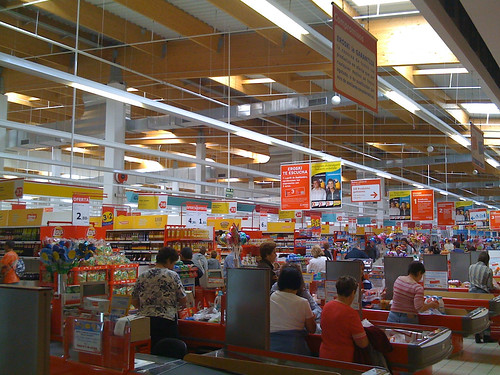 A huge grocery/everything store inside the mall, a Basque chain called Eroski. 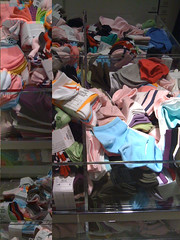 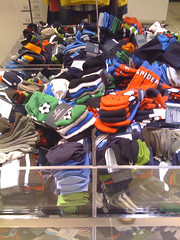 Girls socks and boys socks. Can you tell which is which? My iPhone had a weird malfunction with the photo on the left. I'm not sure what happened. 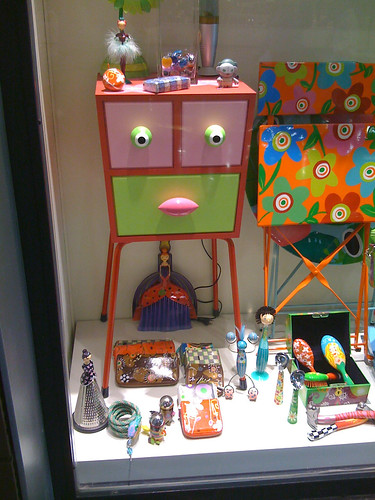 Gah!!! Who could sleep with one of these in their bedroom? I don't have the cojones for these cajones. 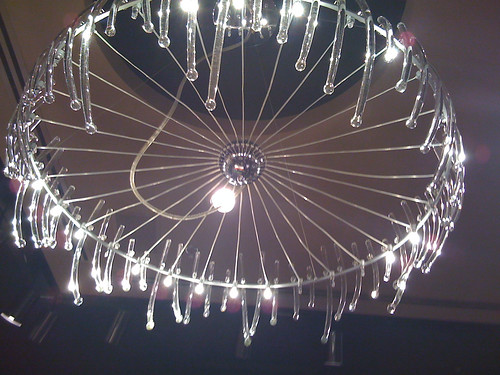 Some of the clothing outlets have really cool decorations. This is an icicle chandelier. 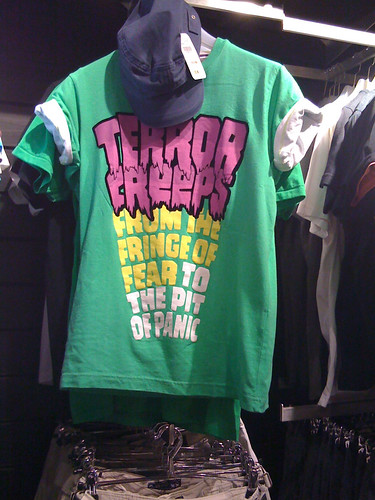 What a horrible, horrible t-shirt! "Terror creeps from the fringe of fear to the pit of panic." At least there's some alliteration. The internet informs me that this phrase is from a B-movie poster from 1964 for the movie The Black Torment. Nothing like 44 years to make the crappy cool again. 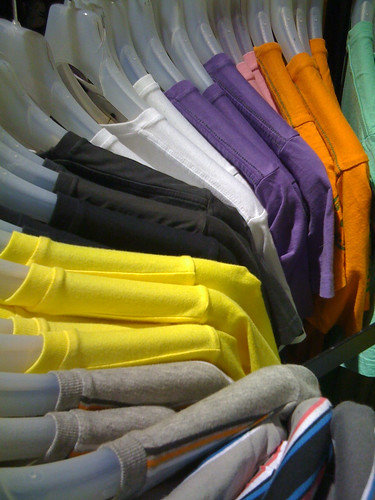 Shirt colors in a circular rack. 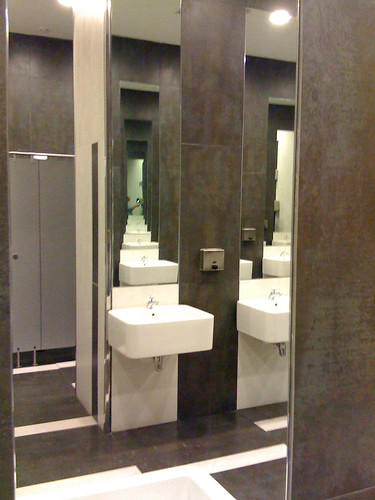 The mirrors an sinks in the bathroom were aligned to make the hand dryer that was 3 meters away look about 100 meters away. 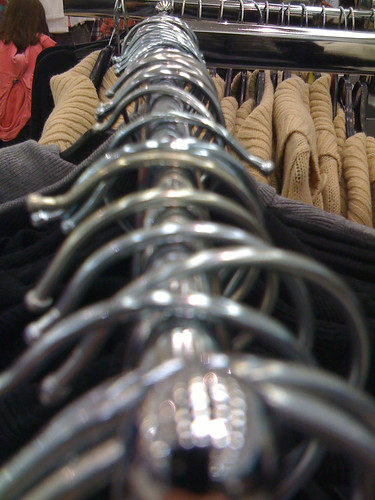 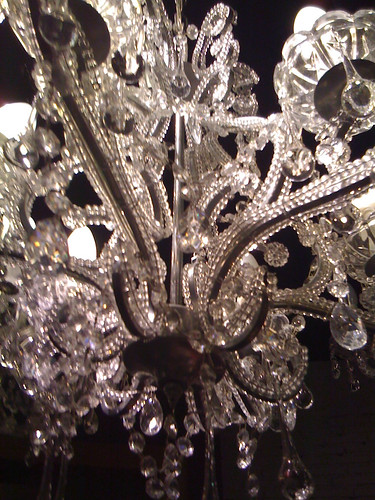 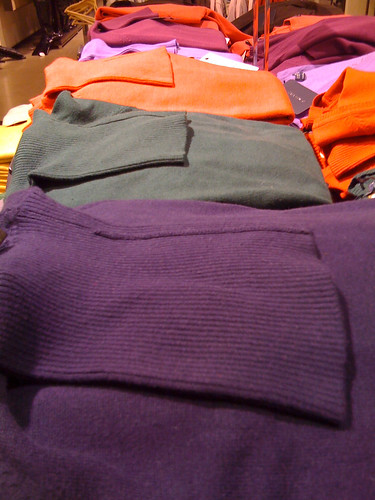 Solid turtlenecks. In case you're wondering, the consensus across all the major stores is that the fashionable colors this winter will be purple, gray, and black. Like a bruise. 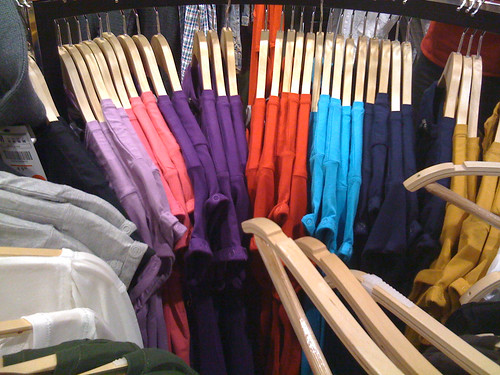 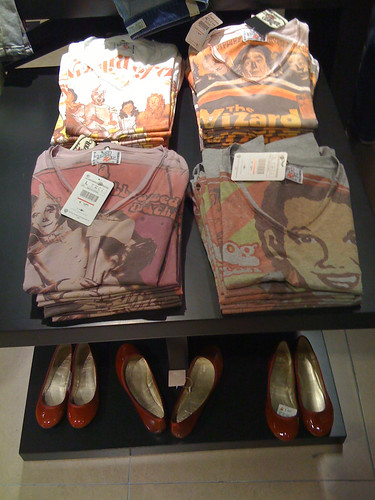 Just as I was lining up my photograph of these Wizard of Oz shirts, I noticed what was underneath them and gasped with delight (the movie nerd kind, not that kind). I ran over to a shop attendant who was folding sweaters and complimented her on the cleverness of putting red shoes under the Oz shirts. She said that it was a complete coincidence, and I'm not even sure she understood the significance of the juxtaposition. Oh well. 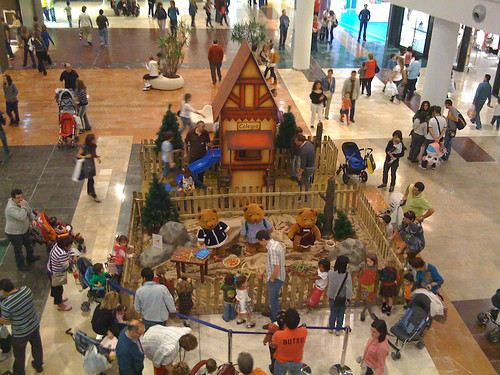 These little ursine robots were mouthing along to way-too-many-decibels treble-boosted children's music for a few hours. It was unbearable! This might be the part of parenting that I least look forward to.

To recover sanity, we spent Sunday in the soon-to-be-gone-for-two-decades peace and quiet of our home and taking a multi-hour walk in the bright sunshine and clean crisp autumn air. It was, in other words, the exact opposite of the mall.