A couple weeks ago, I set up my Canon 40D and Optika Timer to take a timelapse video of the roof repair effort. It took just over one thousand photos and then stopped.

Err 99 Shooting is not possible. Turn the power switch to

At the time I just assumed that the battery's charge had run out, since I had not thought to fully charge it before setting up the shooting and it had been shooting for a couple hours. It was only when a full charge changed nothing that I began to get worried. Searching the internet, I learned that Error 99 is just about the worst problem a Canon camera can have because it's the generic "Something is wrong, but I don't know what" error message. They say that it's often an electrical error, particularly caused by improper connections between the camera body and its accessories (e.g. lens, CF card, battery). They tell you to get a clean pencil eraser and rub it on all the electrical contacts between the battery, lens, and camera. I tried this, but to no avail. My expensive DSLR camera is less than a year old and is now just a paperweight. 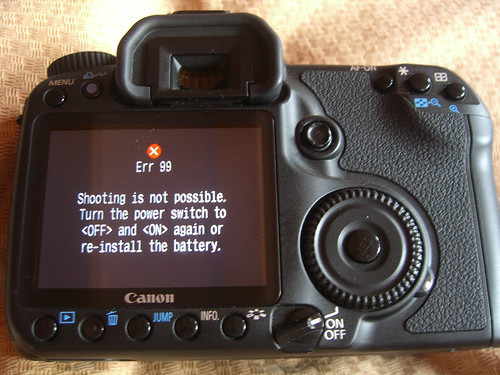 This was when I began worrying about the ramifications of my idea to buy my camera in a country where I don't reside. Not only that, but I don't have any of my warranty documentation! I called up the US Canon support tech line and spoke to them. They explained that the warranty information page wasn't important, it was the receipt of purchase that mattered. It had to show the purchase being less than a year ago. Yay, Amazon emails! They said I could call the Spanish Canon hotline to find a service center here, but when I did, they had a message saying they were closed (not 24-hour like the US line).

In the end, I decided it would be the least hassle if I used the US service center, especially since I had the perfect opportunity to conduct the repairs from inside the US. My parents were visiting, could take my camera to the US, mail it to the service center, receive it back a few weeks later, and then I will be traveling to the US in late November and I can pick it up then.

I know at least two of my regular readers are in the Canon 40D club, so I warn you, if you ever see Error 99, your camera needs service a.s.a.p.

By the way, the school roof repair was a success. 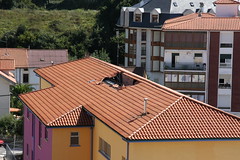 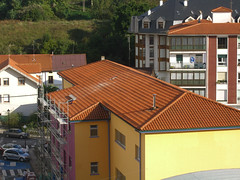