As I finished up my thirtieth trip around the sun last week, I thought I would impart some wisdom I have gained so far, both to hear what people think of it and to be able to look back later and laugh at my naiveté. One of the things I love about being a computer programmer, is that I spend a good part of each day in a world of absolute truths. Boolean ones and zeros. Either the client record in the database has a phone number or it doesn't. Unfortunately, this way of thinking and reasoning about absolutes does not work well in the real world. I have come to realize that, when it comes to political, social, and moral issues, there are no right or wrong answers, nothing is black and white. Everything is gray. Every single issue, be it socialized medicine, bullfighting, abortion, preemptive war, social security, warrantless wiretapping, the death penalty, carbon emissions, terrorism, or torture has good arguments on both sides. If you cannot understand why someone would feel the opposite of what you feel about an issue, then you're not reasoning maturely and open-mindedly enough about the issue. It's up to everyone to weigh up the pro and con arguments and decide where on the spectrum between for and against they fall.

In the branch of computing known as artificial intelligence, there exists a concept known as the neural network. In an attempt to write smarter programs, computer scientists decided to model their computer programs after neurons in the brain. Each virtual neuron in the program has a certain number of inputs that range in value from 0 to 1. The neuron has weight value assigned to each input that determines how important that input is. A calculation is done and, if the combination of inputs and their weights is over a certain threshold, the neuron fires (outputs a 1) or does not (outputs a 0). What is special about this system is that it allows for learning. Based on the result of the neural net, some outside agent tells the network how wrong it was, and the information is backpropagated through the network adjusting the weights and thresholds so that next time it receives those same, or similar, inputs, the network will produce a better result. This is very similar to our understanding of how the nerve cells in the brain work.

I really like this way of thinking how we reason about information and learn from previous reasoning mistakes. To give one example, in the past eight years, many people have lowered the weight they give to a political leader that insists an enemy is going to attack any minute now and must be preemptively attacked. If it happens again soon, that input into the decision-making process will be largely ignored.

In talking about about social, political, and moral issues, I use the words "spectrum" and "continuum" a lot because those are the images I have about reasoning. When you're first learning about adding and subtracting integers, you are taught to draw a number line with discrete marks for each integer value. Then, as you move into algebra and plotting functions in coordinate systems, you learn that there are points between the integers. And in calculus, you learn there are an infinite number of points between any two points, that the world of numbers is indiscreet indiscrete. So, too, is the world of human opinion. Between any two people on the conservative-liberal continuum, you can find another person that fits between them.

In my mind all there are thousands of these Issues Axes that we all fall on. I like to think of them as independent and orthogonal, thus creating a multi-dimensional Opinionspaceâ„¢, they are clearly not all independent. If you are against separation of church and state, you're probably also against legal abortions, for instance.

As I was preparing my mental draft of this post, I came across a questionnaire on another expat-in-Spain's blog that perfectly fits in with my way of thinking about things. The questionnaire, created by PoliticalCompass.org, asks for your position on a wide range of issues and then tells you where you fall on a plane containing the political Authoritarianism-Libertarianism and economic Left-Right axes, an orthographic projection of your Opinionspaceâ„¢, if you will. 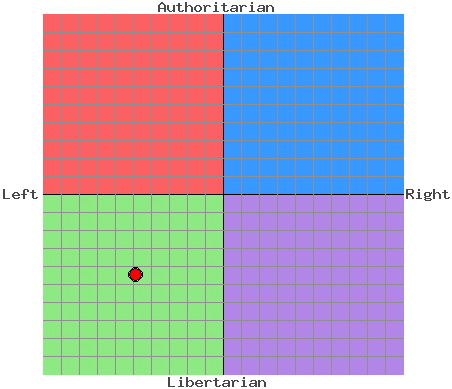 My political leanings. I knew that I was in the green quadrant, but I was surprised to find how close to the origin I ended up.

As soon as my wife got home, I had her take the test too. We disagree a lot on the Authoritarianism-Libertarianism axis (she's in the "if you're not doing anything wrong, there's nothing to worry about" camp) and I wanted to see where the test put her. The results were somewhat as I suspected. 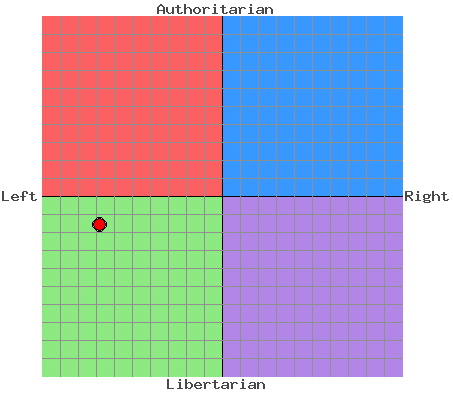 My pinko commie wife. It's interesting how I consider myself extremely leftist and my wife considers herself only moderately so, but the fact that I grew up in the US and she in Europe means that she's actually much further left than I am.

What's really interesting about the polling site is that they give you the results for famous leaders.

It shouldn't surprise anyone that most political leaders are in the first Cartesian quadrant. As your life changes, so do your opinions and you shift in Opinionspaceâ„¢. The more power you have, the more you feel you should be able to exert it (so you shift towards Authoritarianism), and the more money you have the more you feel that it's poor people's own fault they're poor (so you shift towards the economic right).

The folks over at PoliticalCompass.org have also done some analysis of speeches and interviews of the US Presidential candidates and have plotted them as well. Interesting, but not surprising.

So go ahead and take the test. It only takes a couple minutes.