The other day, my wife and I went for a walk around town that put us out by the docks as the tide was coming in. I noticed a really strange streak of light blue water, and we stood there to ponder explanations. The first guess was some sort of warmer current, but it doesn't make immediate sense to me that the reflective tone of the water would change that much with temperature. My second thought was that a fishing boat had gone by and left a contaminate on the surface. The third conclusion that we were happiest with at the time was that it was a matter of depth, that the water was deeper where the color appeared lighter. I took a photo of the phenomenon with my iPhone, geotagged it, and uploaded it to Flickr all before leaving the pier. 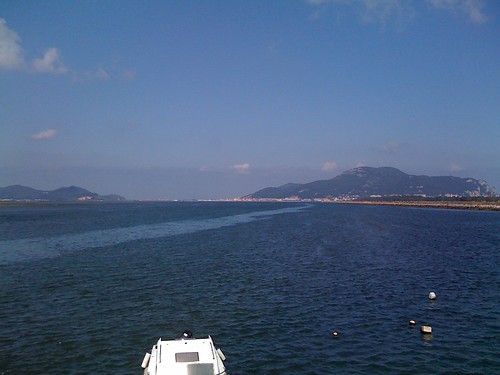 The shot I took of the phenomenon.

When I got home and pulled up the image on Flickr, a Greasemonkey script I have installed in Firefox, called Flickramio, modified Flickr to show a Google Maps satellite representation of where the photo was taken. Because the satellite image was from low tide and the photo was taken looking almost due north, the explanation for the blue streak became obvious.

You can clearly see that the blue streak follows the deeper man-made channel that never completely dries up.

Note that this is correlation and not necessarily causation. This channel will also probably have an effect on temperature and boat paths as well as depth, but I'm inclined to attribute most of the color difference to depth.

Geotagging is really cool, but it's lacking some dimensions that I expect to see added in the next few years. Knowing the latitude and longitude where a photograph was taken is great, but here's what's missing: altitude and direction. Cameras of the future should also be able to encode the altitude above sea level and a three-dimensional unit vector specifying the direction and angle the photo was taken in. With this additional information, it would be possible for computers to perform searches not only of photos taken from a certain place, but of photos taken of a certain place from various distances. Given enough data and clever algorithms, you could eventually end up with 3D models of data-rich locations or the equivalent of Google Street View, all with user-generated uncopyrighted content!

If you are a Flickr user and care at all about geotagging, I highly recommend installing Greasemonkey and Flickramio. The other player on the team that you might not know is an iPhone app called Mobile Fotos that lets you geotag and wirelessly upload 1600x1200 photos from your iPhone to Flickr. I love it.