What does EEUU mean?

When you are studying Spanish, it's not until you get to the stage where you are reading trying to comprehend articles from a Spanish newspaper that you first encounter the bizarre acronym EEUU. It sounds like something you might exclaim when you catch a whiff of a foul odor. The truth is that: EEUU = USA. Let's look at why. 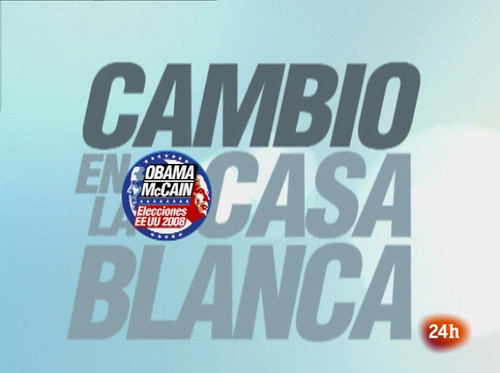 Cambio en la casa blanca. This is the graphic that Radio Televisión Española's 24-hour news channel is using to cover the 2008 US Presidential Election. It means "Change in the White House". At least they got the red and blue colors correct. I'm impressed.

Those wacky Romans came up with a way of pluralizing acronyms by doubling each letter in the acronym. The only place I had ever seen this was in bibliographical references (e.g. "See pp. 43-45" where "pp" means "pages"). But the practice is quite prevalent in Spanish society. When you're studying for your driving license here you have to know that FFCC means ferrocarriles because it appears on signs. No relation to the Steve Earle song (awesome NSFW audio).

Therefore, when Spanish speakers go to abbreviate Estados Unidos, they have to use two E's and two U's, resulting in EEUU. This is not to be confused with the European Union, which, since adjectives follow the nouns they modify in romantic languages, is abbreviated UE.

I have not seen this pluralization technique for acronyms of more than two letters, but there are probably instances out there. Certainly the Romans never planned on some acronyms.