Can Sarah Palin really see Russia from her house?

Any intelligent person knows that Sarah Palin was joking when she said that she could see Russia from her house. It's pure hyperbole. But everyone in the media keeps repeating it over and over, and I'm certain that some people probably actually believe it to be true. I bet that even the people that understand the hyperbole probably don't realize just how much of an exaggeration it really is. So I decided to use my Distance To Horizon Calculator to see just how tall Governor Palin's house would have to be in order to see the Russian coast. First we need to measure how far it is from Sarah Palin's house to the Russian coast. To do this, I have used the Google Maps Distance Calculator. Since Mrs. Palin has two houses, we'll start with the closest one first. 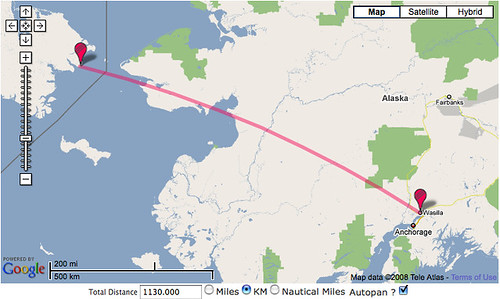 How high above the Earth's surface do you have to be to see a point 1130 km away along the Earth's surface? If we start plugging numbers into my Distance To Horizon Calculator, we see that the answer is 101425.88 meters. You have to go 101 km (63 miles!) above Wasilla before you can see Russia. You can knock 104 meters off of that if you like to account for Wasilla's elevation above sea level.

Just how high is 101 km? This graphic from Wikipedia puts it in perspective very well.

So an astronaut in the Space Shuttle passing directly over Wasilla could definitely see Russia as well, but no one down in the atmosphere that allows aeronautical flight could. 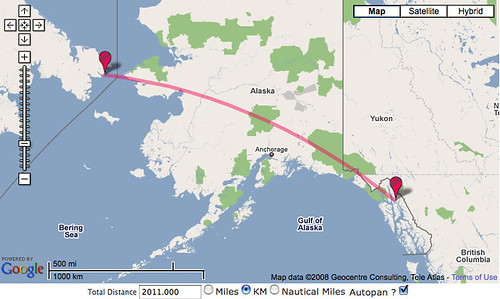 To see Russia from Juneau, you'd have to go up 330,715.1 meters. That's almost the 350 km altitude of the International Space Station.

My point is that, by necessity of both map folding and general human cognitive orientation, we all generally reason about the ground we live on as if it were two dimensional. When discussing line of sight, however, the curvature of the Earth comes into play even at very short distances. The millions of US voters that "sort of know that Alaska is up there to the 'left' of Canada" might actually believe that Palin waves goodnight to the Russians across the water every night. If you know someone like that, send them to this web page.

Disclaimer: these calculations have disregarded topography and the curvature of space-time, both of which would have a negligible effect.