Out On A Ledge

I surprised and impressed myself this weekend. September 20th was the three year anniversary of when we bought our house, making this the house Marga and I have lived in together longest. The biggest reparation that our house has needed since well before we bought it is to sand and varnish the outside window frames. All new houses built around here are built with either PVC or aluminum windows, but our house still has the older wooden windows. Several months ago, we replaced our three worst windows with new aluminum ones, but we decided we couldn't wait any longer to give the remaining wooden windows more protection against the elements. We should have taken before and after pictures, but I didn't think to do so. The difference is amazing.

I wouldn't say that I have a fear of heights. I rather enjoyed looking down from the Empire State Building, for example. But I have had several nightmares that involve precipitous ledges. Not falling, necessarily, but being in a very dangerous place. Part of what make humans such good survivors is the ability to imagine, very vividly, the consequences of actions before deciding which to take. I have a very, very vivid idea of what it would be like to fall from my seventh floor apartment window. I can feel the terror, the wind rushing through my hair, and the realization that these are the last sensations I will ever have. Frankly, it freaks me the hell out. When I lean out the window, I'm always very aware that my center of gravity and a good portion of my mass is clearly inside the house. As soon as there is any doubt, I'm all the way back in.

So when it came time to paint the panels above the window frames this weekend, it really sucked being the tallest family member. My father-in-law had brought a harness and some rope, without which, there would be no attempting this feat at all. I must admit that it got easier every time I had to go out there (4 coats x 2 windows = 8 times). That cliché about not looking down is 100% true. When I was standing there, focusing on the panel I was painting, things were okay. But bending down to get more paint on my brush and seeing a tiny little car drive by below was not so okay. And once it was particularly windy which was pretty nerve-racking as well.

Naturally I had Marga take some photographs to show off my bravery. 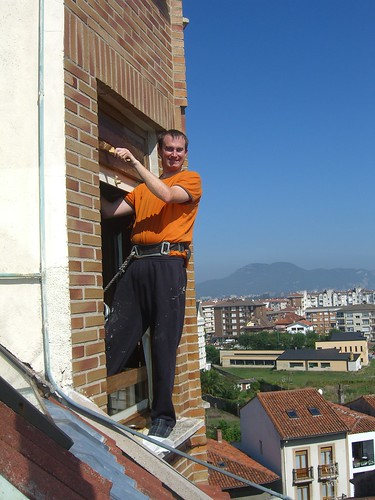 You'll notice that one hand is always clearly inside the window holding on. The only exception was for putting up the masking tape. 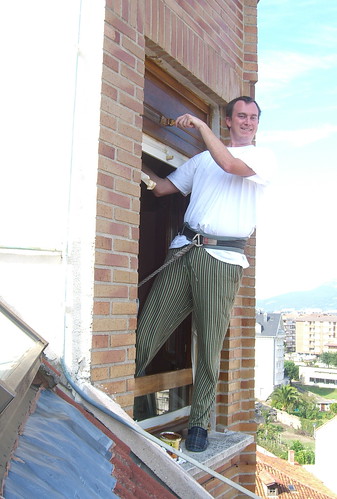 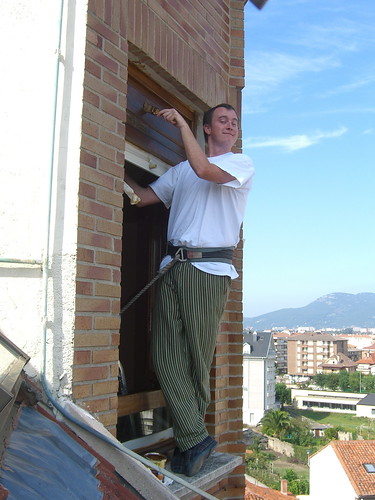 Showing off slightly with both feet outside. 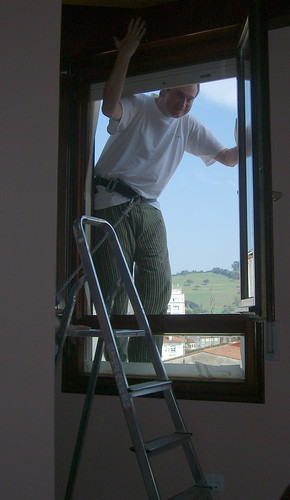 Come on out! The weather's fine! 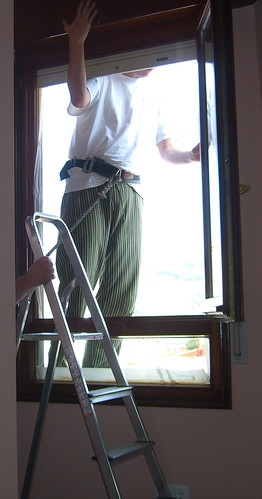 On the outside of my seventh floor apartment. The rope was tied very securely to a support column that runs through our living room. What I didn't expect was just how psychologically comforting it was to have my father-in-law holding the rope and applying just the tiniest bit of tug, so I always had the sensation of being tightly attached to the building. 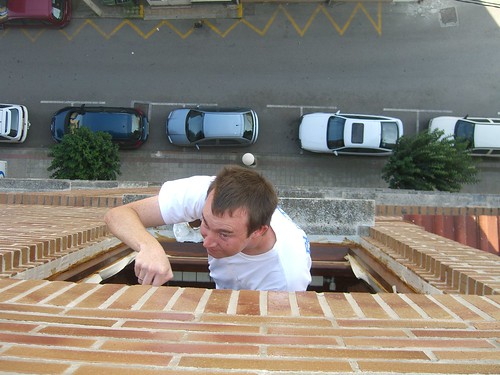 From the window above. We did this window, too, but it doesn't have that panel, so it could be done from complete safety inside. 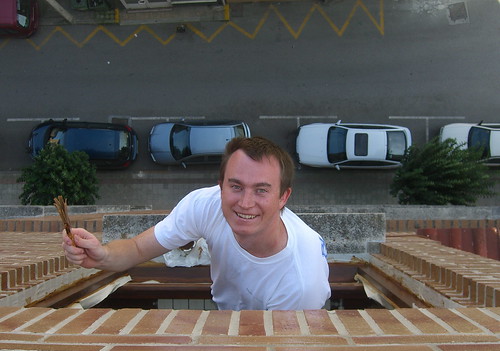 Looking up isn't a great idea either. You can see how wide the window ledge is. I still get a little dizzy looking at this photo.

I've never been very interested in hobbies like skydiving, scuba diving, mountain climbing, or hang gliding. My basic rule on hobbies is to not do things where the primary objective of the hobby is not to die. This kind of thing is not thrilling or exciting to me. I don't understand roller coasters. Why would I want to trick my brain into thinking I'm in mortal danger? No thank you.

The stress of being out there on the ledge is very tiring. Once I stopped imagining my own gravity and pavement-related death, I slept really well last night.