My calendar has three days this week (Wednesday, Friday, and Saturday) marked témporas. There don't seem to be any pages on the internet about témporas in English, so I thought I'd make one.

My father-in-law tried to explain them to me recently. He explained that, he already knew that August wouldn't be very warm this year because he'd observed the weather during Easter. What?? He explained that everyone knew that the weather during Easter affects the weather for the rest of the year. I said, "But you don't really believe that, right?" He said, "Sure, the shepherds and farmers have been using that wisdom for centuries!" I was just a liiiittle bit skeptical. 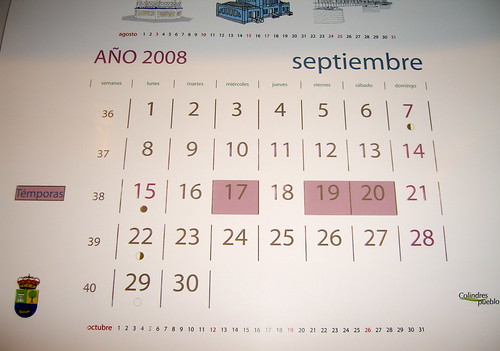 Témporas are the days right around a change of seasons, and, legend has it, one can observe the weather on these days and forecast the weather for the entire season. Here's a translation of one of the only websites I've found about it:

There's an extended tradition from many years ago about Las Témporas, their changing dates, their origins, their climatological incidence, especially in four periods of the year, and their veracity or not. The following and loyalty of many people to the outcome or approximation of meteorology that will predominantly occur during the months that follow one témpora until the next.

The témporas are on four times and days of the year. The days are Wednesdays, Fridays, and Saturdays. The first témporas of the year are in the first week of Lent, on the 40th, 38th, and 37th days before Easter Sunday. [Ash Wednesday and the following Friday and Saturday.] The second témporas are the 53rd, 55th, and 56th days after Easter Sunday. The third and fourth témporas are similar. Since Advent begins on the first Sunday after the 26th of November and has four Sundays, the témporas correspond to the third and fourth Sunday, in other words, in December, it oscillates between the 14th, 16th, and 17th and the 20th, 22nd, and 23rd, and in September it's the same days as December, except whenever Wednesday is the 14th, since you get close to the Festival of the Exaltation of Santa Cruz, the 14th is incompatible with fasting and penitence témpora ceremonies. In other words, whenever September 14th, 16th, and 17th are Wednesday, Friday, and Saturday, the témporas must be moved to the next week and are the 21st, 23rd, and 24th. And one must remember that Holy Week must be a full moon.

No, the Spanish version isn't worded much better. The gist is that there are sets of three days right around the season change that are special somehow. It would make sense if they corresponded exactly with the solstices and equinoxes, but no, they have been warped to fit in with the long history of Catholic tradition.

So what can they tell us about the weather? Let's look at an excerpt from Témporas and Prognostications: A Living Tradition in Cantabria, from the January 2004 edition of Popular Meteorology: (the bold is mine)

As for the relationship that témpora dates may have with dominant atmospheric weather conditions during a specific season, there are no known documented studies that support the claims. It's simply a tradition that has persisted for centuries. There are many people that are advocates of the long-lasting axiom â€“ whatever it is â€“ it's the logic consequence of the témporas being "like this"... The fans make such predictions, acquire traditional calendars that publish the variable dates of these charismatic days. Then, they observe the weather â€“ especially the direction of the wind â€“ on the témpora dates that the almanac indicates.

Curiously, this prediction has made furtunes and for centuries the weather in the region has been justified, depending on how the wind was during the last témpora days. The collective memory of the people has established this prognostication, although, paradoxically, those who ratify such a thing are normally unaware of the exact dates of the témporas they just cited and are limited to repeating something that they heard somewhere, and they retell it, as a topic, without any further understanding of the cause. There are scarce exceptions, like those who make the position of the stars in equinoxes and solstices the dates of the témporas and consider that the dominant weather for those days of season change are premonitory of what will happen during the corresponding spring, summer, autmn, or winter of each year.

There is a lot of wisdom wrapped up in cultural traditions and beliefs. The problem is that, for every tiny nugget of wisdom, there is a gigantic boulder of bullshit. Particularly when it comes to predictions, the human mind is absolutely terrible at reasoning logically about causal relationships. This theory of témporas absolutely reeks of confirmation bias: only the instances that confirm the hypothesis are remembered and all others are forgotten.

In the US, we have Groundhog(Imbolc-Candlemas) Day which is similar and (hey, what do you know!) falls almost exactly on a témpora, but no one actually believes the way the sunlight travels around a woodchuck has any bearing on climate.

In my research for this, I came across Cabañuelas, which is the version of the Témpora myth as it got twisted on its way to South America. Cabañuelas believers claim that the weather during the first 24 days of August dictate the weather for the rest of the year, with each day assigned to either the beginning or the ending of a month. The designers cleverly assigned August 1st and August 24th to predict the weather at the beginning and ending of August each year. Gosh, I wonder how often that's true!?

A side note: Another example of confirmation bias nonsense I heard recently between housewives at the grocery store. They had all heard it said, but had no idea if it was true, that "premature babies born after only seven months in the womb have a better chance of survival than those born after eight months." Everyone agreed that it didn't make much sense, but that, if everyone had heard it said, that it must be true. Wow.

Judging from Wednesday, Friday and today, it's gonna be a nice warm, cool, sunny and rainy autumn!