Marga has been very, very sick lately. We didn't go out at night at all during our August vacations. We haven't been to our normal weekly salsa dancing outings since early July. She's had zero appetite and has been forcing herself to eat a bare minimum to survive. As a result, she's lost several kilograms in the last few months. She has no desire to do anything other than sleep or sit on the sofa staring blankly at the television, but, like with eating, she forces herself into some physical activity, like going for walks with me in the evenings. If I didn't know what was wrong with her, I'd think she was terminally ill. That's how bad the past two months have been.

It's kind of amazing that all of you know what the above picture implies. No words necessary. It is literally one single bit of information. A binary 1 instead of a 0.

The expected arrival time is very late March, 2009, trying desperately to avoid April Fools Day. I had no idea that the "nine months" figure bandied about is really so vague. The due date is calculated from the time of last menstruation rather than conception. I guess it kind of makes sense that things fall into place with the lunar rhythm of things, but I'd never really thought about it.

Just when we had gotten over the shock of the whole thing, we went for the first ultrasound yesterday morning. So far, my life hasn't really changed that much. My wife has been ill and a little more bossy than usual, but we haven't purchased anything in preparation or anything. But seeing a doctor put a wand inside Marga and a little human appear on the screen was absolutely mind blowing!!! Ultrasound pictures are really, really terrible, but this was the first time I've seen the live video, and it was amazing! It's just like when you see eight dots representing the orthographic projection of the vertices of a cube, they look like only eight dots, but when they are animated to rotate the cube, your brain immediately understands that you're looking at a three dimensional object. Ultrasounds are the same. Not being on my back on the table, I got a much better view of the monitor than Marga did. As the obstetrician changed the depth of focus, it became very, very clear that my wife has a little tiny human inside her. This made the whole thing VERY much more real for me.

The little critter has a very clearly defined spinal cord, only one head, two arms, two legs, and just the right number of fingers to facilitate the understanding of our society's arbitrary base-ten numbering system. It's got a very strong heartbeat, which we heard and could visually see. It's the appropriate size for this stage of development, which is 5 cm from head to toe. That's two inches for you metrically challenged. I saw a little something between its legs, but the obstetrician said nothing of sex, so I'm guessing that sexual organs aren't yet developed and I was seeing the vestigial tail. In short, the little parasite making Marga (and me, by proxy) miserable is definitely humanoid and seems completely healthy.

The ultrasound machine generated two little Polaroid-sized printouts that I have scanned. Very blurry. I've turned them on their side so that the human features are more easily recognizable. 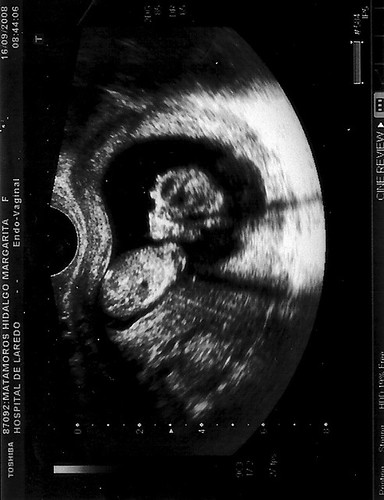 The profile shot. Keep in mind that we're only seeing a cross-section. A cross-section of your profile that included all of your nose wouldn't show any arms or legs either. Definitely creepy cartoon-like eye thing near the nose. It's already got more of a chin than I do. 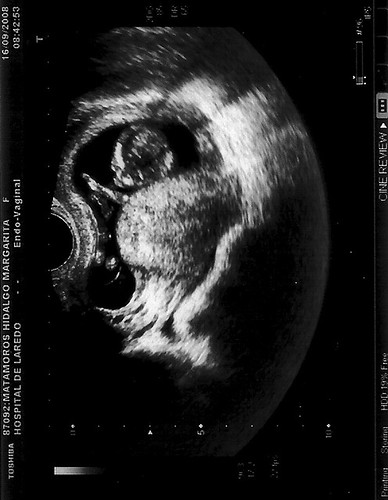 Arms and legs visible. One thing I noticed was that it's awfully cramped in there.

And so there you have it. The countdown to fatherhood has begun... Tick. Tock.