Marga's cousin, Andoni, got married on September 6, 2008. It was interesting to watch because it was so similar to our own wedding. The bride is from France, so there were a bunch of French people attending that didn't speak Spanish. The church and restaurant were both places that Marga and I had, to use a recently popular word, vetted before making our final choice. They did some things differently than we would have, but they're very different people. All in all, it was a very nice day that turned out well. I had to decide where to place my wedding behavior on the scale from "guy with a 2-megapixel mobile phone" to "professional wedding photographer with expensive camera and tripod". In the end, I decided to dial it all the way back to iPhone photography only and do more participating than observing. 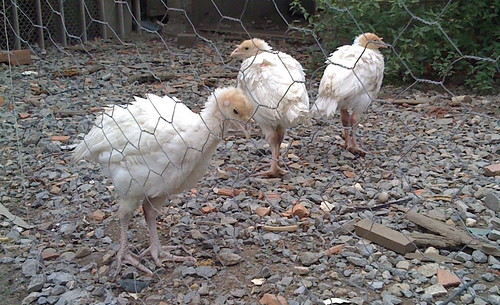 The bridesmaids. No, just kidding. On the morning of the wedding, I went with Juan to visit his chickens and his three new baby turkeys. Hey, what are baby turkeys called? Chicks? Turklets? Goblets? 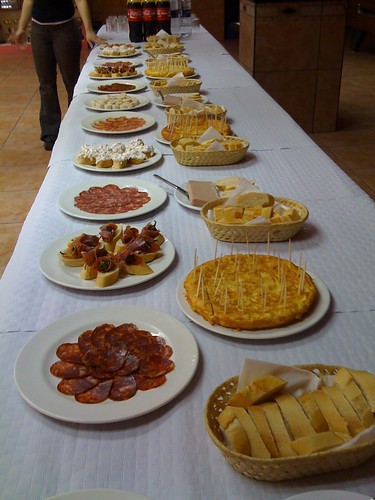 Tapa heaven. We had to stare at this for two hours before the French people arrived. Torture! 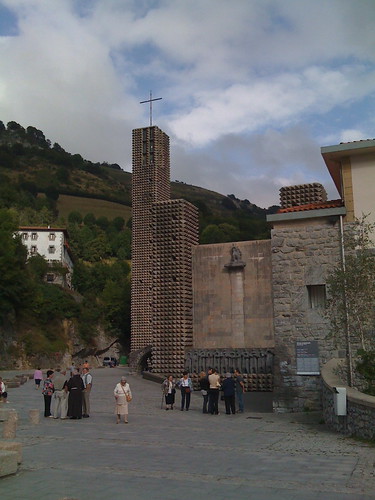 The church at Arantzazu (a-RON-thah-thew) is somewhat more special (for some Catholic hierarchy reasons that no one could explain to me) than your average town church. I'm not sure in what decade it was thought that the sound studio pyramid facade was a good idea. The church is quite ugly, really. But it's perched on a lovely mountainside with nice valley views. 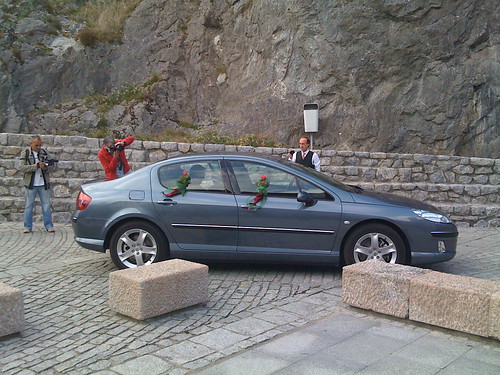 The groom arrives. His brother and cousin had driven up there that morning and placed menacing signs along the road saying encouraging things like, "Well, so much for liberty!", "Turn back now!", and "It's too late, you're at the church!" Good to have such fraternal support. 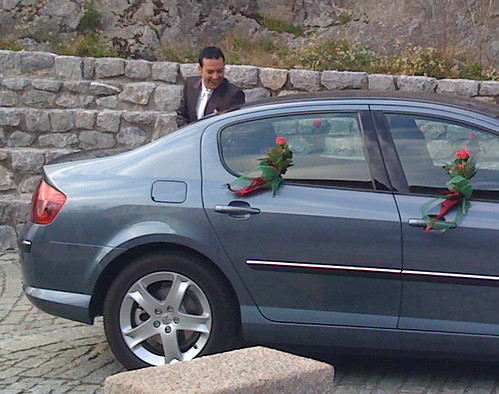 Andoni is always bubbling with charisma, so he did the groom role very well. 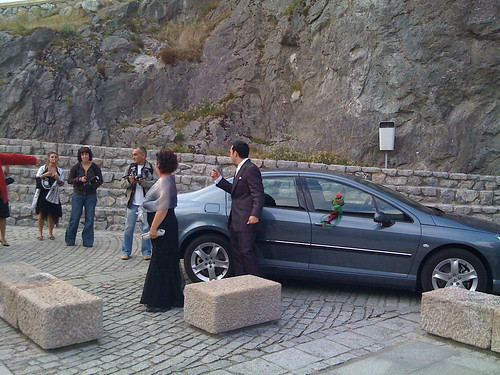 He opened the door for his mother. 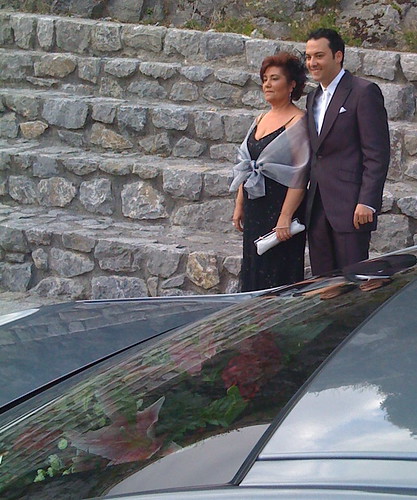 I didn't mean to get the cool reflection off the car window here.

By the time the bride arrived in a white limousine, I was tired of taking phone photos and I couldn't get close enough anyway with all the pushing and shoving to get camera position. 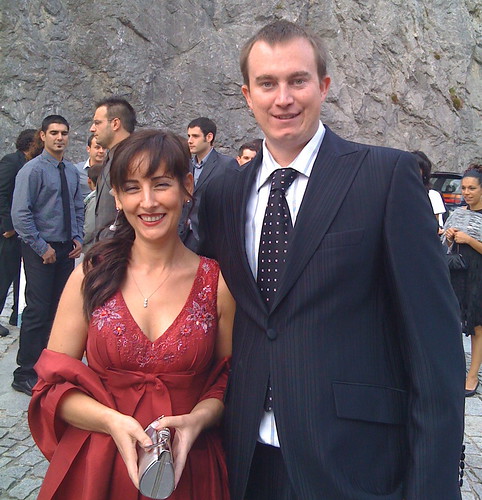 Looking good. My wife, mainly, but it's good to get some use out of my wedding suit. 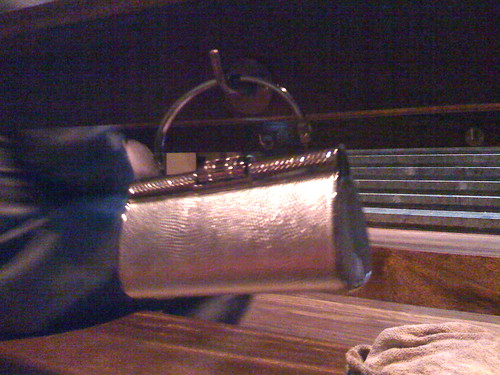 Nothing says "wedding" like a stylish too-small-to-be-very-useful handbag hanging on a church pew. 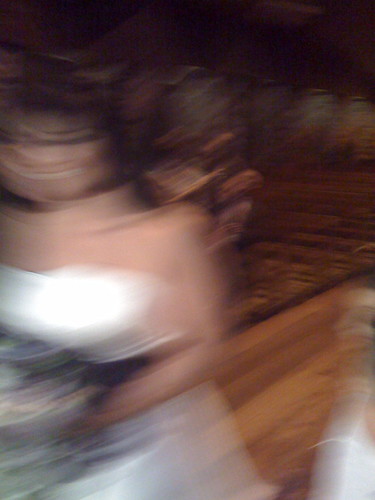 Actually, this is about how I remember my wedding. 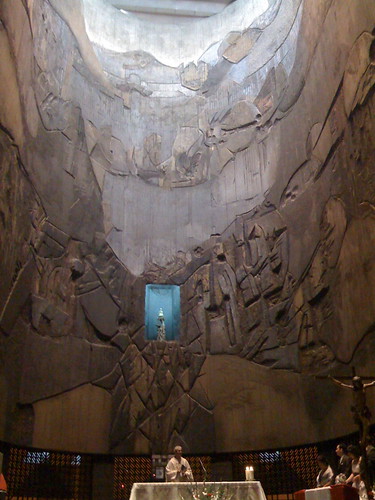 One thing they did have that would have been nice at our wedding was a bilingual priest. So the service was half in Spanish and half in French. Actually our priest was bilingual; we had to specifically ask him to refrain from using Basque during our service. There was one exciting arm-flailing moment during the service when the priest nearly fell off his platform. 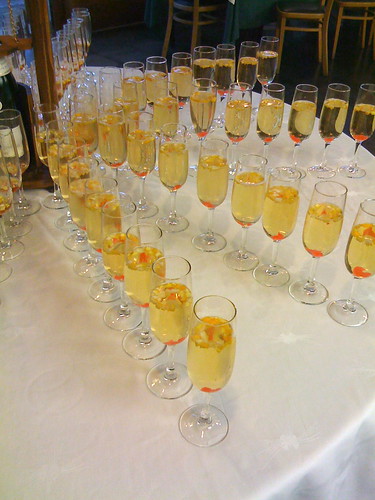 At the restaurant waiting for the champagne cocktail. All the champagne glasses had chopped up lemon and orange rind floating in them. Stylish and pleasant to the eye, but disgusting to consume. Sipping champagne at an elegant wedding is not the time to be spitting out bitter fruit parts. 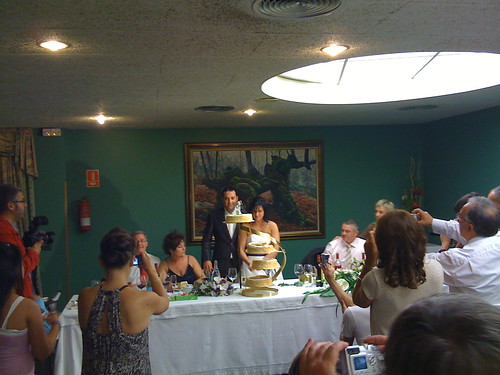 When I asked Marga which restaurant they had chosen, she said, "You know, that one with the horrible, horrible painting." I hadn't noticed the painting when we reviewed this place, but I was aware that it had been struck off the list because of Marga's recollection of the painting. Upon seeing it again, we decided it wasn't that horrible, but we still preferred our wedding location. 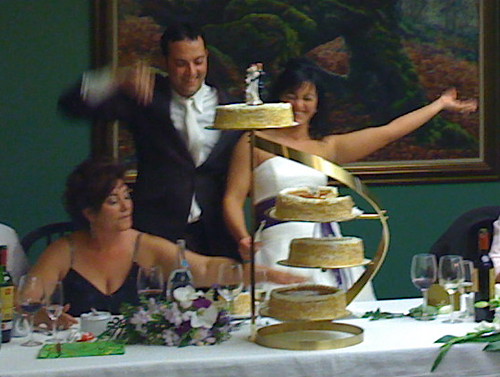 This bride and groom were better showmen than we were, that's for sure. 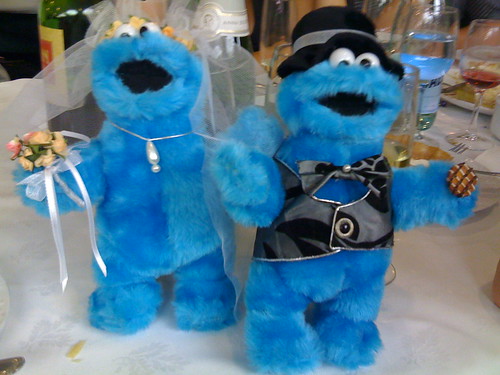 A gift to Andoni's brother, Maikel and his girlfriend. In Spanish weddings, it's a tradition to give wedding gifts to couples who might be the next to marry. We gave Andoni and Laure octopuses at our wedding.