My lovely wife walks by this apple tree twice every day on her way to work. I've walked by it with her during evening walks as well. It's frustrating because the apples are so ripe and perfect-looking, but we can't reach them. She could get her hand through the chain link fence, but the apple could not. Personally, I have no moral qualms against taking fruit from someone else's property as long as the owner isn't harvesting it. Stealing prickly pears? Fine. Stealing carrots from Mr. McGregor's garden? Not so fine. I'm fascinated by the human psychological processes I see happening in both my wife and myself with relation to these apples. That fence makes them so much more frustratingly desirable. The Forbidden Fruit metaphor, which, in this case, isn't all that metaphoric, perfectly describes this aspect of human psychology. And how telling is it that the metaphor for the universal object of desire is the dietary staple of all primates? I think of the telling and retelling of the Garden of Eden myth for thousands of years, every so often being slightly modified and improved until the concept of desiring the forbidden was perfectly captured. Dawkins really hit the nail on the head claiming direct parallels between gene and meme evolution. Like all revolutionary ideas, it seems so obvious now. 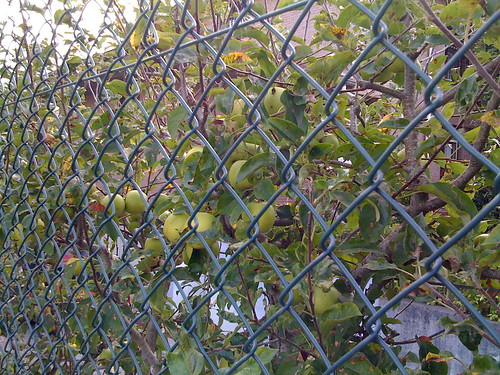 Some simple fencing was all the Garden of Eden needed.