Crowds gasped as they looked skyward. Many ran for their lives, while others couldn't look away. As the leading anglo-photojournalist in Colindres, I bravely ran for my camera. The glowing orbs hung there in the sky, quivering slightly, as if they were watching us. Then, as quickly as they had appeared, they vanished. 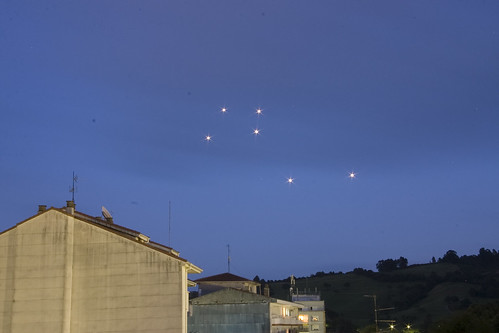 Speculation commenced immediately. Alien spacecraft? Military aircraft cloaking? Spirits of the dead? Why the 4-2 formation? Was someone trying to communicate the answer to life, the universe, and everything? 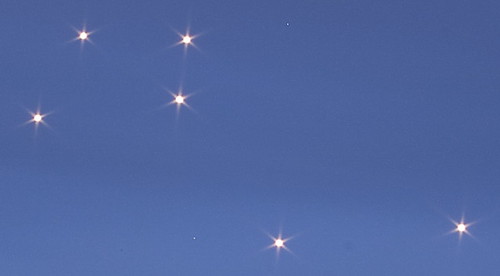 Let's see who can figure out what this is a photograph of. As with most UFO stories, you should ignore the hyperbole of eyewitness testimony (i.e. the first paragraph of this post). All of the following is true:

Submit your guesses in the comments. I will tell you the answer in a couple days.

It seems that only one person (a commenter on Flickr who chastised me for making an amateur UFO-faker mistake) thought to look at the EXIF data for the image to discover that the length of the exposure was 7 minutes and 45 seconds. These were cohetes, firecrackers on rockets that make really loud booms, used in Spain to announce the beginning and end of festivals. It's a pretty efficient way to convey one bit of information to the entire population of a small town. They are also typically used to announce the beginning and end of a bullrun (it's important for everyone to know when the bulls are safely out of the streets). The sky was completely dark, and they made a cool spark trail as they zoomed into the sky. After they fired the first one, I ran to set up my camera, hoping to catch the spark trail and the explosion with a long exposure. I waited until they had fired off six more and let the shutter close. I was disappointed to see that the spark trails had been lost, but that I had six perfect orbs apparently floating in a cloudy sky.