On Tuesday of this past week, we went to a free concert on Laredo's beach. The main act was El Arrebato. The name of the band means ecstasy or rapture. Indeed.

The opening act was a band called Mario San Miguel. The lead singer was quite entertaining, making jokes, etc. They did this elaborate setup for the first song, with the backs of the guitarist, bassist, and singer to the audience, with each turning around with style, but then the audience informed them that the sound wasn't on for the vocalist and guitar, so they had to do it all over again. They told us, "Okay, please forget what you just saw. We're going to do it right this time!" While they seemed a little amateur like this, they were very friendly and lovable. I've already attempted to find some of their music online, but with no luck so far.

The main act, headed by a character named Javier Labandón, is absolutely amazing. They might be my Spanish favorite band, with the possible exception of the Gipsy Kings (who a friend, Nystrom, offered to go see with me one time in the US, and I didn't go because I had never heard of them). This is the third time I have seen El Arrebato in concert. The first time was in Extremadura, when I had never heard of them. And the second time was near home in Cantabria two years ago, which I blogged. The lead singer is absolutely amazing. As they say here, llena el escenario (he fills the stage). Being an entertaining singer without an instrument is hard work, but this guy has so much charisma, it's unbelievable. For this concert, we knew to arrive a little early and place ourselves within a few meters of the barrier in front of the stage. We waited a good 45 minutes before the first act, through 90 minutes of the first act, and then another 45 minutes until El Arrebato appeared. The lead singer is notoriously late for his performances, and I doubt he would have arrived any earlier if he hadn't had a previous act, so it was nice to be entertained for 90 of the minutes we would have to wait. Seriously, he's that tardy.

It was fun to watch all the people with mobile phones and point-and-shoot cameras attempt to take photos of the people on stage and fail miserably. That's when I pulled out my expensive Canon 40D and took some crystal-clear photos. Non-DSLR chumps...

If you lose interest with these photos, scroll down to the video at the end. 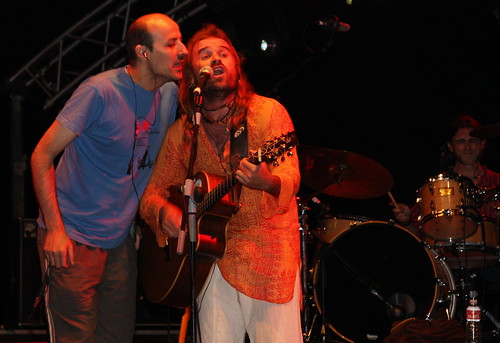 Mario San Miguel. The bald guy was a keyboardist that only sang on this one song. The scruffy hippy guy was the main singer and character of the band. 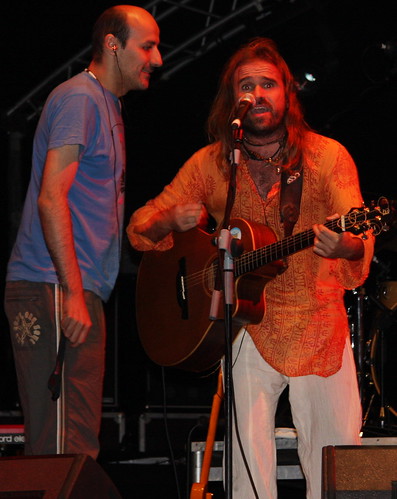 Some people just look out of place without a joint in their hands.

Just to be a troublemaker, for the last few songs, he put on a Santander (the local professional football team) jersey, because there's a game coming up against Seville, the city El Arrebato is from.

The banner on the side of the stage. It says, "Hoy todo me va a salir bien." (Today everything's going to turn out alright for me.) That's one aspect of the singer's personality: everything is happiness. Even his sad "lost love" songs end with a "but I'm going to recover and be alright" note. He's almost always smiling, which is a large aspect of charisma, it turns out. 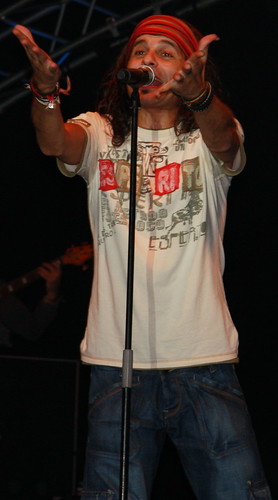 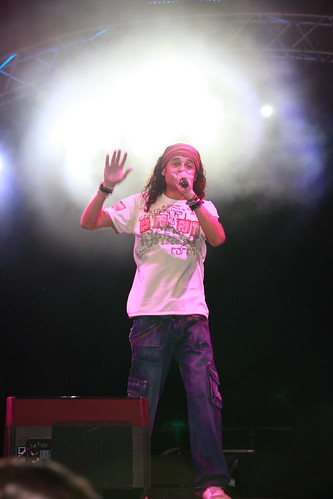 In his soliloquies, he often referred to the town he was in as Laredu, but I've since been informed that that could just be an Andalusian accent thing, rather than a "you didn't learn the name of the town you were performing in!" thing. 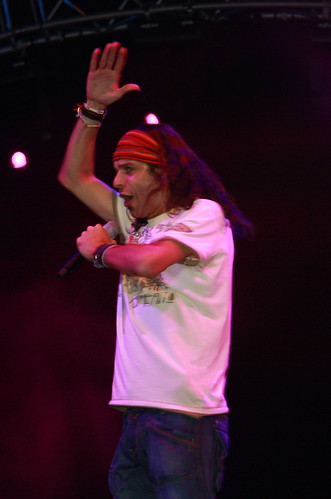 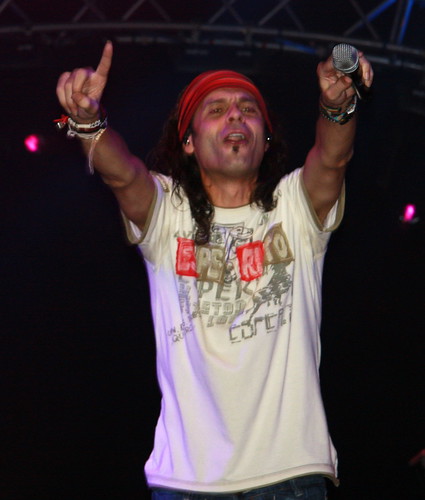 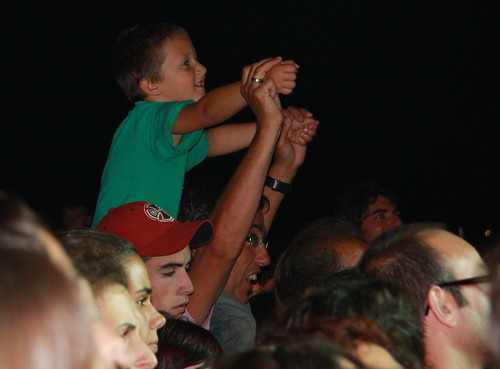 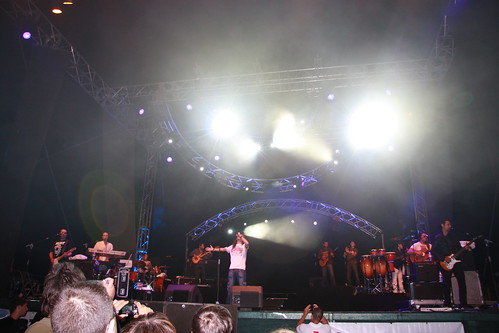 The full band on stage. They left Javier a pretty wide area to run around in. 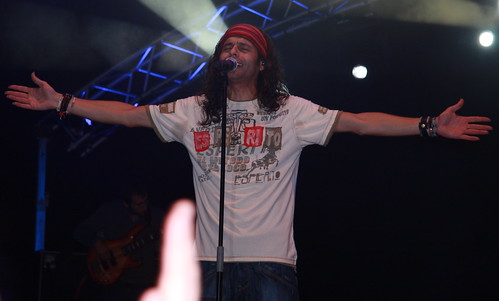 He spent a lot of time Jesusing. 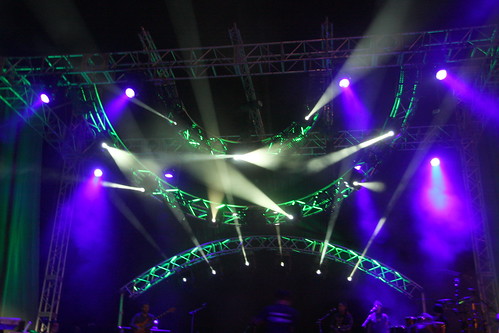 They had a pretty impressive light show. 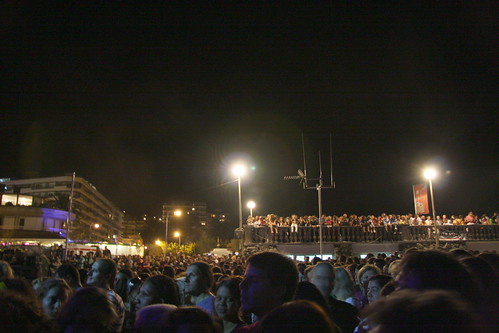 There were people as far as I could see. The people pressed up against the beach walkway barrier were there as long as we were. It was as close as you could get without stepping in the sand.

When the concert was over, I was standing several inches shorter, having dug foot-sized holes that Tiger Woods would have been proud of where I had been the whole time in the sand. 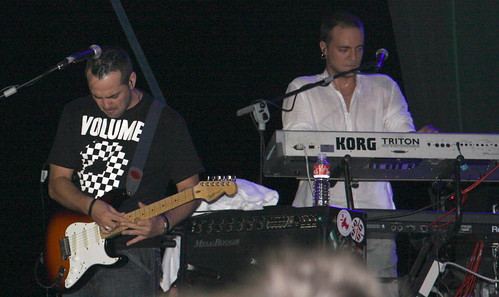 Every one of the musicians in the band is of the highest caliber. This is the lead guitarist showing off some mad tapping skills. 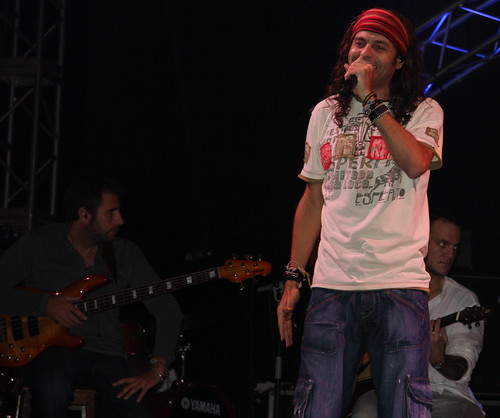 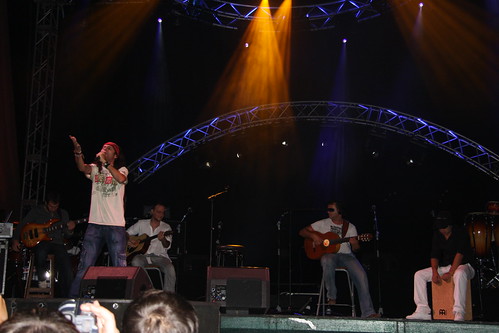 Every concert, they do a little campfire flamenco section where all the musicians form a semicircle to sing acoustic flamenco style. It's superb. 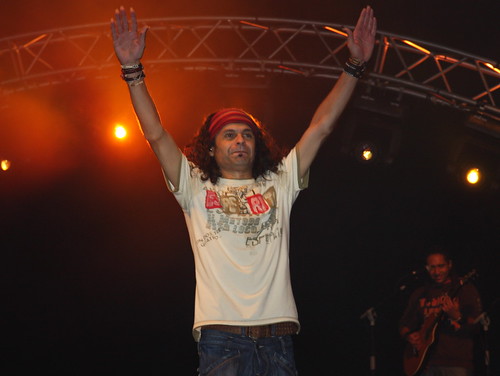 Check out the fingernails on this guy. He never plays guitar in concert, but he's definitely got flamenco guitar nails, so he must play.

I apologize for so many photos of this guy, but he's so mesmerizing that every few minutes you're sure that he's doing something worth capturing. 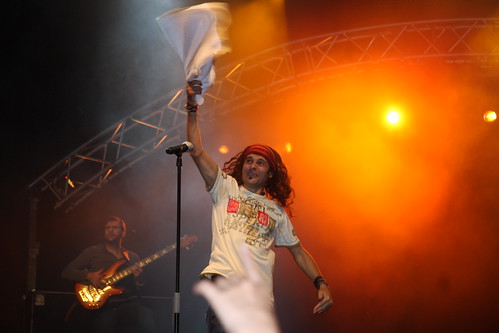 Twirling around the towel he had been drying his face with. 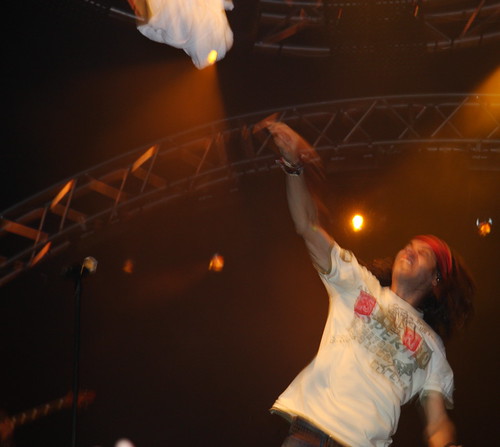 When he finally threw it to the crowd, he left behind a huge cloud of sweat droplets that I happened to capture in this photograph. 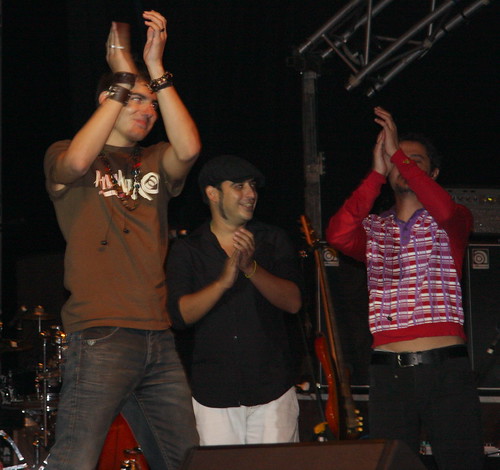 This guy in brown is a cousin of the lead singer. My sister-in-law, Belén, thought he was pretty cute. 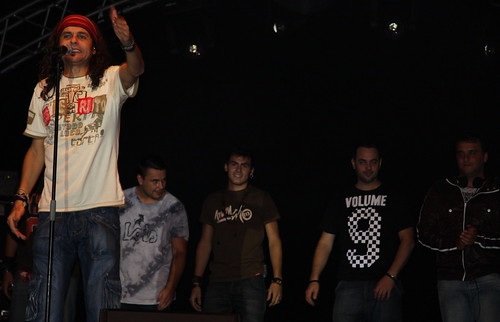 Okay, so he's kind of a cutie.

A little spin before the final bow. 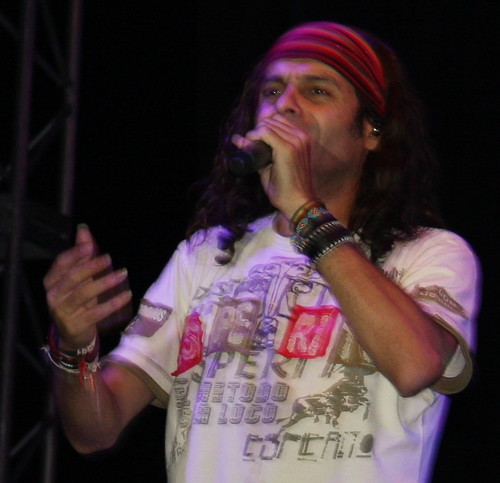 An encore? How odd! That almost never happens at any concert! 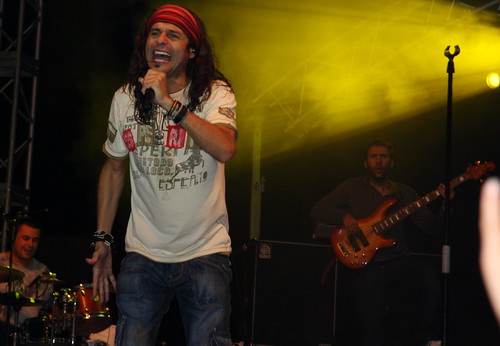 Below is a six-minute video of various songs during the concert. Even for those of you that don't understand Spanish, you should still watch to check out just how much stage charisma this fellow has. He even fills the stage when he's sitting on a stool! Incredible! The music was a little too loud for my microphone, and there was even some noticeable clipping with my naked ears. Too loud! I never remember to take ear plugs to these things.

This concert was almost exactly on the anniversary of the death of Antonio Puerta, a young soccer player for Seville. El Arrebato is the singer of the official theme song for the Seville soccer team, so, when someone held up a Puerta jersey, he had to sing the official hymn. I dedicate this video to my expat blog sister, Sarita, who recently separated from her husband.