2008 was my sixth year going to Extremadura in August. One tradition that happens every year down there is picking higos chumbos (prickly pears). I used to think they were called higos chungos, which would mean "terrible figs" (chumbo doesn't mean anything outside of American Spanish colloquialisms). According to Wikipedia, this particular species, Opuntia ficus-indica, is native to Mexico and was introduced to Europe and the rest of the world by humans.

Officially, the cactus plants we harvest them from are on someone else's land, but the owners don't seem to do any prickly pear picking themselves. But we add a shifty-eyed clandestine atmosphere to our harvesting expeditions to make them more exciting. e.g. "Here comes someone walking their dog! Hide the metal tongs in the bucket and pretend like we're just out for a stroll!" Fun. 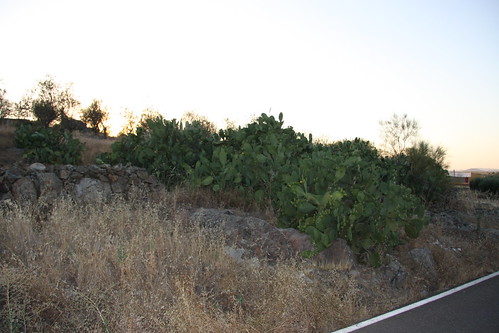 The cactus is right on the side of the road. 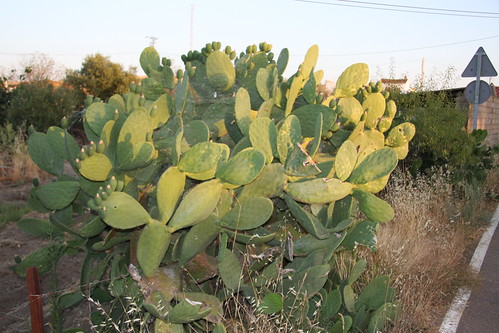 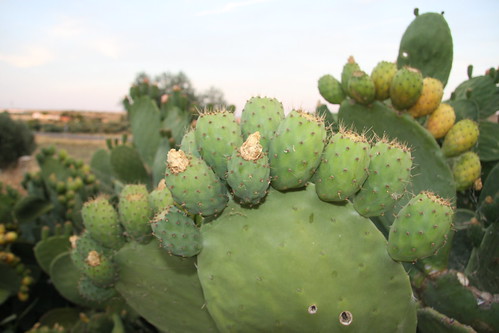 These in the foreground are still green (both meanings, and maybe envious too). The yellow ones in the background are ripe for picking. 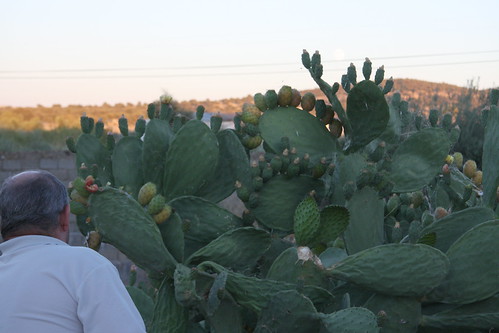 Juan reaches in carefully with the long metal barbecue tongs.

On the way back home, we dump them into a grassy field and use a tree branch to roll them around in the grass, thus removing almost all of the needle-like spines.

There's a little poem for remembering how to peel them:

God save you, prickly pear... I cut your crown and your butt, I slice you in your belly... and I send you to another world.

If there's one thing I've learned in Spain, it's that there's an awful lot of wisdom passed between generations via rhyming lyrics. 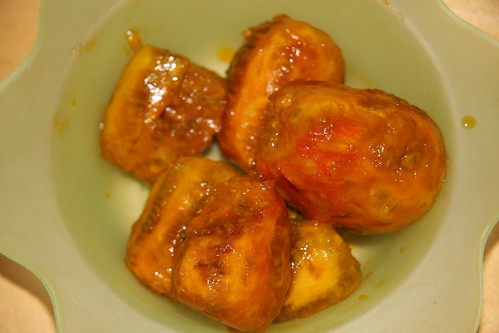 This is what they look like peeled and ready to eat. They are extremely sweet and wonderful, but they are full of peppercorn-sized seeds that must be swallowed whole, which takes some getting used to.

There is something great, metaphorically, about a fruit that is so harsh and defensive and hurtful on the outside, but so wonderfully sweet, tender and delightful on the inside.