Several days of my summer vacation in Extremadura were spent tackling the huge mess that was my wife's grandfather's attic: a lifetime of "this could be useful later!" items and the dust they have collected over the years. I learned the trick of splashing some water on the floor before sweeping to avoid being suffocated by airborne particulates. Very handy.

We ended up throwing away almost everything in the attic. The first two days, we just moved it all to one side of the attic, and then we finally moved it down outside to be discarded the next morning. 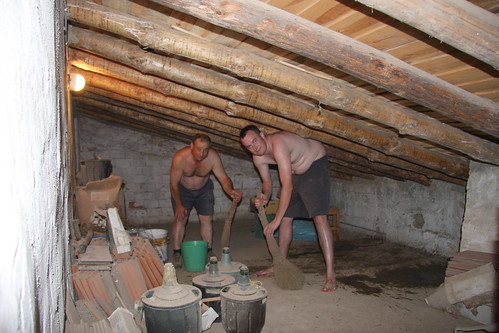 This is quite possibly the worst angle and posture I could be photographed in. One thing about summer in Extremadura is that it's too bloody hot to be embarrassed about your body's imperfections. I considered performing some Photosuction liposhopping before posting, but what the heck.

The word for attic in Spanish is doblado, which means "doubled". I asked Marga, "Why is it called a doblado? Is it because it's the second layer on the house?""No," she said, "it's because when you're up there, you have to be doubled over all the time." Duh.

Juan and I installed the light you see in this picture, a process involving running a cord up the stairwell, installing a switch on the wall, and screwing the light fixture to the cement wall. The thing about installing a light is that, well, it's dark. Several times we remarked that it'd be nice if there was a light up there so we could see what we were doing.

These aren't the brooms we used to do the entire attic job; we had just uncovered these and posed with them. And the majority of the attic actually allows one to stand up straight. Those are wine jugs in the foreground. They survived the purge, but I doubt they'll ever be used again. Also notice the tree-trunk timbers. Nice. 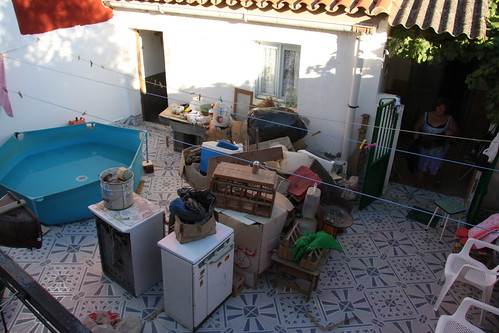 All the crap filling the corral (the open area between two parts of the house). That pool is about 27 years old. Marga has spent several thousand hours in that thing. 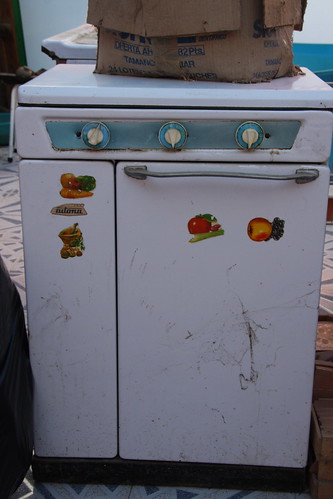 The old stove. The base was hollow so an orange butane tank could be inserted. I remember when Marga first came to visit me in the States, I was bragging to her about having a gas stove! If she'd spoken colloquial English at that time, her response would have been, "Dude! That's all we have in Spain!!!" Of course, now, all the new stoves in Spain are switching away from gas to easy-to-clean ceramic. 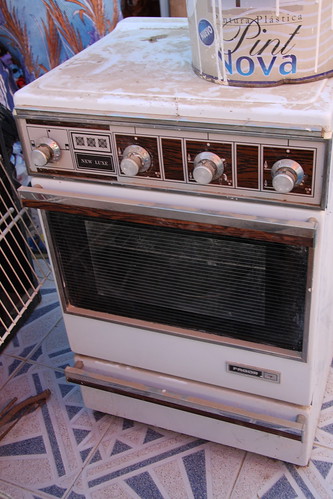 Old oven. You gotta wonder how someone could apply the "it might come in handy again some day" reasoning to something like this. 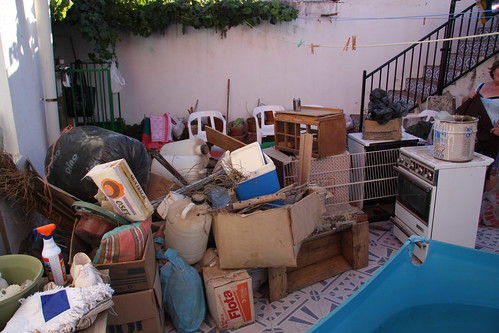 The problem with having this stuff here was that people kept looking at it out of boredom and finding things that they might want to keep. Argh! 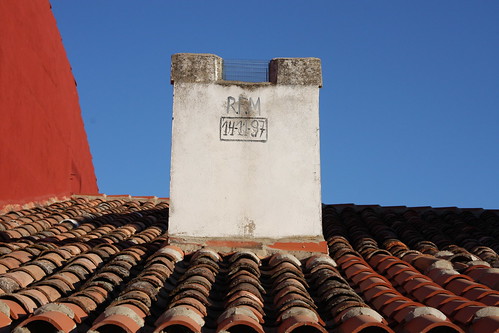 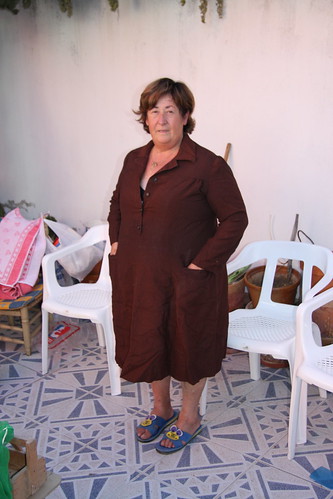 Apparently Marce's mother was one of those Spanish women that always wore a brown or black dress. Some elderly señoras like that still exist. Marce found one of her mother's old dresses and couldn't resist trying it on. But only for a second so that her father didn't see her (because he might have been saddened by the reminder of his late wife). 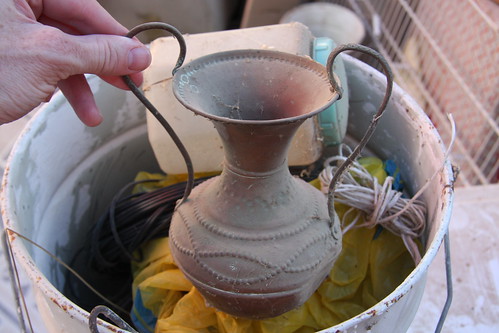 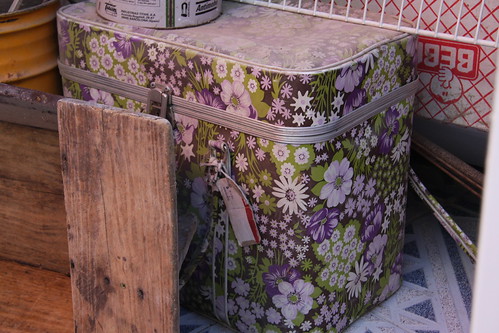 This is an old cooler. What a disgusting floral pattern. Way to make a cooler lamer. 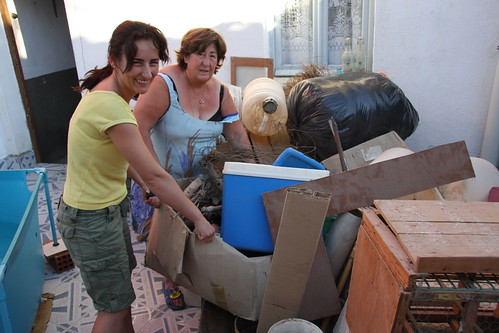 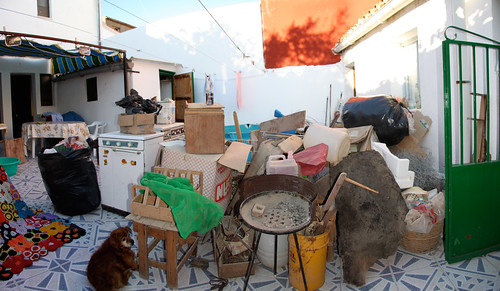 A stitched wide-angle panorama of the junk in the corral.

The next morning, we all got up at 6:30 to be ready for when the guy with the trailer was going to come at 7:00. I had the incredibly brilliant idea to set up my camera to capture a timelapse video of us moving all the junk out of the house. Even more clever still, was my idea to set the camera for exposures of one second, to capture the blur of the movers. At 6:50, I started the camera snapping photographs, perfectly aligned to capture all the items to be removed and look down the hallway all the way to the front door.

We waited. And waited. And waited. At 8:00 we walked across the street to ask for the phone number of the guy coming with the trailer (he's a relative of theirs or something). We called him and his wife answered and told us that he was in bed, fast asleep. When he finally got there at 8:30, there was way too much daylight for one-second exposures, and the timelapse video was ruined. Dammit dammit dammit. In retrospect, I should have set it on "no flash auto", which would have taken longer exposures when it was dark and shorter when it was light. Now I know.See in HD on Vimeo. Or on YouTube, Metacafe, Google, DailyMotion, Blip.tv, Stupid Videos, Viddler or 5min.