Whenever we go south to Extremadura, we always bring back liters upon liters of extra virgin olive oil and wine. I don't actually have any photos of the place where I bought the wine I brought back, but I do have a good anecdote.

We traveled to the nearby town of Esparragosa de la Serena. The name is related to asparagus plants. Apparently the place we've bought wine in the past is no longer there, so we had to just park in the middle of the town and ask someone. At twelve noon, it was already pretty hot and the streets of the small town were deserted. Finally we found a gentleman sitting in his doorway. We asked him, "Excuse me, we're looking to buy some wine. Can you direct us to someone that has wine to sell?" The man said, "No." We continued to ask him, "No really, surely you know someone around here. We really want to buy some wine." After a minute or two of this, the man stood up and said, "Hold on, I'll bring out some of the stuff that I'm selling this year." What? The same man that gave us a cold no had some wine he was wanting to convert to money! The wine he brought out was pretty nasty. It was cloudy and tasted very watery. But just one sip went to your head. Definitely not what we wanted. When we turned that wine down, the man went back into his house and brought out another glass. The second wine was much better, but he said it wasn't for sale. When we polished that glass off, between Grandpa, Juan, and myself, he brought out yet another better not-for-sale wine. By this time, several neighbors had come out of their houses and there were a dozen people watching us sip this man's wine. It wasn't clear to us why he would serve us not-for-sale wine. I suspect he was a little embarrassed about the quality of his vintage this year and wanted to raise our opinion of his wine-making, strangers though we may be. With all the onlookers, we were able to get some recommendations about where else in town we could buy wine. No doubt they sent us to a cousin or something. We thanked the man and said adios to his neighbors and set off for this other house.

We found the stop sign and counted three houses down from it, but realized that we didn't know which side of the road our destination was on. So we picked one and knocked. A nice old woman came to the door and informed us that the man we were looking for was across the street. "But wait!" she said, "Don't you want to try what we have here?" She led us to a room with a huge thousand-liter tank of wine and served us a glass. It was better than the first place, but still pretty mediocre. We thanked her and went across the street, now pretty tipsy.

This new guy led us into his home, into his sitting room where his wife was watching television. He fetched a glass from the kitchen and led us to his garage, where he had several large tanks of wine. This wine was much better and we decided to buy. We were going to just decide on that day and then come another day with our big glass wine jugs, but this guy already had lots of 5-liter plastic bottles filled and waiting to sell. Plastic is really a lot easier because you don't have to store the container all year long after it's been emptied. So we bought some wine. Each 5-liter bottle cost 6€. That's 0.90€ ($1.33) per 75 cl bottle. It ain't no Rioja, but it's a pretty good price-value ratio.

Juan took a particularly long time to go get the car (we had walked a couple blocks) to load up with the purchased wine. He later mentioned that he had gone to buy a 5L bottle from the nice old lady for her trouble. Nice.

So the moral of this story is, no need to go to bars when you can just go door-to-door in Esparragosa de la Serena getting free sampler wine in every house.

The pictures below are from a trip to an olive oil factory and a large winery we visited looking for sweeter wine for Grandpa and Marce. 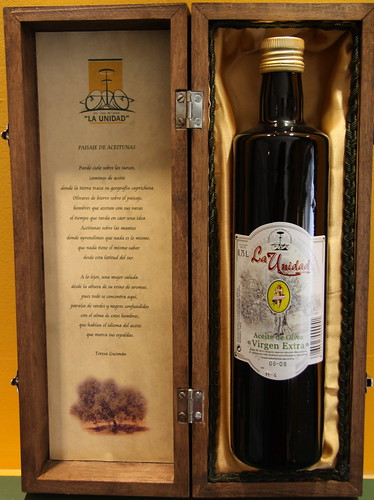 We bought oil in plastic jugs, too. This was just on display in the lobby. 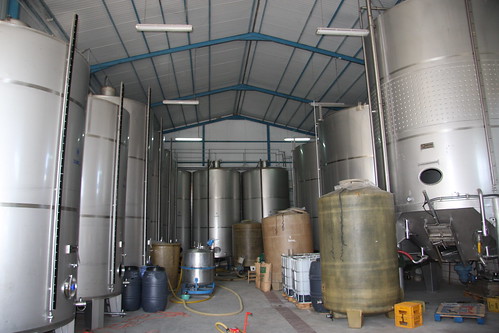 When we arrived to this little winery, this part was open and unmanned. So I started taking photographs, hoping that I would be treated as a tourist and not accused of corporate espionage. 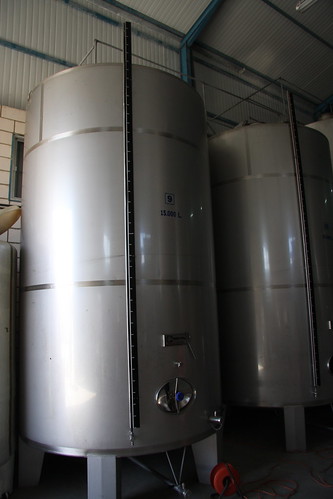 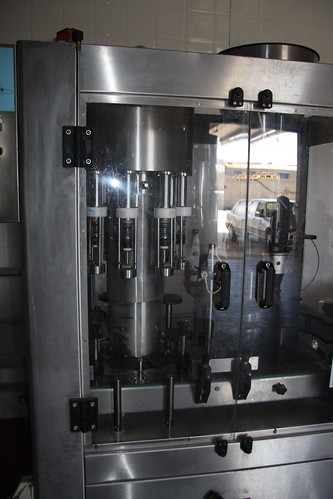 A corking machine with reflection of car and wife.