My father-in-law, when on vacation in Extremadura, gets up at 8:00 every morning to go on long walks around the countryside. Marga and I went with him on short walks a couple times in 2006, but we went out at night a lot that year and you don't really feel like walking 10 km at 8:00 when you've gone to bed at 5:00. In 2007, Marga went with him almost every day. This year, Marga wasn't feeling very well, so we didn't go out much and I was free to go walking with Juan almost every morning. As Juan says, "If you don't go walking in the morning, all we do here is drink, eat, and sleep. You gotta do something to burn some calories!"

In Extremadura in August, the early morning is really the only time that exercise is possible because it just gets too hot. This year was much cooler than most years. Several times when we set out at 8:00, it was pretty chilly. But we always ended up sweating and spending the second half of the walk with our shirts off in the warming morning sun.

All the photos in this post were taken with my iPhone. 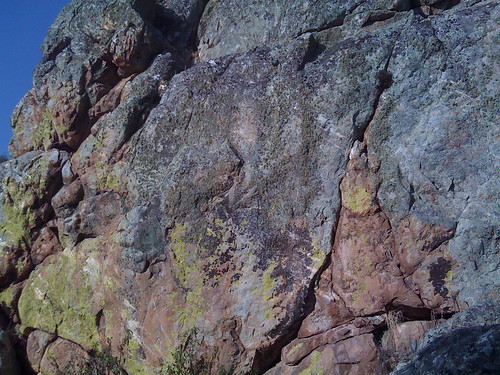 This rock formation jutting out of the fairly flat ground had some cool lichen formations on it. At the ground below the rock, there were lots of plastic flower bouquets. Normally one bouquet would mean that someone died there, so when I saw a dozen, my first thought was "Dear god, what happened here!?" But I didn't think much about it. Juan said that he brought his wife there once and she had the same thought I did, but he let her simmer in intrigue for a week before explaining that a lot of people brought the ashes of their dead relatives to this place, and that's why they also brought flowers. I can maybe, kind of understand bringing flowers to a gravestone to make it prettier, but to an ash dump site? Weird. Nothing makes people more superstitious than the death of a loved one.

One of Juan's favorite pastimes during these walks is spotting hares, rabbits, and quail. He can't read the screen on his mobile, but he can spot leporids on the horizon like an eagle. I am the opposite, of course, so I saw very few hopping blurry blobs. Every 10 minutes or so, he'd say, "Look! A rabbit! See it? Nevermind, it ran behind a tree." Normally the critters were out of sight before I even knew what direction to look in. The few I did see were hopping across the trail 200 meters in front of us. The only one I saw closer than 200 meters was about 100 meters away in a field. As we approached, Juan whispered and pointed to it. When he did, you could see the hare's black ears flatten across its back, almost completely hiding it below the level of the grass. Juan whispered, "Pretend like you didn't see it. We're going to walk another 100 meters and I'm gonna jump over the fence and go get it." Riiiight. You're going to leap over a barbed wire fence and go kill the metaphorical definition of "fast" with a stick. But darned if he didn't squeeze through the fence and go Elmer Fudding on aftew de wascawy wittle buggew. Of course, by the time he got to where it had been, the hare was long, long gone.

These cultural differences still amaze me. Juan grew up poor in an environment where no opportunity to have a good meal should be ignored. Rabbit is a very common meat in Spain, and hare is a delicacy. Once, when I was driving one night in Extremadura, a rabbit made a bad decision and left its life on my bumper. Juan was in the car and said, "Stop the car! Let's go back and get it! We'll have a feast tonight!" I, of course, thought he was joking and kept on driving. Only later did I realize he was serious. When a rabbit runs in front of his car, he swerves towards the rabbit. 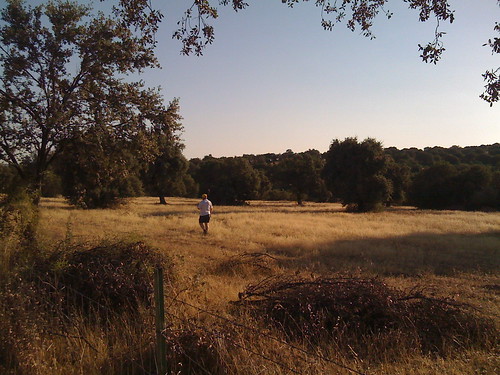 Fudding around in the grass with a big stick. 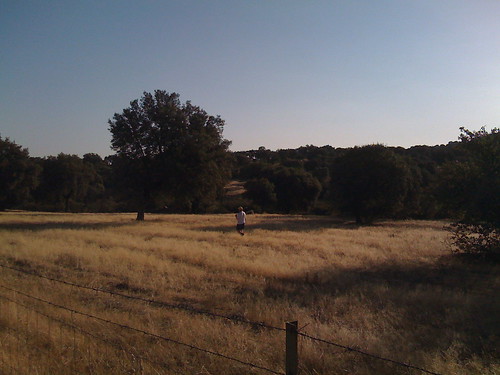 Does this make him my fudder-in-law? 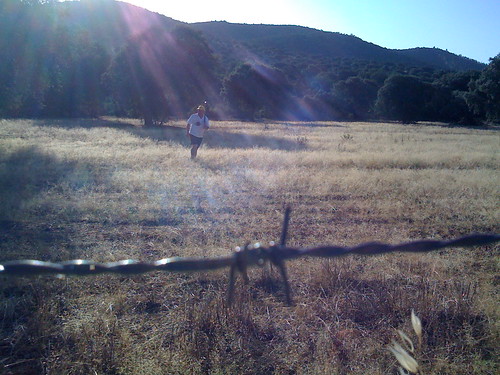 In case you didn't believe me about the fence. I stayed on the sane side the whole time. 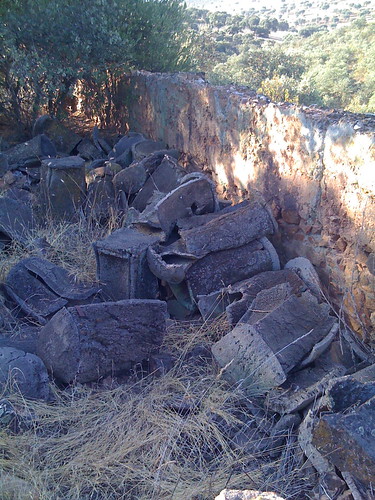 He took me up to a clearing where some people used to keep bees and explained that these boxes made of cork were how the bees were kept. 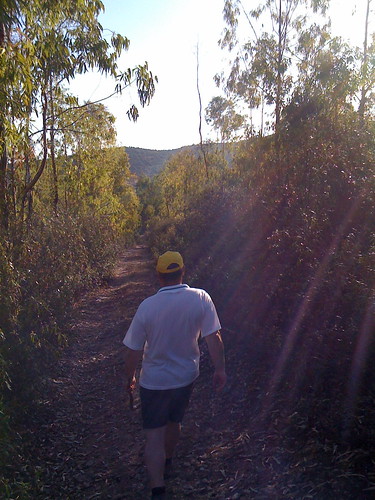 Some of the paths were wooded... 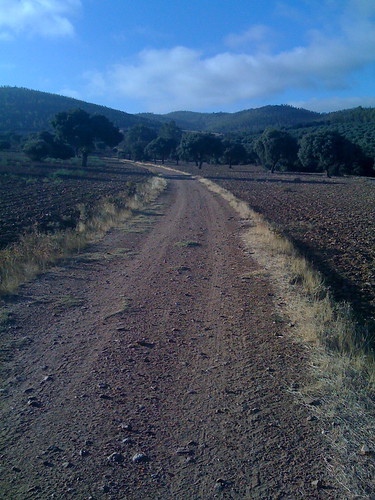 But a lot of them were open like this. I liked the gold lining this dirt road had. 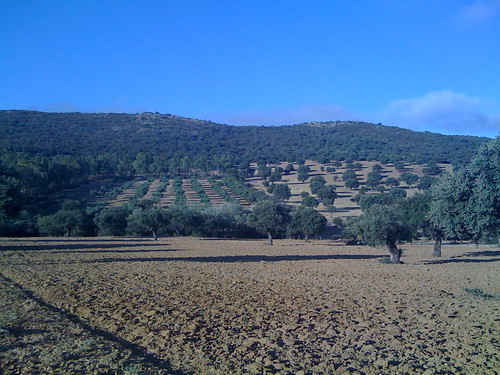 An olive grove on a hill. 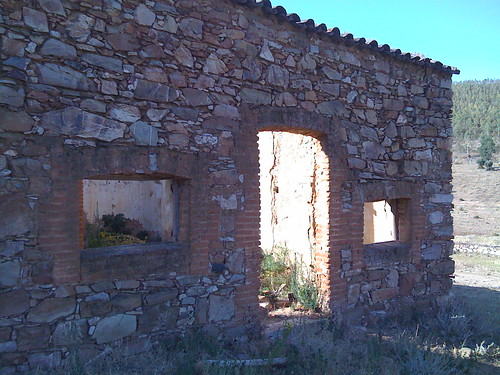 This is the corner of an old cortijo. Cortijos are large structures where the owner of a large piece of land lived, but also with housing for the farm workers. Sort of like a mix between a castle and a plantation. Juan really likes this place and kept saying how great it must have been in its time, saying things like, "Look! The road at the front entrance even had cobblestones!" and "Look! Even the workers' one-room houses had tiles on the floor! Almost no one had tiled floors back then." "And tiles on the roof, too! Nobody had those either!" I was taking all this in and thinking medieval serfdom, with the lord and his serfs. So I asked, how long has this place been abandoned. Juan replied, "I'd say about 50 years." 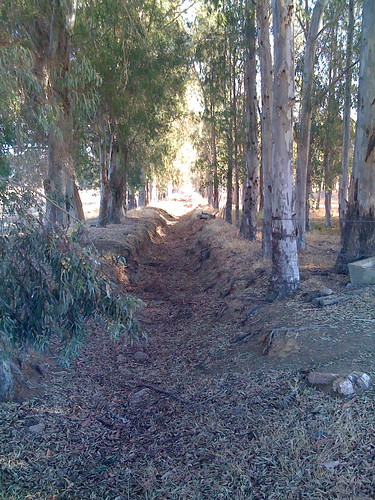 Some of the days we went on new discovery missions, picking paths Juan had never been on just to see where they went. He's like a human GPS (and I had my iPhone 3G), so there was never any danger of getting lost. Several times they turned out to be dead ends and we had to backtrack, but almost always we'd end up on another path that he knew about. One day on a discovery expedition we came across this long, thin grove of trees that were all much taller than the normal holly oak, olive, and fig trees. When we got closer, we saw that they followed a little creek bed that was dry in the summer. Weird. 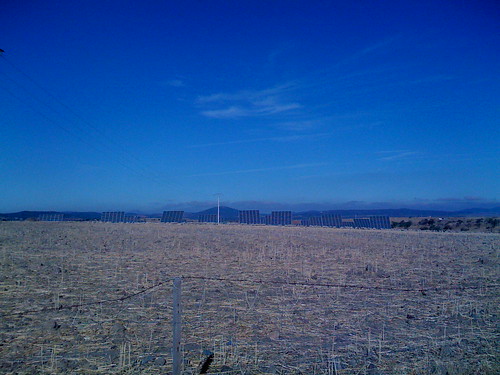 Just this year, solar panels are popping up all across the Spanish countryside. We saw quite a few in Extremadura (look at the sky and you'll see why) and even some in the cloudier Basque country on the trip home. 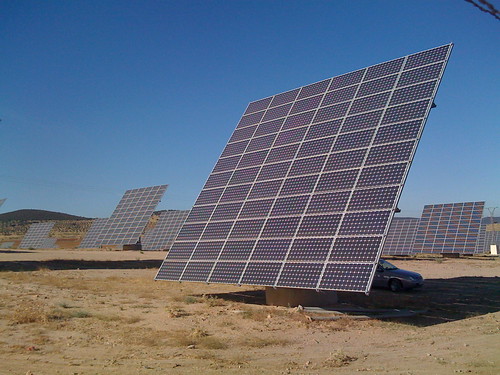 Pretty huge. Check out the car parked in the shade. They seemed to have rotation systems built in so they can "sunflower", but they didn't seem to actually work. Some were pointed away, some straight up, etc.

Juan is excited about showing off the Extremadura lifestyle to my parents when they visit us in August next year. He's all the time talking about "Paul would like this. Paul would like that." The walking stick I was given for the first few walks was way too short, so I found another one on one of the treks. Grandpa trimmed and sanded it a bit for me and it worked very well. So it was determined that Paul and Betsy (my parents) needed walking sticks for next year. On the last day, Juan said, "No walking sticks today. Only a hatchet." About 1.5 km from home we ventured off trail into someone's almond grove and Juan started hacking. The first one we got was the best, with a nice form around the handle. He explained that it's important to cut the wood when it's green and then let it dry out for a year to stiffen and get lighter. We ended up coming home with five potential walking sticks from almond, holly oak, and olive trees. 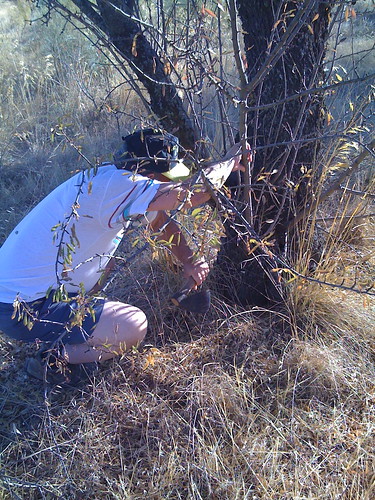 Chopping at the base of the branch. 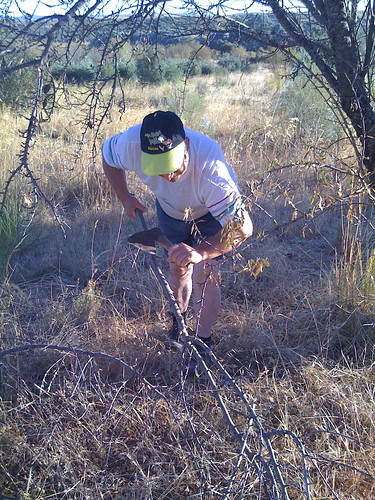 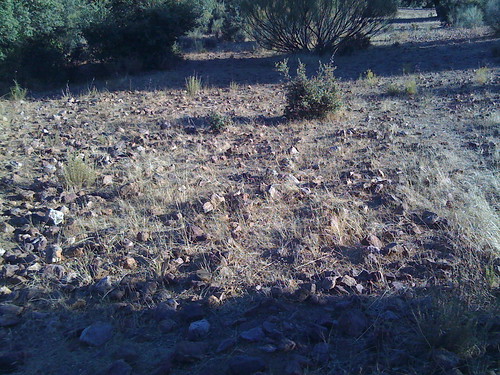 A very, very large percentage of the land that we walked through is full of small rocks. In some places there are about 10 baseball-sized rocks in every square meter. With my limited knowledge of geology, I cannot fathom how this could come to be so. Any ideas? 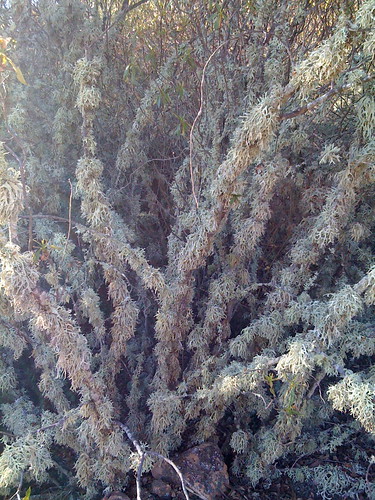 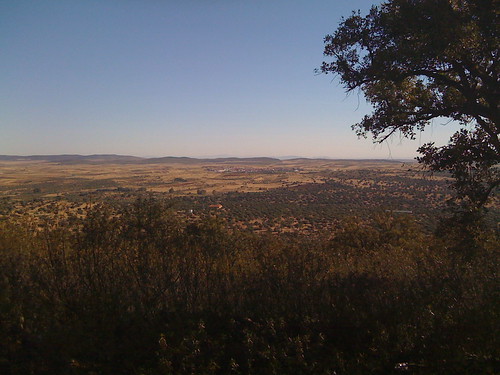 On the last day, carrying a hatchet and extra sticks, we went the farthest away from town. We climbed up the nearest mountain ridge enough to see over the other side to get a full 360Âº view. By "mountain ridge", I mean similar to what you see on the horizon in this photo. This is looking back at Higuera de la Serena, the town we stay in. You can barely see it in the middle of the picture. Here's the full version.

I leave you with a little bit of wisdom Juan gave me about walking up hills.

I suppose the reverse is true as well.