Here it is! The second part of the random photo bin from this year's trip to the south of Spain. The first part can be seen here. The second week we were in town was the annual festival, El Ramo, that is responsible for more than doubling the town's population. Many organized events took place. We even saw a sign advertising a "Nocturnal Photography Marathon". I had brought my tripod and expensive camera and could definitely win that, but there was no date on the poster. We asked when it was and the woman at the town hall reception, who seemed rather clueless, looked through her papers for a bit and told us it was on Saturday, and that I had to sign up at 7 PM and then turn in photos by 12 PM the next day. I was pretty excited. So on Saturday at 7 PM, I went down to the town hall and found a bunch of children in line to sign up for a running "marathon" around the perimeter town. When I asked about the photography "marathon", I was told, rather condescendingly, that, "No, that was two weeks ago. This is a real running marathon today." Pretty disappointing. At least it happened before we got there, so it's not like I missed the opportunity to participate. One of the events, that were mostly for children, was a mop throwing competition. I had already seen a broom throwing competition in Colindres, so I was interested to see how this one would be carried out. 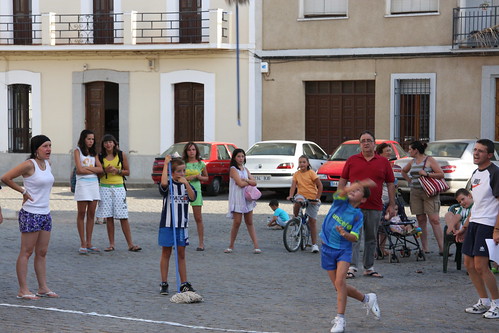 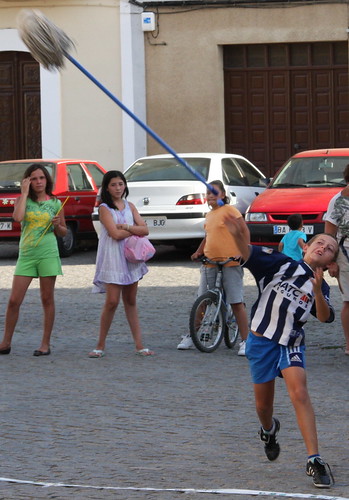 Sports photographers always get the best facial expressions. At least one future girlfriend in the background. 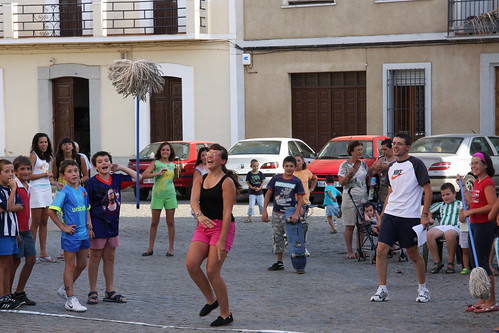 It was interesting to watch the social dynamics I remember from athletic competitions as a child. The strong athletic kids took everything very seriously and the fat weak boys and all the girls didn't even try and laughed mockingly at the idiocy of the competition while secretly envying the athletic kids. 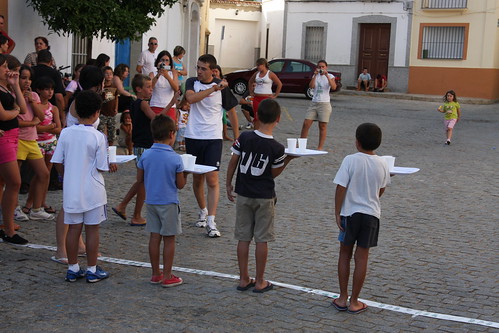 There was also a Waiter Race what involved walking a path without spilling any water. The judging was pretty imprecise on quantity of water spilled. 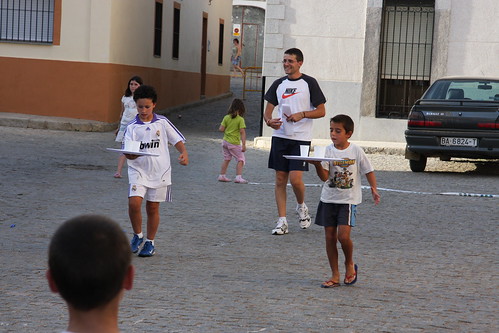 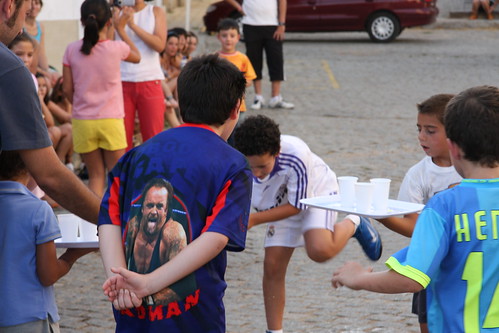 Oops! Love that wrestling shirt. That'll be embarrassing to find in the closet 10 years from now. 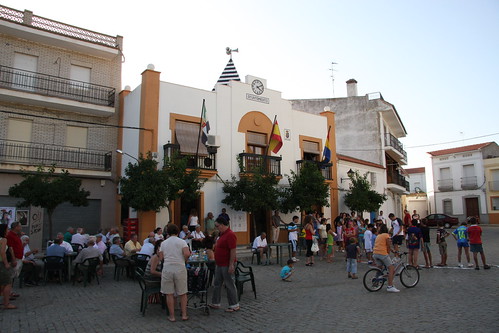 Old men playing cards outside the town hall and parents and children participating in competitions on the right. 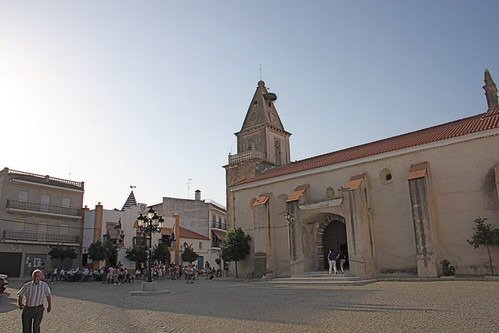 The same shot of the town hall, but from across the square. Grandpa heading towards me. 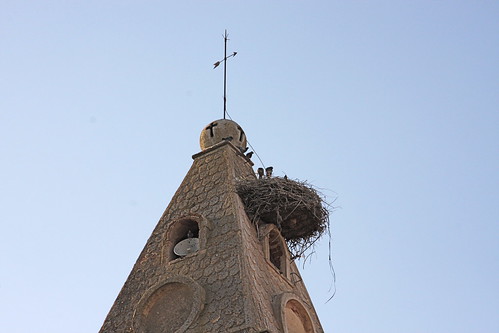 Huge stork nest on the church steeple. Always makes the "But where do stork babies come from?" question pop humorously into my head. 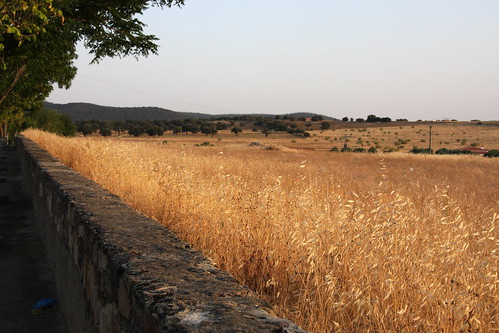 Wheat wall. I love this photograph. 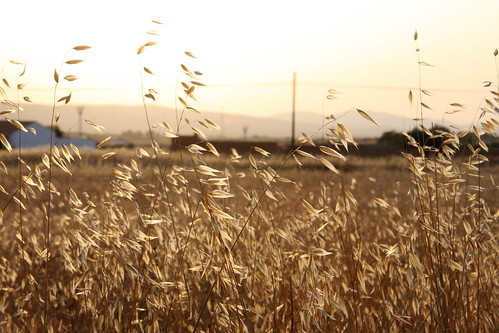 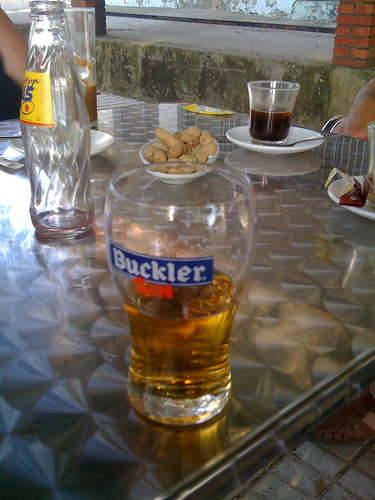 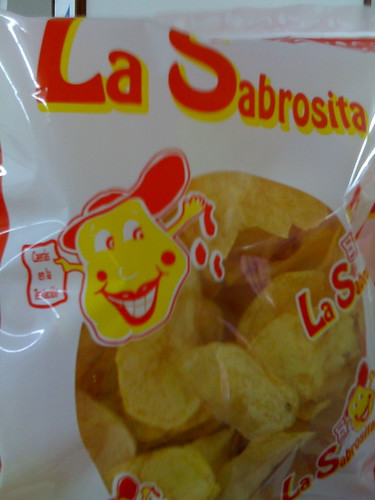 I thought this horrible potato chip bag design was worthy of a photograph. 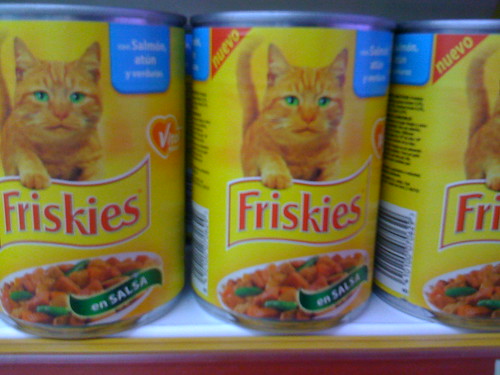 This Friskies can caught my eye, too. My intuition tells me that there are no cats with green eyes. Can someone confirm this? I know that something is wrong about this image, and I'm pretty sure it's the eyes. I suspect the eyes were photoshopped to imply health, as in vegetables are healthy and green. Weird. 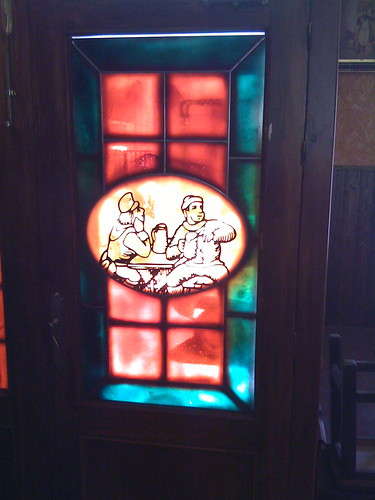 This bar door is awesome. It's Cruzcampo branding, but still cool. 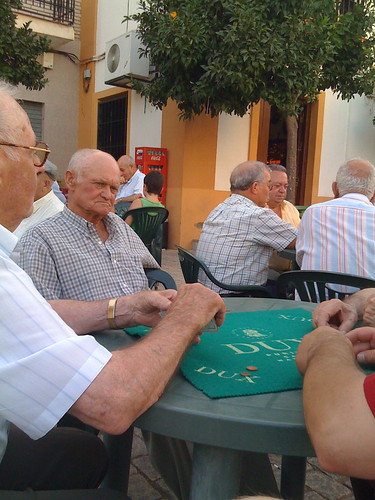 I spent quite a few afternoons playing cards with Grandpa, Juan, and this gentleman, Agustí­n. I like to think that I'm fairly good at trump-based card play, but using the foreign Spanish deck often throws me off and makes me make stupid plays, often resulting in my father-in-law saying something like, "Why would you play the horse when you can play the three which is worth ten points?" Right, right. 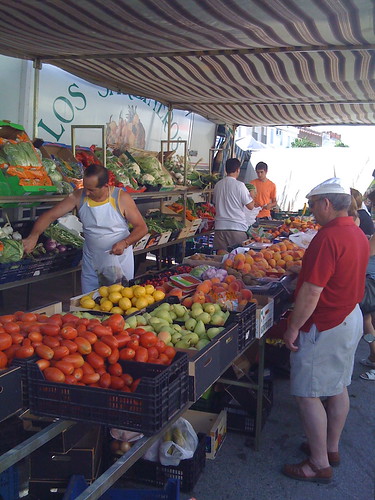 Juan at the town market on Wednesdays. 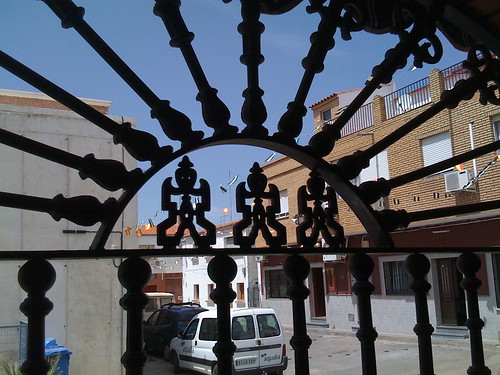 Cool cast iron bars from inside a bar. 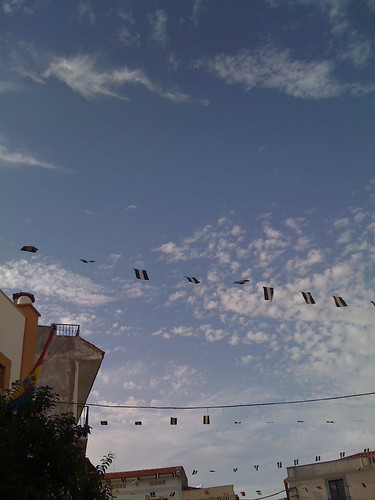 This was about as cloudy as it ever got. Not bad, huh? 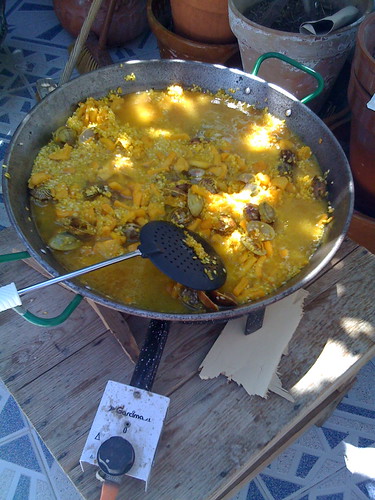 A paella we made one day. 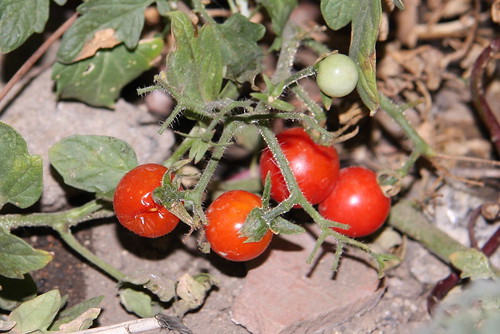 A little cherry tomato plant. They were a lot smaller than they look. 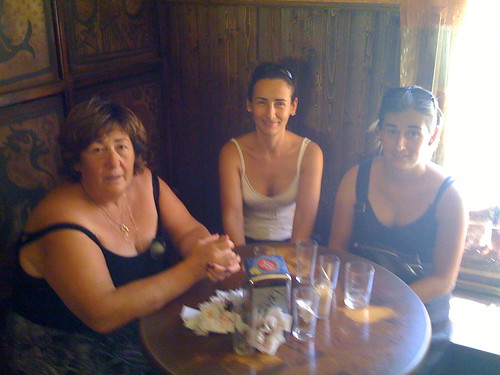 Out for morning drinks with Marce, Marga, and Belén. 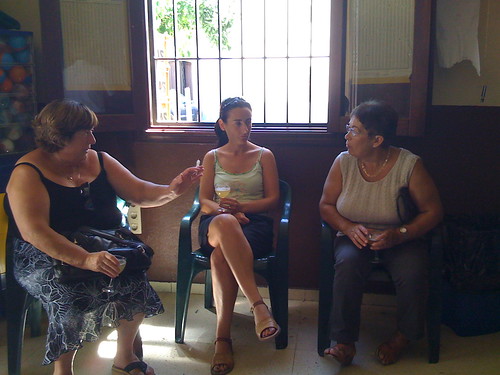 That's it for the uncategorized photos. More stories to come.