We bought a new blender recently. Being myself, I bought the most expensive model that didn't come with extra vacuum packing gadgetry thrown in. This, combined with some extra leftover bread from a few days ago, was enough to push Marga into buying some peeled tomatos and a cucumber to make gazpacho. She's never made gazpacho before, but she's seen and helped her mother do it countless times. So we gave it a try.

Traditional gazpacho is one of those recipes that grew out of necessity and just blending together whatever people had available. It's one food where, no matter how you make it, if you serve it to a large group of Spaniards, everyone will tell you exactly how what you've served is different from how their family usually makes it. Generally, anything that you'd put on a salad is fair game. 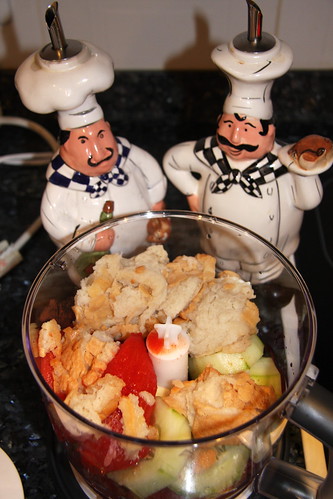 The Salad Chefs oversee the addition of ingredients into the blender. Note that I said only one "fist" of bread, and we have two. Adding too much bread was the only mistake we made. The resulting gazpacho was a little too grainy. 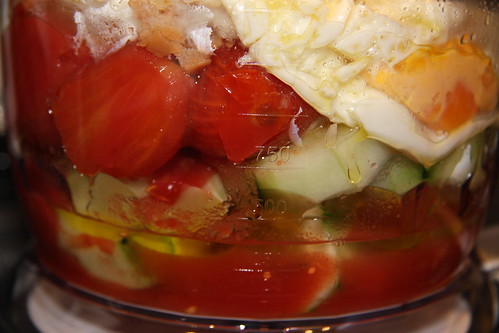 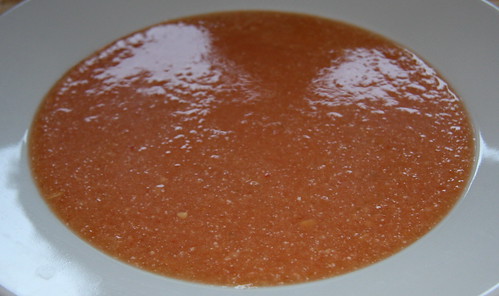 The first few times I tried gazpacho, I didn't really like it. But I think my aversion was more just a general aversion to cold soups, which I have since overcome. One way to trick yourself past the cold soup problem is by serving it in a glass.

Really, if you think about it, eating gazpacho is rather like drinking salad.