In the bathroom where I shower, we have a glass shower stall. After about a week of use, it gets little dots over it and must be cleaned. These are calcium deposits from the water that remain when the droplets dry.

When I was a kid, I always thought it strange that my grandparents had a squeegee in their shower stall. When I was visiting, I used to dry the glass in their shower stall after my showers, not because they asked me to, but because it was fun to pass the rubber squeegee over the glass and watch the water all run down to the bottom. It never occurred to me to ask why they had a squeegee in there. It just seemed fun to me.

About a year ago, it hit me that my grandparents' squeegee was a solution to calcium deposits dirtying the glass. But it took me a year to remember this revelation when I was anywhere other than using or cleaning the shower. Finally we bought a squeegee for the shower! The results were amazing. Immediately there was a difference in the general appearance of the bathroom with the clean glass of the shower stall. It's working really well.

The other day, as I was sliding the squeegee down the glass, exterminating the little droplets, it occurred to me that I found this activity very pleasing in a very OCD way. I certainly don't have diagnosable obsessive-compulsive disorder, but I think that everyone that's at all neat has some subtle chemical imbalance that, when way out of balance, results in full OCD, but normally just controls how generally neat and organized you are. There in the shower, I coined the term "OCDelightful" for any activity that triggers pleasure for reasons of order and neatness. I've submitted it to the Urban Dictionary. When I went to submit its close acronym, OCDelicious, I found, to my surprise, that it is already there! With the proper definition and everything! Amazing. 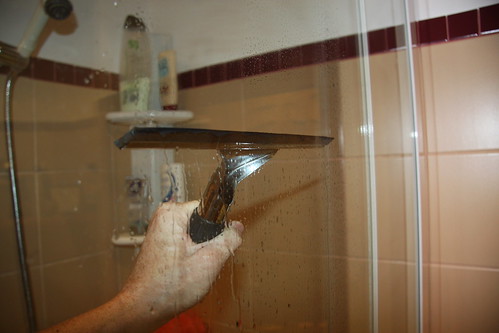 This is a reenactment, since common decency prevents me from sharing a photo of actual showering conditions.

I think that "squeegee" is one of the most awesome words in the English language. Don't you?