A couple months ago, I read this fascinating article about bullfighting in the NY Times. It really is as fair and balanced as I've seen any articles about the controversial Spanish tradition. I highly recommend reading it.

In that article, I learned of a bullfighter named José Tomás, who came out of retirement last year to wow spectators in Barcelona, the stronghold of anti-bullfighting sentiment in Spain. Ever since, the phenomenon that is José Tomás has been snowballing. You know how they say that there's a fine line between bravery and stupidity? Well, most of the people in the bullfighting community, including many professional bullfighters, think that José Tomás has gone way over that line. So when Marga, a fan of bullfighting, saw that JT was coming to Santander this summer, she got pretty excited. She said, "Look, it's pretty clear that this guy's gonna die young, so we need to see him as soon as possible." That pretty much sums up the opinion of all bullfighting aficionados in Spain.

This past Monday, as I was doing my morning email check, I had an email from Marga saying, "Bullfighting ticket sales open at 11:00 AM today. The newspaper says people have been waiting in line since 7:00 PM last night! Can you go at 11:00 AM and buy José Tomás tickets? Please!?" At 10:30, I hopped in the car and, at 11:00 sharp, was climbing the stairs from the underground parking into the Santander town hall square where the ticket sales take place. What I saw amazed me. The line went up and down the entire square three times. I found the end and got in line.

Conversations began with people near me in line and we sent a teenager from our group up to scout out what was happening at the front of the line. We learned that, in the first 40 minutes of sales, only 20 people had bought tickets. This didn't bode well for us in the back with over a thousand people ahead of us. We also learned that the ticket booths would close at 2:00 PM that day. Those two facts were enough for any reasonable person to give up. But then we heard, from our scout, that the vast majority of the José Tomás tickets had been "reserved" by the Town Hall for itself, pretty much guaranteeing that only a small number of ticket buyers would get to see the bullfighting legend. As in most things in life, it's all about who you know. Since I was there on orders to buy only JT tickets, there was clearly no reason to stay. So I left. 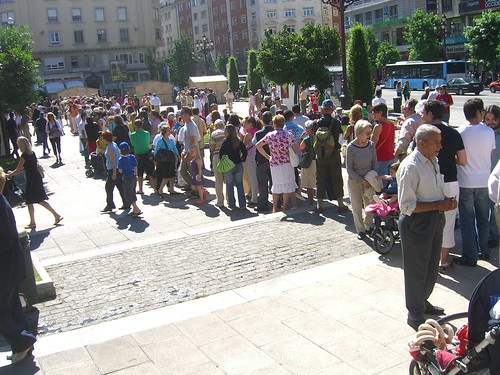 The view from the back of the line.

A complete panorama of the entire square full of people. See larger.