We didn't really have any plans this weekend. On Saturday it was drizzling all day long, so we didn't leave the house much. But on Sunday we decided, "Heck, the biggest party in the world right now is only 2 hours away. People travel from literally the other side of the world to go to it. We should go!"

Plus, it gave me a chance to meet a second person on my blogroll. This is the second person that I have actually had a beer with after meeting them, and following their life, on the internet. You may recall the first was when I spotted Scott from South Dakota, an American video blogger in Laredo, in a local bar. I've been following the lives of Theresa, an americana in Pamplona (The Rain in Spain... on my blogroll), and her family for well over a year now.

So I sent Theresa an email, we exchanged mobile numbers, Marga and I watched the Sunday morning bull run live on television, and off we went to Pamplona! Upon arrival, we parked in just about the first parking lot we could find, knowing that getting close to the city center would mean parking frustration. We parked and noticed that almost all the other cars in the parking lot had people in San Fermin attire passed out in them. Cheap hotels. As we walked the 2 kilometers or so into the city center, the number of people in the streets slowly grew, and eventually we were in the middle of the packed, most famous cobblestone street in all of Spain.

The ambiance at noon during San Fermin is probably the most calm and tranquil as it gets throughout the nine day festival, and it was still what, in any other place, could be considered riotous. This was the time of middle-aged people and families with small children to be out and about. Still, there were a few stragglers from the night before. As we entered various bars, half-closed-eyelid staggering men would try to touch Marga and put their face in front of hers, etc. But she knew to just push them aside and continue. The drunks never felt the rejection for more than a second before tottering off toward some other female.

After a few pintxos we walked three blocks in any direction and found a restaurant with only locals in it and had a quick meal that closely resembled a Full English Breakfast. More walking with an occasional entrance into a bar to use the bathroom and have another beer, and eventually we met up with Theresa and her family. 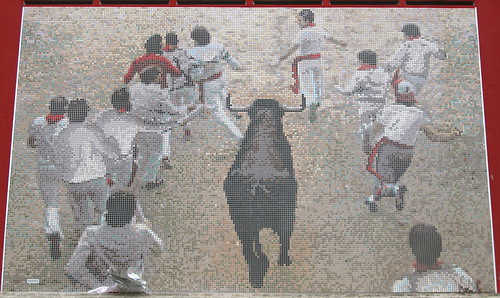 An awesome bull run mosaic on the side of the Pamplona bullring. 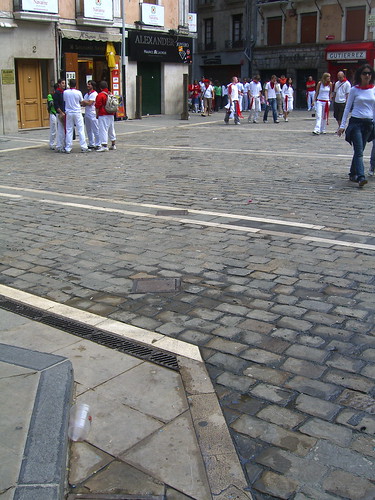 I took this so you can see the fence post holes neatly cut and covered in the cobblestone square in front of the town hall. 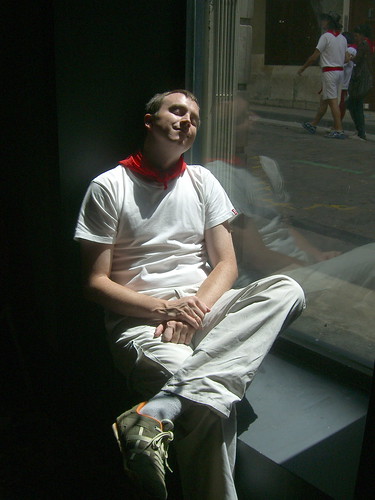 In one of the bars, the only place to sit was this window ledge where the sun came in and was absolutely heavenly. It was a little chilly and I had only worn short sleeves, so it was nice to warm back up in the bars. 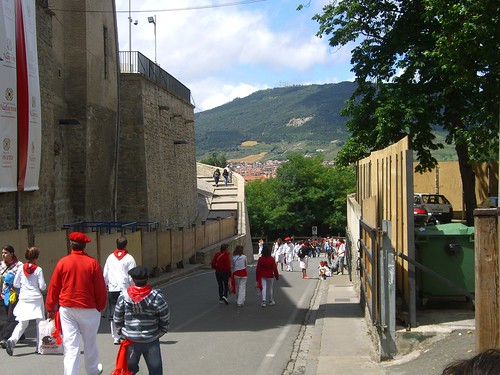 Walking along the bull run towards where the bulls are released. 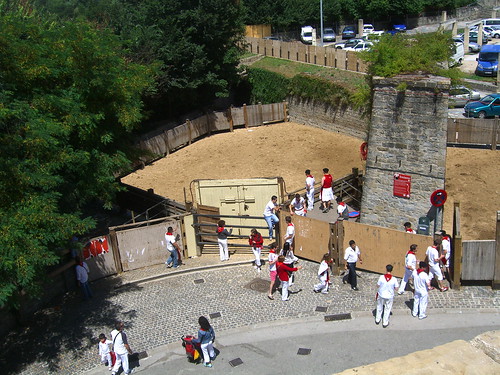 Looking down into the bull pen where it all starts every morning at 8:00 during the festival. 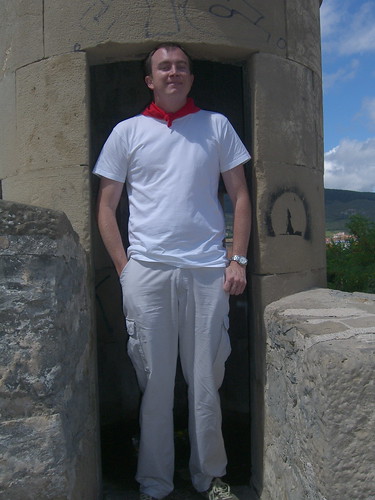 Goofing around in a guard tower that's part of the original town wall. Theresa's husband explained to us that the town of Pamplona has only spread outside its original medieval wall in the last 100 years. So everything outside the wall is very new, by European standards. 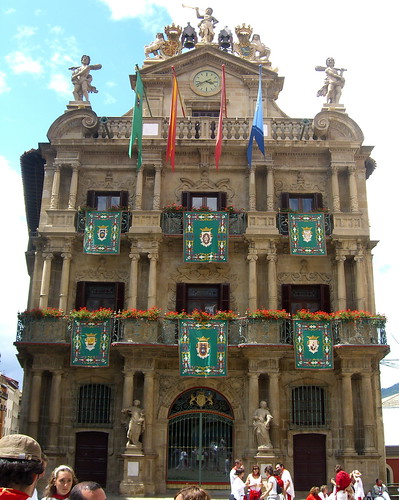 The Pamplona town hall is beautiful. 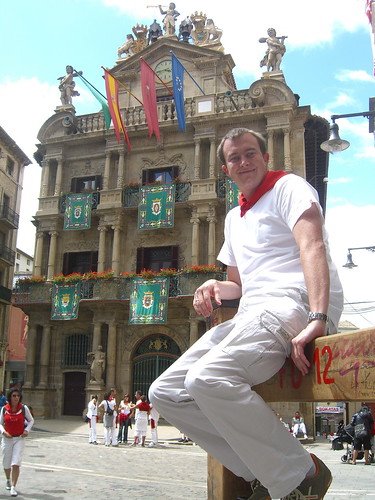 Sitting on one of the only pieces of bull run fence still up in the early afternoon. 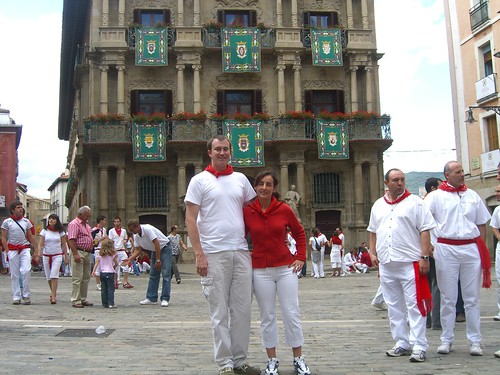 This video is a good example of the types of sights and sounds on the streets of Pamplona. 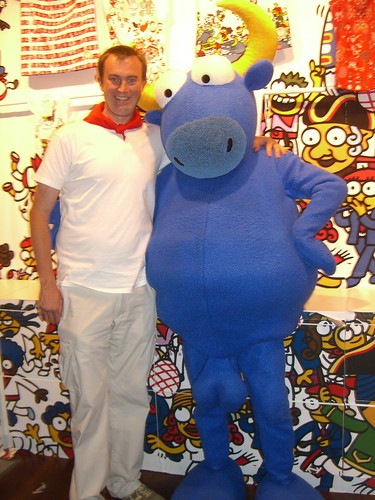 We walked into a tourist shop where there was a big blue bull sitting on the counter. As we walked in, he waved at us. I nudged Marga and said, "Boy that's a tough job, huh?" But she hadn't noticed that it wasn't just a stuffed animatronic critter. I asked Señor Toro if we could pose for a photo. If I'd had one more beer beforehand, I might have had the nerve to grab his, um, danglers, for the photo. 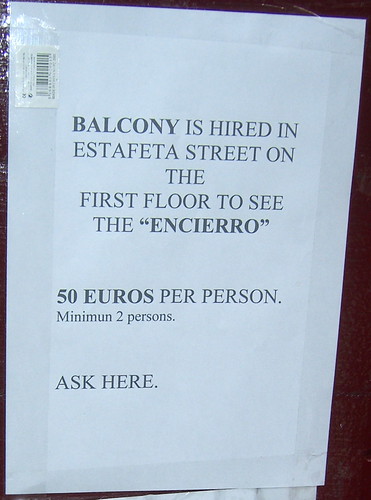 In case you were wondering how much it costs to see a bull run from a balcony... 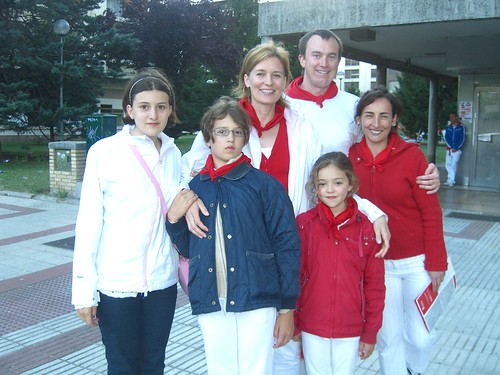 Bloggers unite! Theresa, and her daughters with Marga and me. 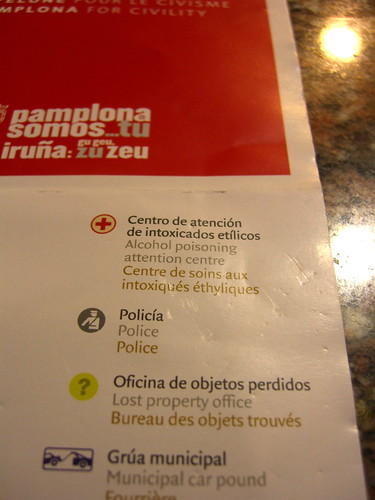 We found this legend of a Pamplona map rather humorous/sad/good. There were four Alcohol Poisoning Attention Centers on the map.

I have to say that I am 2-for-2 with meeting people on the internet. Like Scott, Theresa and her family were wonderfully charming and interesting to talk to. Her daughters were kind enough to greet me, but didn't say much after that. They seem to be at an age when strangers are to be observed, not interacted with. One of Theresa's friends that was with them is actually from the tiny, tiny, tiny town where Marga's grandfather was born in Extremadura and a five-minute drive from where we stay down there in August. Stuff like that is always pretty shocking.

We're very glad we went and experienced the unique atmosphere that is San Fermin this year. We had such a good time, we were reluctant to leave. ¡Gracias por tu hospitalidad, Theresa!

Epilogue: On the way home, we stopped at a gas station just outside of Bilbao. As I was pumping gas, a guy my age got out of the car behind ours and asked, "D'you have a good time in Pamplona?" Confused, I said, "Yes, we did." A minute later, I remembered I was still wearing my red scarf which clearly informed anyone who saw me where I had been that day. You forget about those things when you spend the day with like-dressed people. Funny.