Part of the wedding package that we purchased with the videographer that filmed our wedding was a "Paseo de solteros" (Singles' stroll) that involves being filmed in scenic locations where we live walking around holding hands, giggling, smiling, caressing and generally looking "in love" to be placed at the beginning of the wedding video. We ran out of time to do it before the actual wedding like you're supposed to. And the summer of 2007 was exceedingly crappy. But apparently doing it post-wedding is fairly common. Of course after we got back from the honeymoon, it was November, and we really didn't want to have our video showing us strolling on the beach with scarves on. So we waited...and waited... Marga is off of work this week, so we decided we'd do it this week. We decided on yesterday, but then it was foggy, rainy, and stormy all day long. But when we woke up this morning (groggily after celebrating an amazing soccer victory against Russia), we knew that today was the day. We called up the videographer, who lives an hour east of here in the heart of the Basque Country, and we went about making our final music and photograph choices and, more importantly, deciding what clothes to wear on the video that we will have forever to look back on how young we once were. When the videographer arrived, we headed down to the port to get footage of the fishing boats, the heart and soul of Colindres. Then we went out to the lighthouse for some more hand-in-hand walking and staring at each other. Once, the videographer was getting a still shot of some iconic boats and bridges, and a kayaker whisked by in a bright yellow kayak right on queue.

After a few more shots of the fishing boats, we headed to the town hall. The alameda in front of the town hall is particularly nice this time of year. More walking and hand-holding. We fondled a flower for a few seconds before I picked it to give to her. Later, in post-production, he will make that clip all black-and-white except for the flower. I was unfamiliar with the verb arrancar, which I know to mean start up a car or boot a computer, being used in the sense of "to pick [a flower]", although apparently that's its first definition. So there we were fondling the flower together and the video guy is saying "¡Arráncala! ¡Arráncala!", and I'm trying to figure out how to "boot up" this flower. Marga told me to "Cógela," which I understood finally.

The other word I learned today was guiñar, which means "to wink". In one of our numerous "staring and smiling" scenes, the "director" said, "¡Guiñale! ¡Guiñale!", which sounds rather dirty, really, so I took it to be some sort of euphemism for kiss. Oops. I got it right on take two, though. 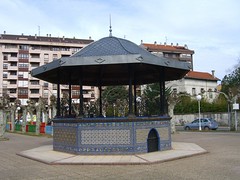 Also near the town hall is the kiosko, which I was filmed lifting Marga up onto before more Oscar-worthy staring and giggling was performed. There was a group of about 8 kids playing soccer on the concrete nearby. They were enthralled with the video camera and the importance of what must be going on. "When is this gonna be on TV!?" they kept asking. This was when the videographer's experience and creativity became apparent. He told the boys to sit down on a bench and gave them some direction. With the video rolling, he gave the command and they all pointed at us with mouths agape and on the second command, they slapped their hands over their eyes. It took four or five takes because one kid would always forget some part of it, but in the end, it turned out great. Then he turned the camera around and filmed the kiss that they had been reacting to. I'm dying to see how it comes out after editing.

The boys immediately demanded some kind of payment for their performance. Bidding started at 5€ each, which was completely ignored by the videographer. Then down to 1€ each, which the videographer said was way too high. One kid kept going down to 0.10€ each. Finally the videographer came up with a solution. We still had a couple more things to film a few meters away, so to keep the kids out of our hair, he suggested that they hold a competition to see who can kick the ball in the air the most number of times without it hitting the ground, and the winner would get a euro. In theory, this was a good plan, but in practice it took them about 60 seconds to all take turns and determine a winner. He made them wait until we were loading the camera back into his car before giving them the euro. One kid said, "Look, if you don't want to give the euro, that's fine. We'll take either the camera or your BMW instead, if you prefer." Cheeky lad.

Next we had to go up high to get a sweeping panorama of Colindres. Of course I knew just where to go. The view up there was absolutely breathtaking. Even on our clearest days, there is often a haze from the sea, but today was the highest visibility I've witnessed here. The weather today was better than any single day in 2007. The temperature was perfect, with just a little breeze. With summer flowers in full bloom, Colindres definitely looked her best. We couldn't have asked for a better day.

After a quick pan from a street corner in the center of town, we headed for the beach in Laredo. We did some walking hand-in-hand in the sand, and then filmed one of those cheesy clichéd "running towards each other, embracing, spinning, kissing" routines in the surf. And we were done. And a little wet.

Both Marga and I are soooo happy to finally have this out of the way, and we're dying to see the result.

And boy did it feel weird to spend the morning without my wedding ring on!